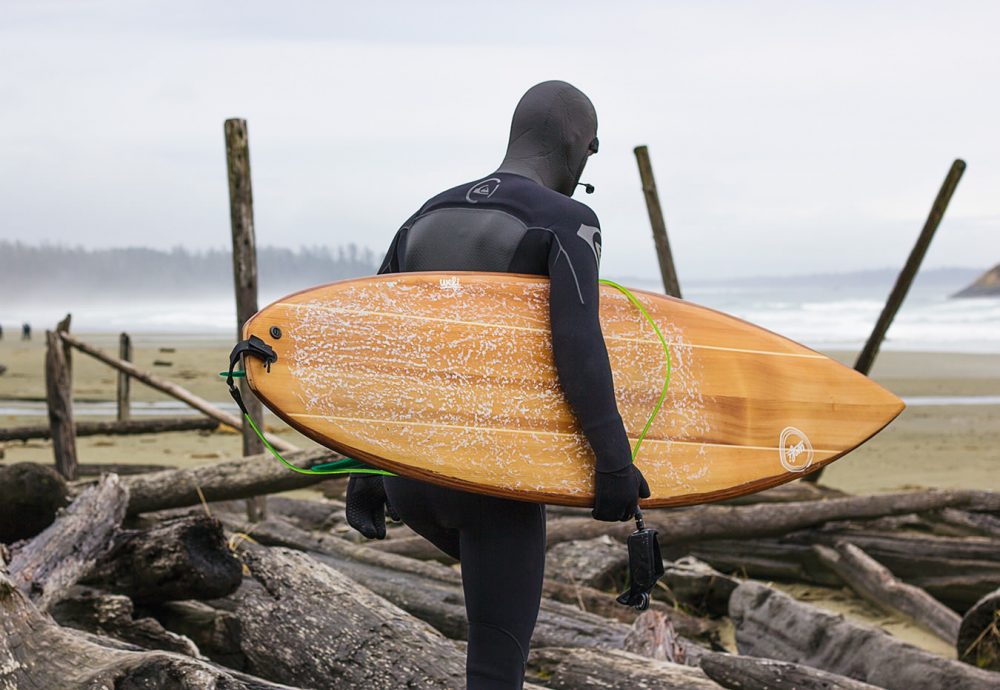 When it comes to surfboards, Randy Weflen spares no expense. His boards are meticulously hand-crafted from local wood, combining time-honoured boat-building methods with advanced technology to make the boards lighter and stronger than ever. After a brief hiatus of a few years, he’s back in his Vancouver Island surfboard (and paddle board) studio, reinvigorated. In this article from our archives, experienced West Coast surfers tell us what makes a Wefi board so special.

The vision and sounds of a 19th-century wooden sailing ship creaking and sighing as it rolls over the open ocean fill the air as you step into Randy Weflen’s Lantzville workshop on Vancouver Island. It’s a bit odd, considering Weflen hasn’t built boats for years, yet there’s something about the coaxing, bending, and massaging of wood into crafts as pure in their form as their function that immediately draws you back in time. That is, until Weflen’s humble and amicable banter snaps you back to current day.

“The biggest feedback I get is the energy they give off. I think it’s a buoyancy thing,” he says of the exquisite wave-riding works of art he began crafting about 10 years ago. “The boards are totally hollow. On the water you feel every part of the wave with your feet, but they’re light still—90 per cent air—and they just resonate a lot more than a foam board. The wood just has more energy.”

For surfers, the “feel” Weflen speaks about makes a profound difference in the wave riding experience. Raph Bruhwiler, a Tofino-based pro who has been surfing for over 30 years, has put Weflen’s high-performance shortboards to the test, calling them “the most crazy ride” he’s had in years, while lauding Weflen’s exquisite detail in woodwork. And Vancouver Island longboarder Emily Ballard says that not only does her 9’6″ Wefi board—as Weflen’s creations are known—perform on waves, but there’s also something “mystical in how it sounds when I paddle out and the way the water slaps the board. It feels so natural there in the water. It’s like the board lets me come along for the ride.” 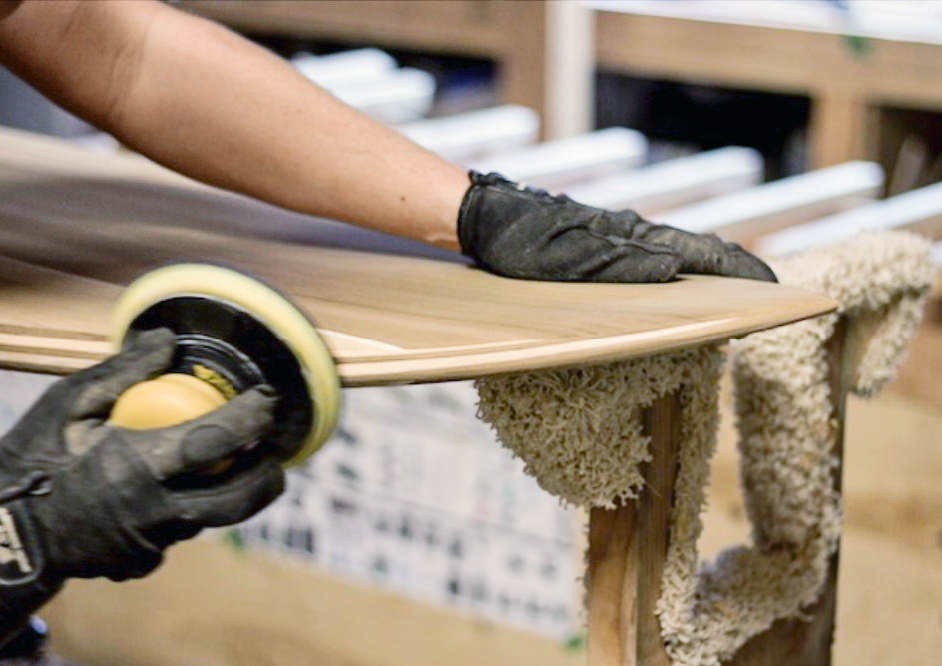 Typically, modern surfboards are made of foam and fibreglass, a lightweight but also fragile combination. Quite quickly, foam boards dent from the pressure of the rider’s heels and get dings and pressure cracks. From their toxic inception to their short lifespan, there’s nothing eco-friendly about them.

A Wefi board shines in its durability, its long life expectancy akin to that of a cedar-plank canoe or kayak. The Ministry of Forests even did a study on Weflen’s shop, and the surfboard shaper discovered he’s—unintentionally—running a very green show.

“So from cutting the tree down, logging it, shipping it, milling it, and bringing it here, I’m still only storing 300 grams of carbon. A traditional foam board can produce 460 pounds of carbon. Isn’t that crazy?” he says.

The path from prototype to the beautiful boards he ships around the world today wasn’t swift, and we all can be happy that Weflen—who will be the first to tell you about his short attention span—stuck with it. He summarizes his career history about as quickly as you can imagine it evolving: “I was born and raised here in Lantzville. After high school, I moved to Victoria for five years and worked on boats, and somewhere in that time I got sick of boats and wanted to get into the aerospace industry. So I did. But then September 11th happened, and there was no work on planes so I went back to boats and worked on private yachts. Then I moved back to Lantzville for some reason.”

Woodworking, however, is in his blood. He still uses tools passed down from his great-grandfather, a Norwegian furniture maker who had a ticket on RMS Titanic, but fortunately missed the boat. Weflen’s own father began teaching him carpentry at the age of seven. And when he moved back to Lantzville he paid the rent making spiral staircases, and had a good reputation around Vancouver Island for his work. “But I get bored with the usual stuff,” he says. “I was going to explore firefighting next, but then I stumbled into doing this at night, and it took off.”

Perhaps in case he gets bored again and meanders in a different directions, Weflen wants to teach others his tricks of the trade. “That was always the plan. I want to run classrooms where people can come in and build their own board. You can make it whatever size you want, and it’s going to perform. You’re going to want to ride it. It’s not something you’re just going to hang on a wall,” he says.

Ballard, however, begs to differ. “Even if you can’t surf,” she says, “it’s just an incredibly beautiful piece of art.”

This article from our archives was originally published in our Summer 2013 issue, and was updated April 20, 2021. Read more Community stories.