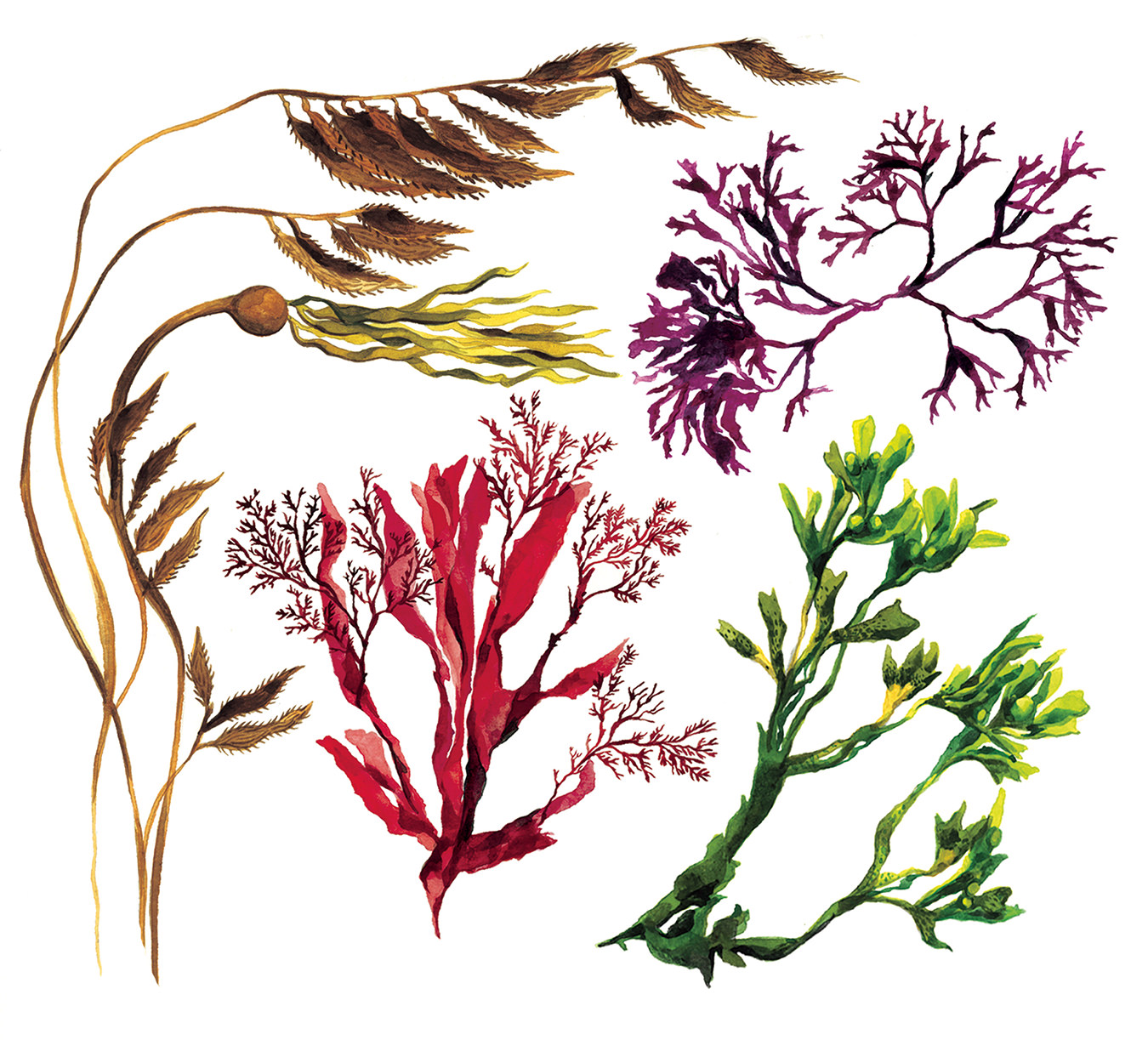 Seaweed foraging is not a typical job task, but it’s all in a day’s work for Tanya Droege. Paddling her kayak around rocky waterfronts stretching from Vancouver Island to the Sunshine Coast, she spends summer days trawling the shoreline in search of kelp that serves as the faithful building block to her burgeoning seaweed-infused skin care line, SeaLuxe. Her patient combing pays off. At low tide, large brown underwater Nereocystis luetkeana forests float to the surface, offering their fronds up to be cut, washed, and sun-dried before Droege begins distilling their transformative power into hand-coiled-rope-topped jars.

From gunpowder to fertilizer, seaweed has long been enjoyed on terra firma for its myriad benefits. Nori has figured in the Japanese diet for over 1,000 years, while Mediterranean seaweed was favoured by the Greeks and Romans for its medicinal properties. But it’s only recently that North Americans are cottoning on to the cosmetic potency of these ancient, salt-water-dwelling plants. “Seaweed is the perfect source for vitamins A, B, C, and E, as well as minerals and amino acids—its key vitamins stimulate blood flow, which help speed up the ability of the amino acids to build protein,” says Droege. “It renews and repairs skin.” In other words, seaweed might be the holy grail of anti-aging skin care.

Droege first learned about seaweed as a teen, when she had a thyroid disorder that led to cancer, and had to get two-thirds of her thyroid removed. The plant has natural high levels of iodine—an ingredient crucial for regulating thyroids; she now eats it every day so the cancer doesn’t come back in the remaining part of the gland. She pledged to educate others about seaweed’s power, devoting herself to studying how it helps restore skin’s pH balance (to combat acne), release toxins, and repair sun-damaged cells. It was 20 years in the making, but her natural botanical line—from cleansing grains and clay masks to body butters and detoxifying bath soaks—finally launched last summer. The collection harnesses the power of seven seaweeds: kelp as an anti-aging protein builder; bladderwrack to combat inflammation and irritation; dulse for moisturizing; nori as a nutrient-dense skin softener; wakame to nourish and protect; Irish moss to condition; and spirulina to aid in toxin removal. Because each batch is handmade, availability is still small-scale. Droege will soon have to take it to the next step, though: “I’ve had four emails just this week from stores wanting to carry it!”

Seaweed might be the holy grail of anti-aging skin care.

Seaweed’s rise in popularity is, in large part, due to the science behind its efficacy. “All around the world, for centuries, we’ve had all these cultural, coastal, and First Nations stories about seaweed’s benefits, but they’ve always been anecdotal; we’re now taking the anecdotal and putting it into the hypothesis stage, which is the basis of all good science,” says Diane Bernard, the de facto cosmetic-seaweed pioneer based in Sooke, British Columbia. After working extensively with chefs to convince them of the merits of seaweed in the 1990s, she moved to seaweed-in-skin-care in the early 2000s after alighting upon the idea that “what’s good for you internally is good for you externally.” Now, her 29-piece collection Seaflora, which uses USDA-certified organic wild seaweed, is found all over the world, from Shangri-La Hotel Vancouver’s Chi, The Spa (home to the city’s exclusive Sea Therapy Facial) to remote boutiques in Shanghai. “Science is finding that seaweed can help burn victims, and can aid scar tissue healing, irritated skin, eczema, rosacea, and more,” says Bernard.

The West Coast is primed to make use of this natural resource. World-renowned phycologist Sandra Lindstrom and her team from the University of British Columbia have studied many of the more than 600 species of wild seaweed that they have identified as growing on the Pacific Northwest shores, and she says that the largest seaweeds in the world grow along the West Coast. As such, Bernard’s wild seaweed tours are chock-full of her spa and wholesale clients who want to learn more about this untapped natural resource. “We have the cleanest, the healthiest, the best seaweed,” she says. “There is just nothing like this anywhere else in the world.”

Also harnessing these untamed local resources is Vancouver Island alchemist and paramedical aesthetician Shelley Rollick-Collins, who launched her ultra-luxe Bénir Beauty line three years ago. In her BV-9 Platinum Provectus Super Serum, seaweed extract is the first-listed ingredient. “It’s very hydrating and has natural hyaluronic acid, which helps tighten skin,” she says. To be sure, all this skin care that mines seaweed’s vitamins, minerals, and omegas sounds almost good enough to eat. And it is: think of it as food for the face.

Freshen up with more beauty stories.