Hermès has christened 2019 “The Year of Dreams,” the theme popping up in imaginative ways across their product line, notably on a silk scarf where the surreal pattern features dragons, monkeys, and even a unicorn, prowling around the Kremlin and other global landmarks.

But the theme is more personal to Hermès Canada president and CEO Jennifer Carter, because this is the year one of her own dreams is coming true.

Carter is moving into the premises she first wanted as a home for Hermès Vancouver when she started rolling out the company back in the mid-1990s. “I’ve always loved that building,” she says, referring to the Burrard Building designed by renowned Vancouver architect C.B.K. Van Norman in 1955. But five tenants—including a hairdressing school and Bell—occupied the corner she coveted, so she switched gears, opening a boutique within Holt Renfrew, then later building a freestanding store at Burrard and Alberni. But Carter never let the idea of the Burrard Building go, waiting patiently over decades for those five leases to end, and working with “a very patient landlord.”

The doors of her dazzling new Vancouver flagship will open later this year. Designed by Parisian architecture agency RDAI, under the artistic direction of Denis Montel and interior architect Véronique Duchesne, the building boasts a façade of moulded concrete, translucent glass canopies and recessed windows trimmed in bronze. Inside, Hermès aficionados will recognize the terrazzo floor with ex-libris and “Faubourg” patterned mosaic. Unique features include a Pegasus flying horse relief by sculptor Christian Renonciat located by the floating oak and glass staircase. With aqua and terracotta tones employed throughout to reflect the region’s land and sea, the store took more than a year to complete.

But that’s business the Hermès way. In an era of fast fashion and instant gratification, Hermès is in no rush. “This is the sixth generation running the show,” Carter says, referring to CEO Axel Dumas and creative director Pierre-Alexis Dumas. “And they are staying true to their roots. They are very quiet, and very prudent, and they do things slowly, but they do them properly.”

Nowhere is that maxim more evident than in the time it takes to craft Hermès leather goods. If you’re picturing an assembly line of harried workers madly stitching one piece then tossing it to the next, forget it. One artisan, trained over several years, makes an item start to finish at their own personally outfitted worktable in one of the many workshops in towns and villages throughout France. A saddle takes 30 hours to cut and sew, and the process is even longer for a bespoke order because both horse and rider are meticulously measured to ensure a perfect fit.

A famously waitlisted Birkin bag takes 48 hours to craft, and Carter had to put in an order a year ago for special items to celebrate the opening of the new store. “We’ll have some fun spins on the Kelly bag, and roller skates that connect to an Hermès runner—because people like to roller skate around the seawall, and it’s fun. When was the last time you saw Hermès roller skates?” She laughs. “Never!”

Special orders are made by Horizons—a division within Hermès solely dedicated to making “dreams come true” that will offer consultations at the Vancouver flagship. Horizons has kitted out Aston Martins, super-yachts, and private jets, but will also deliver smaller items such as a skateboard or yoga mat, “and it won’t be commercialized. It will just be for you,” Carter notes. One gentleman ordered a green lambskin bag in the shape of an apple for his wife to carry her daily snack. 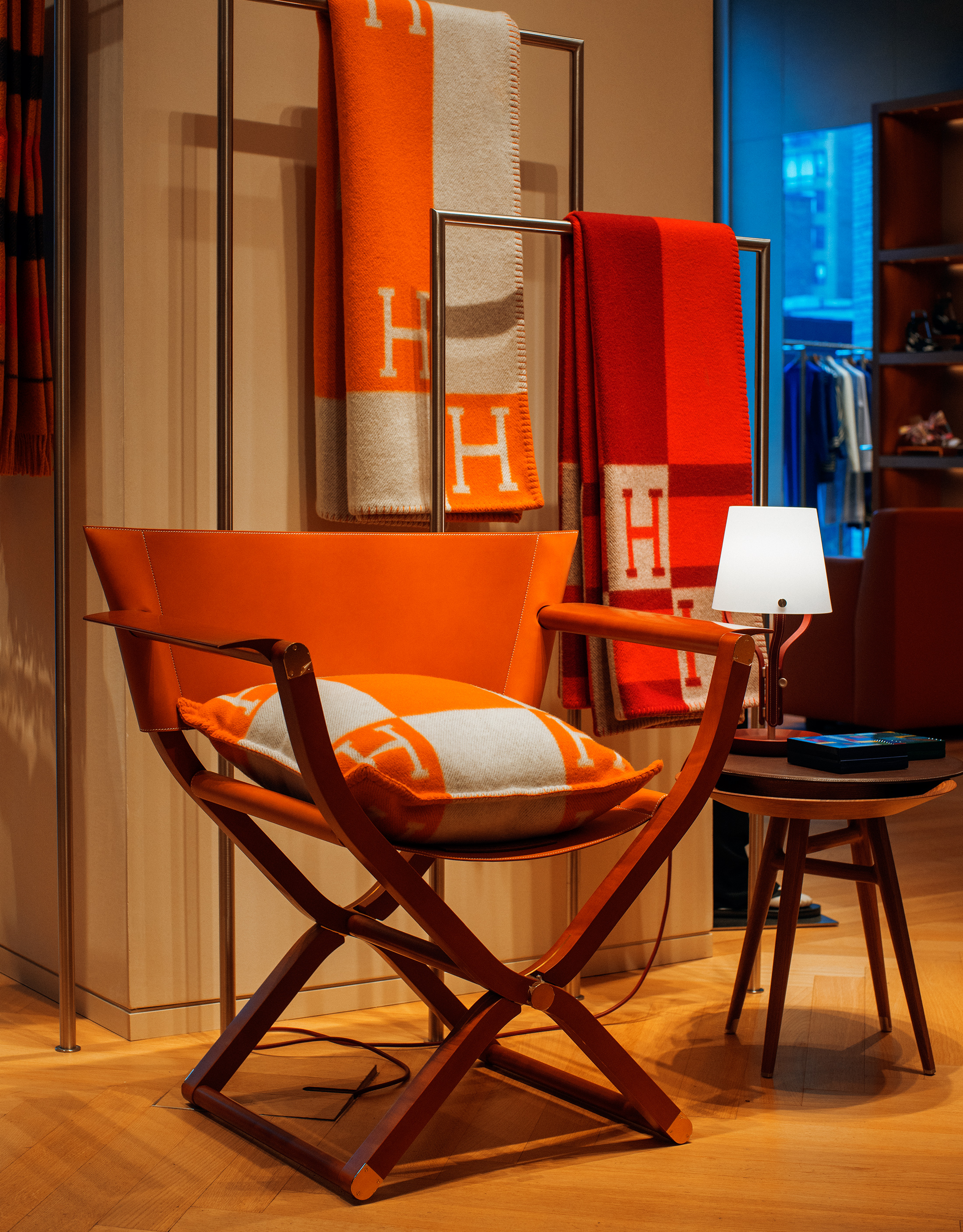 The main floor will include silks, leathers and an expanded watch and jewellery area with more gold offerings, such as the geometric loops that swing from Carter’s ears as she chats in her sleek Toronto boardroom. There will also be an area for makeup, coming in 2020.

About the second floor—which includes a private salon—Carter says, “The view is spectacular. You look straight out to the mountains and the water.”

“Our furniture will do extremely well,” Carter believes. “Vancouver residents have a great devotion to the art of living. A close friend who lives in the city also has a flat in Hong Kong that’s entirely furnished in Hermès.”

And, of course, the store includes an equestrian department. “After all, our first client was a horse,” Carter quips, referencing the firm’s founding as a saddle and harness maker in 1837.

Womenswear—designed by Nadège Vanhee-Cybulski—and menswear—by Véronique Nichanian—will be chosen (as it is for all Canadian Hermès locations), specifically with Vancouver’s climate in mind. Breezy double-faced cashmere toppers will be selected over the heavier, buttoned-to-the-chin styles that suit frigid Toronto. In accessories you won’t find much suede because of the abundance of rain.

Globally, Hermès is a rock star of the luxury world with 310 stores in more than 49 countries pulling in a net profit of €1.4 billion in 2018, up 15 per cent. With triple the space, the Vancouver expansion adds to the continued growth of Hermès’ presence in Canada. In late 2017, Toronto celebrated the opening of its bold new flagship with a party featuring a performance by Drake, an admitted Birkin collector. Montreal will double its selling space when it moves from Holt Renfrew into Ogilvy’s in 2020.

“In four years, not including e-commerce, we have tripled our retail footprint in Canada,” Carter notes. The Canadian arm of hermes.com is so busy, “it’s like a store in itself,” she adds.

Carter’s personal history with the brand dates back to childhood, when she recalls her father heading to Paris on a business trip. Her mother instructed him, “to get ‘one of those Hermès bags’ and not to go anywhere but the store in Paris,” Carter recalls. “So she knew, even in 1963, that there were knockoffs.” He came home with a Kelly bag in black crocodile—which made her mother “pretty happy.”

Decades later, Carter was carrying the family heirloom while at a board meeting in Paris. Jean-Louis Dumas, the company’s late chairman and artistic director, asked to see it.

“In those days each bag had a specific signature by the person who made it and he knew them all,” Carter says. “He took me upstairs to where the leather workroom was at the time and said, ‘This is the man who made your bag. He’s retiring next week and his son is taking over his position.’” Carter smiles. That’s a typical Hermès story.”