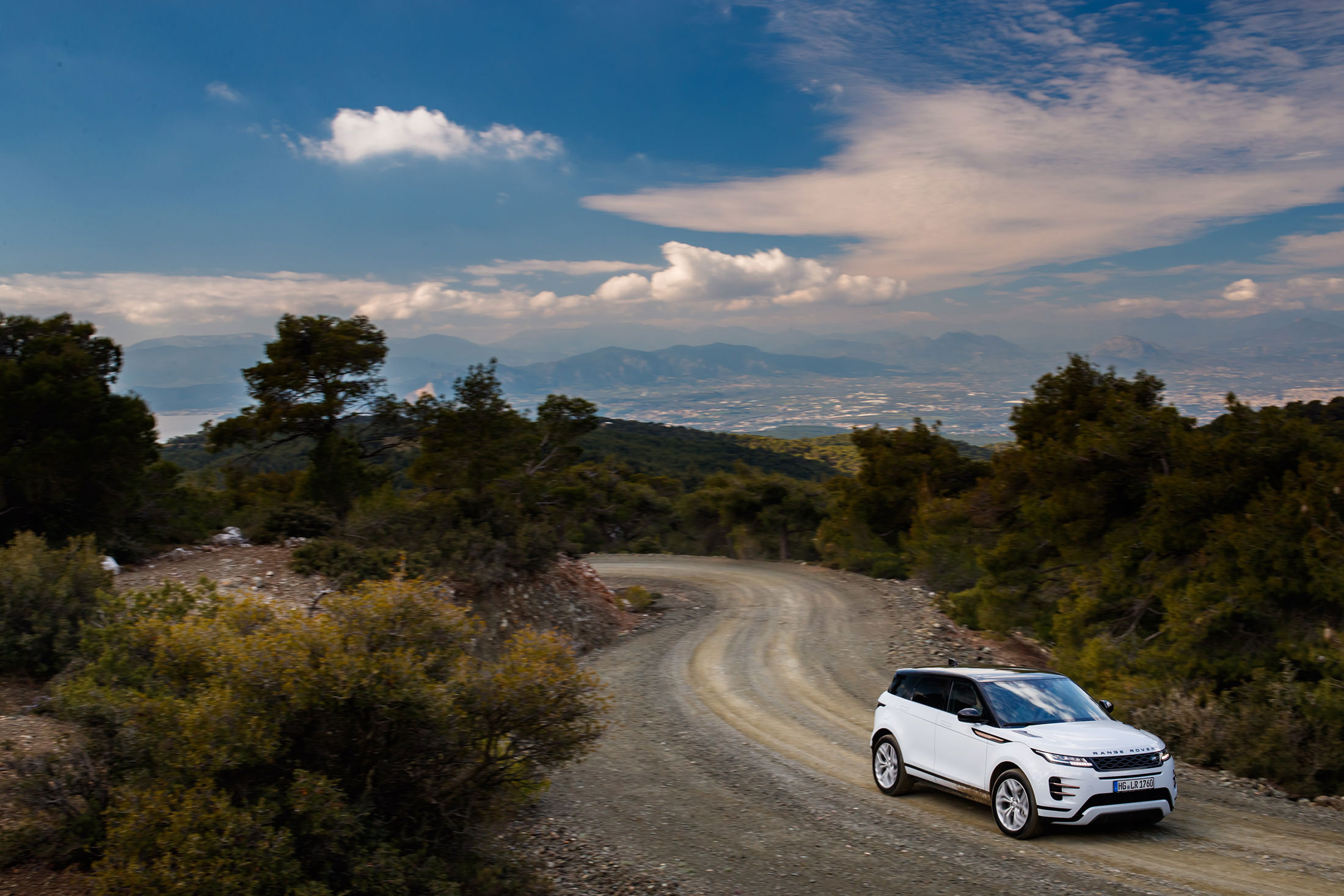 That’s all I can think as I guide the new Range Rover Evoque along a dirt track through the Parnonas Mountains, across the Saronic Gulf from Athens. On one side of the narrowing path, there’s a sheer cliff face. On the other, a precipitous drop.

The crests of the switchbacks are dotted with kandilakia, small roadside shrines that are common in southern Greece, erected in gratitude by the survivors of serious incidents—or in memoriam by loved ones left behind.

My eyes briefly catch a glimpse of one of these tributes before I quickly rip them away to look up another incline, scanning for the clearest path through the ruts, mud, and rushing flows of water from the first downpour the region has seen in weeks. I hear my passenger’s breaths quicken as the road ahead disappears into a thick fog. I force myself to climb on toward the road’s peak, where we can begin our descent back into the light.

This is all much harder work for me, I observe, than it is for the new Range Rover Evoque: this is precisely what it was built for.

The 2020 model year marks the start of the Evoque’s second generation, and those who drove the first iteration will be deeply impressed by the degree to which it has improved in both design and execution. Essentially, it now comes across much like the internationally-acclaimed Range Rover Velar, but in a size that feels right for Canadian urban and recreational living.

While a diesel engine is available overseas, it won’t be offered in North America. Here, the two highest-powered gasoline engine variations will be sold: 2.0-litre four-cylinder versions of Jaguar Land Rover’s Ingenium engine family fitted with a twin-scroll turbocharger.

These models didn’t feature a mild hybrid system that uses regenerative braking to deliver additional power on acceleration, though P300 models sold in Canada will have it equipped. All configurations do come with a nine-speed ZF automatic transmission and an all-wheel drive system that can rotate the front axle only for fuel savings on the highway, but gives a terrific push from behind up those muddy hillsides or traction at all four wheels for pulling through up to 60 centimetres of wading depth.

None of this capability is unusual from a Land Rover. Where the surprise factor lies is in the refined and serene interior. Premium leather is joined by sustainable offerings such as Kvadrat wool blend with Dinamica suedecloth—which reuses 53 plastic bottles in every vehicle where it’s selected—or a new textile made from eucalyptus. Plus, the sound-deadening progress that’s been made is truly remarkable. It’s worth noting that some slight flex could be heard in the panoramic sunroof during off-roading; the steel roof might be a better choice for those likely to play frequently in the dirt.

That group of enthusiasts will appreciate the available ClearSight Ground View feature, which projects an image onto the infotainment screen of the upcoming terrain as shown from just behind the front axle, allowing greater forward visibility. The infotainment system itself has been completely redesigned, and unlike some past iterations, it was eminently well-behaved during our Grecian drive. It now comes with both Android Auto and Apple CarPlay as standard equipment, a surprisingly unusual offering in luxury vehicles.

On the other hand, an equally surprising discovery comes with the vehicles destined for Canada sharing packaging with the United States: heated front seats, windscreen, washer jets, and steering wheel are all extra-cost options, which may leave Canadians feeling nickel-and-dimed.

Still, with the capability, refinement, high-end touches, and ease of use that are built into the new Evoque, all will likely be forgiven as it carries on seamlessly up a forested cottage driveway, splashing through washed-out creek beds, and kicking mud askance as it climbs unabated through hillsides.