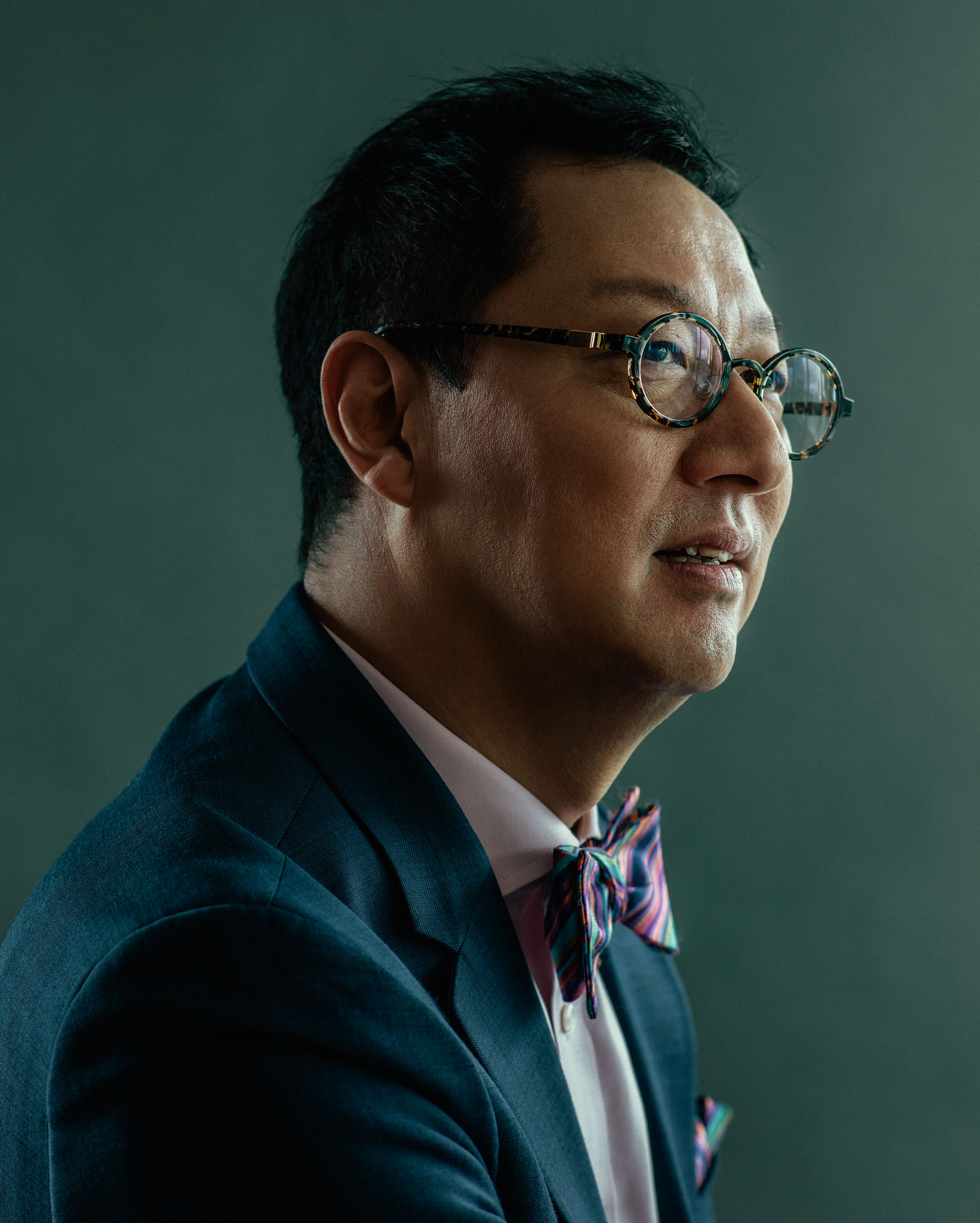 When the presidents of more than 45 universities around the world gathered for a summit at the Élysée Palace in Paris in July, one took a photo that stole the show at home, winning national media coverage. No surprise that it was Dr. Santa Ono, the bow-tie clad social media savvy president of the University of British Columbia, who tilted his phone and posed with French president Emmanuel Macron—also known to be fond of a good selfie.

When I meet UBC’s 15th president and vice-chancellor for an interview in his seventh-floor office (part of the Walter C. Koerner Library) he admits that social media is one of his favourite tools—and an occasional vice.

“It’s not very strategic, it’s just honestly who I am,” he says of his prolific social media output. “I have lots of friends that are university presidents, and I would say I’m a little bit out there in that there’s more spontaneity. I’ll say goofy things. It’s just because I want to be me.” He also cautions: “I probably spend too much time looking at YouTube and reading news on my phone.”

He understands the negative side of social media, having witnessed its impact on his two daughters, aged 15 and 21, and their friends.

“Social media is powerful, but it is also very destructive,” he says. “And I see it in the fact that a lot of kids aren’t happy with a photo of themselves. They have to fix it—they have to be perfect. That is something that wasn’t the case when I was a kid. I do worry about that expectation … because no one is perfect.”

While other university leaders confine themselves to sharing campus news or offering congratulations to new graduates or award-winners, Ono’s posts on Instagram are never filtered and his statements on Twitter are uniquely candid for someone in his position. He dipped a toe into U.S. politics in July after President Donald Trump said Baltimore residents were “living in hell”, tweeting that he was “proud to have lived and worked in the 7th district of Baltimore during my years on the faculty of the Johns Hopkins University.” When an alumna was imprisoned in Saudi Arabia, Ono made a decision (that was criticized by faculty and the student newspaper) to release a statement on his feed.

On the image-focused Instagram platform, he posts nearly National Geographic-worthy shots of bears bathing on Grouse Mountain and Vancouver architecture. Or, if he runs into a student’s father, he posts a selfie with him. “Jessye,” one such post reads. “Your Dad and I say hello from Seattle.’”

He cultivated this deeply personal style in his previous position as president of the University of Cincinnati, where he won a following among faculty and students largely through interactions on social media. A defining moment of his tenure came after the death by suicide of a student named Brogan Dulle, with Ono’s unexpected openness during a fundraising event held to honour the young man.

To the surprise of those in attendance, Ono revealed the mental health issues that had marked his own youth, including attempts—the first at age 14—to end his life. (He also shared these details on Twitter.) The fact that such an accomplished and well-liked leader was so open about his own struggles with mental health was applauded, and Ono was called courageous for his honesty and vulnerability. He insists his decision to share his troubled past was not about being brave, but about staying honest. “I don’t want to be just a figure or face,” he explains. “I’m comfortable with being just me. It’s a lot better to be yourself than to be some kind of creation.”

One of Ono’s former colleagues at Cincinnati, Beth Robinson, says his approach had an enormous impact on that university’s reputation. “Walking around with him was like walking down the street with a rock star. He really elevated the brand. Enrolment went through the roof.”

Santa Jeremy Ono grew up in a family of prodigies. His father, Takashi Ono, was one of the leading young mathematicians who were recruited from Japan by Robert Oppenheimer to become visiting scholars at Princeton following the dropping of the atomic bomb during the Second World War. From there he was offered a position at UBC and, in 1962, Takashi and Sachiko Ono welcomed their second child, Santa, when they lived on-campus in a house on a street called President’s Row. (Another prominent Japanese-Canadian, Joy Kogawa, the author of Obasan, was a neighbour.)

The youngest Ono brother, Ken, one of the world’s leading mathematicians, was known to be a prodigy at a young age. Eldest brother Momoro, a professor of music, played with the Baltimore Symphony Orchestra at the age of 14.

“Part of the problem when you’re young is that you don’t realize that life is a marathon, not a sprint,” Ono says. “My life until the age of 14 was dominated with feelings of inadequacy, that all kids must be like my brothers. ‘I am just so stupid’ and ‘I don’t belong in this world’—that was my psychology at the time.”

Hospitalized after a second suicide attempt in his late 20s, he was diagnosed with bipolar disorder. He credits medication and psychotherapy with his recovery, and he has been symptom-free
for decades.

His office at UBC is tidy and bright. The deep hues of a Persian rug match the mid-century modern furniture perfectly, and give a nod to Ono’s cultural interests. He has an appreciation for music and theatre of all types, but his real passion is for classical music; a cellist, he still finds time to play on the weekend. He and his wife, Wendy Yip, met while working as graduate students in the same research group at McGill University, but it was their shared love of classical music that brought them together.

“I liked that he had more dimensions to him than just science,” Yip says when I reach her on her cellphone as she runs errands on UBC’s Point Grey campus. “That thread of music has been running through our lives all along, and we still go to concerts together.”

Ono’s research focuses on macular degeneration—a leading cause of blindness. He was inducted by Johns Hopkins University into its Society of Scholars in 2015 and has held faculty positions at Harvard, University College London, and Emory University.

Still, he considers his position at UBC to be something of a dream job—he took a pay cut when he left Cincinnati to return to Vancouver, attracted by the institution’s prestige and potential. One of the younger universities to regularly make the top international rankings, UBC’s rise parallels the shift westward in a North American economy influenced by the growth of other Pacific Rim countries. “In 50 or 60 years,” he notes, “UBC has catapulted from being a very strong leading Canadian university to being one of the very best in the world.” He compares being a university president to conducting an orchestra—you get to stand at the front and wave your arms, but the resulting sound only works if you have the right ensemble.

In Canada, the University of Toronto is consistently ranked as the top research university, a measure that prioritizes the number of citations received by research journals where faculty publish. Ono considers this a narrow definition of success and sees a university’s mission more broadly, as “building a better world.”

To help deliver on his priorities, Ono has been making key hires within the senior administration, including numerous recruits from south of the border. He and his team have begun announcing original solutions to some of UBC’s closer-to-home issues, including a pilot project that offers rentals to staff capped at 30 per cent of household income, and a first-ever government business enterprise that will enable the university to borrow money to build badly needed student housing more quickly.

The year ahead will be critical to Ono’s legacy. If he is going to leave his stamp on the university and raise its profile at home and abroad, he will need to leverage the brand he has built into action. A key part of that will always be his presence on social media, he argues. It’s his way of staying connected, promoting mental health and well-being, knowing the community he serves, and getting the message out that success is bigger than an institution’s ranking.

“I actually think individuals and communities [can achieve much more] if they take the time to look after themselves individually, and if individuals in the community look after each other,” he says. “If you have a faculty member or student who is healthy, as defined in every sense of the word, they tend to perform at a higher level.”