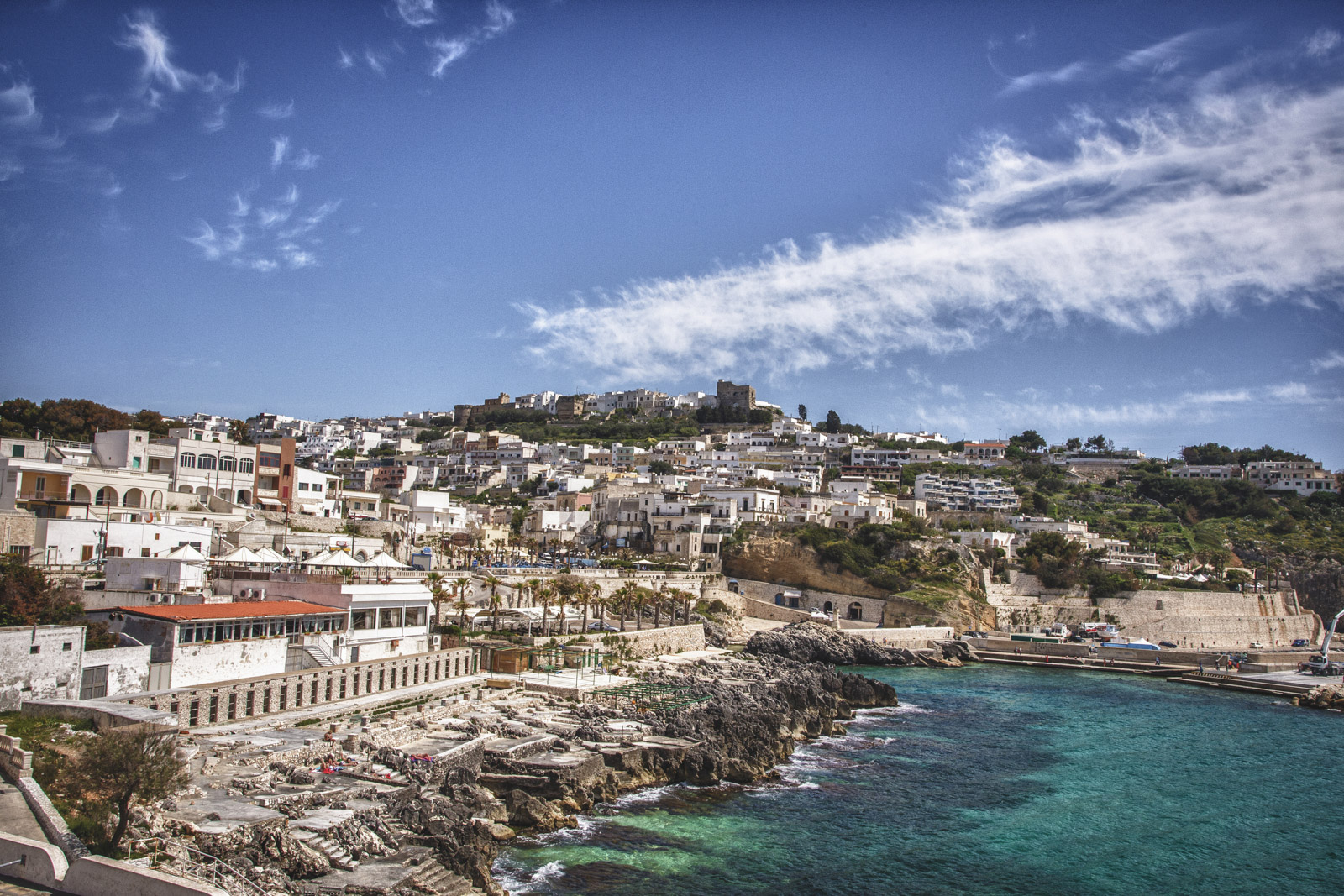 The woman, 60 years young, edged toward me through the water along the quayside of Castro Marina. Wearing a black bikini that showed off her deep tan, she carried a small knife that she occasionally stabbed into the quay’s stone wall.

I removed my feet from the water as she drew near. She opened her palm to reveal half a dozen tiny clams she’d pried from the wall.

“Try one,” she offered in Italian. I politely declined. “They’re worth €20 per kilo,” she insisted, as if their high cost would convince me to break my no raw seafood rule. “Are you scared?”

“Sí,” I responded. I figured she would respect my honesty if not my culinary courage. A trip to the hospital would be best avoided as this was November, and Italy was dealing with its horrific second wave of COVID-19. Despite the challenges, lockdown life in Castro was revealing the charms of small-town Southern Italian living. 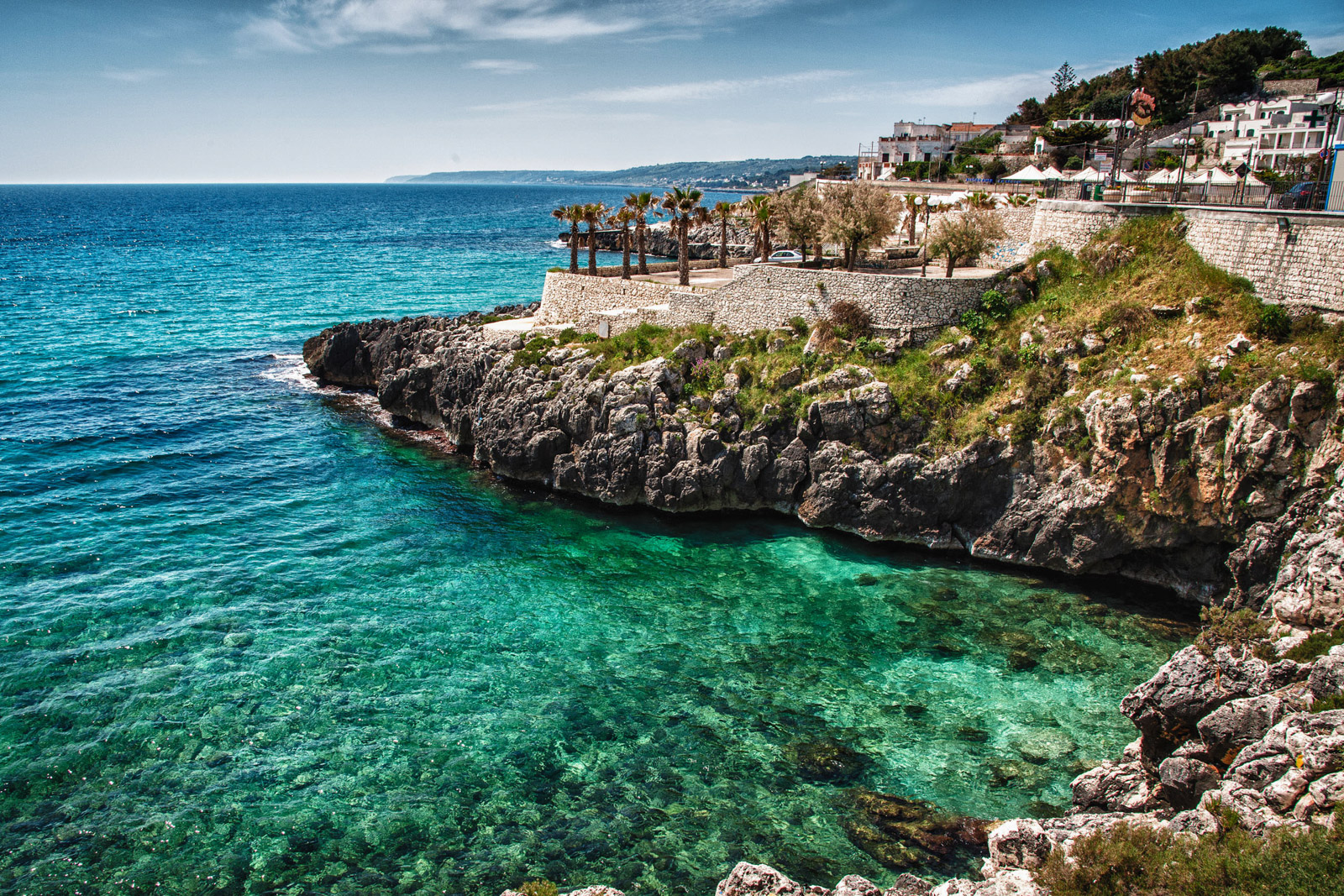 Castro calls itself the pearl of the Salento. In the small comune on the Adriatic coast, 50 kilometres south of the beautiful baroque city Lecce, Castro’s 2,400 residents are blessed with two towns in one: the upper town, with its 16th-century Aragonese castle, and Castro Marina, a fishing village with a rocky shoreline that wouldn’t be out of place on the Amalfi Coast. According to the Roman poet Virgil, it’s where Trojan hero Aeneas first landed in Italy. If it sounds like paradise on paper, the reality is no different.

We were here on a work trip; we operate tours in Puglia, the heel of the Italian boot. The COVID figures from Italy were so low in mid-September, we decided to see for ourselves how the country was recovering and plan for next year, but by the time we emerged from quarantine, the situation across the country had changed radically.

On November 6, Puglia was declared an orange zone. That meant all restaurants and coffee shops would close except for takeout, nightly curfew began at 10 p.m., and no one could leave their municipality without a good reason. We were stuck in Castro. 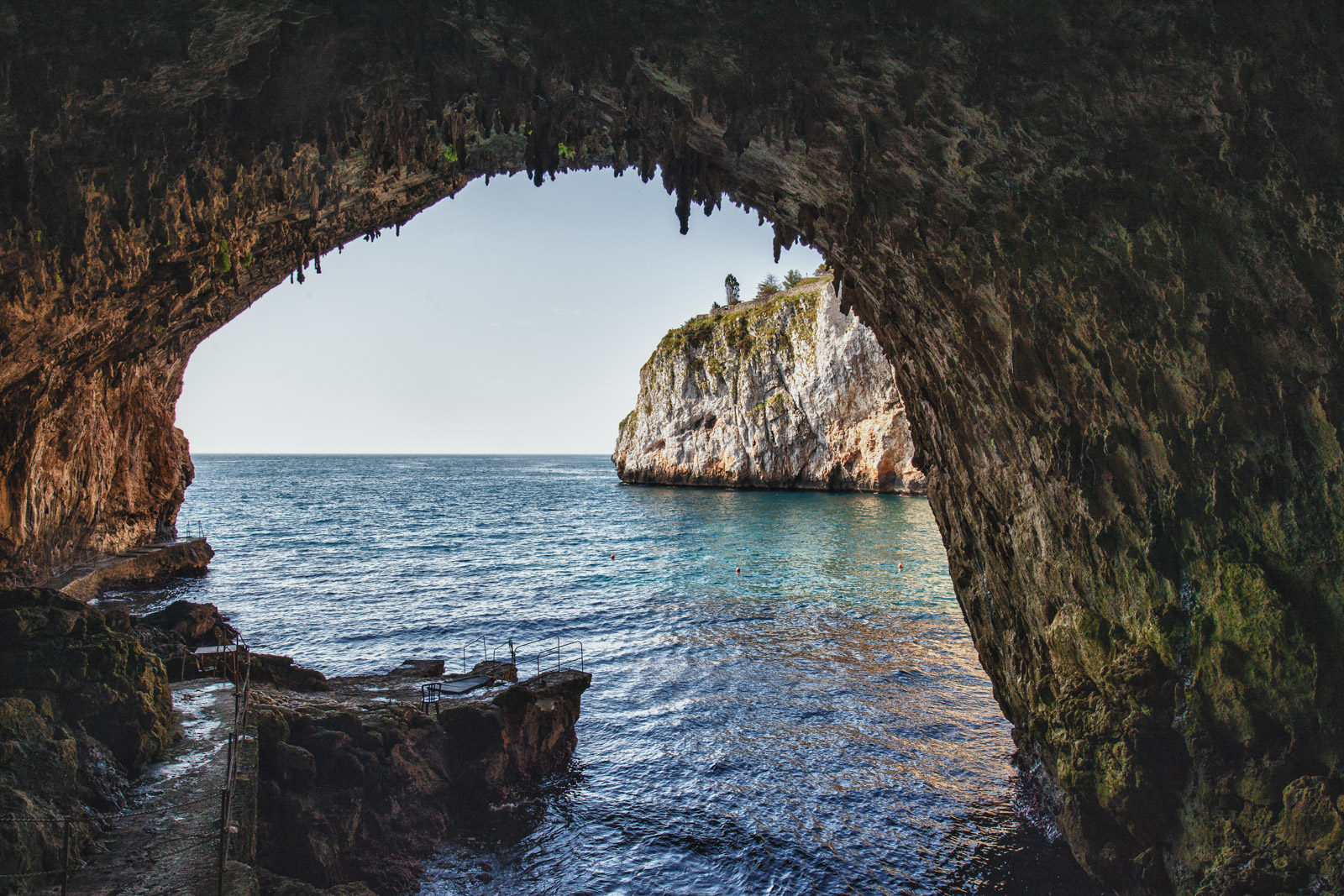 Within a couple of days, we had our lockdown morning routine perfected. It began with the short stroll along the seafront to Piazza Dante, the heart of Castro Marina. We bought our breakfast croissant (filled with pistachio or chocolate custard) or pasticciotto (the local custard-filled pastry) from our little town’s branch of Martinucci, a small chain of exquisite gelato and pastry shops. From our second visit, we were on first-name terms with Antonio and Cristina, two friendly staff members fascinated by a pair of out-of-season international visitors. “Where are you from? Why do you speak Italian? Can we visit you in Canada?”

Breakfast was enjoyed with feet dangling off the quay into the crystal clear Adriatic. The water was warm enough for a group of hardy swimmers to accumulate on sunny days. Socially distant conversation was mandatory, the locals taking particular interest in the two new residents. Pino sported a beach towel bearing the names of Canadian cities. It turned out he’d visited his family in Ottawa. “The food was terrible,” he sighed, “but it’s a beautiful country.”

You won’t find the Salento on maps of Italy. Although territorially similar to Provincia di Lecce, the Salento is a cultural rather than political region. The Salentini, a fiercely proud bunch, balk at describing themselves as Pugliese. They point to their unique cuisine (working magic with vegetables and seafood instead of the meat their ancestors were too poor to afford), dialect, and pizzica, their fast and fun folk music, to differentiate themselves from the rest of Puglia. But it’s the charming and cordial regional personality they radiate that sets them apart. 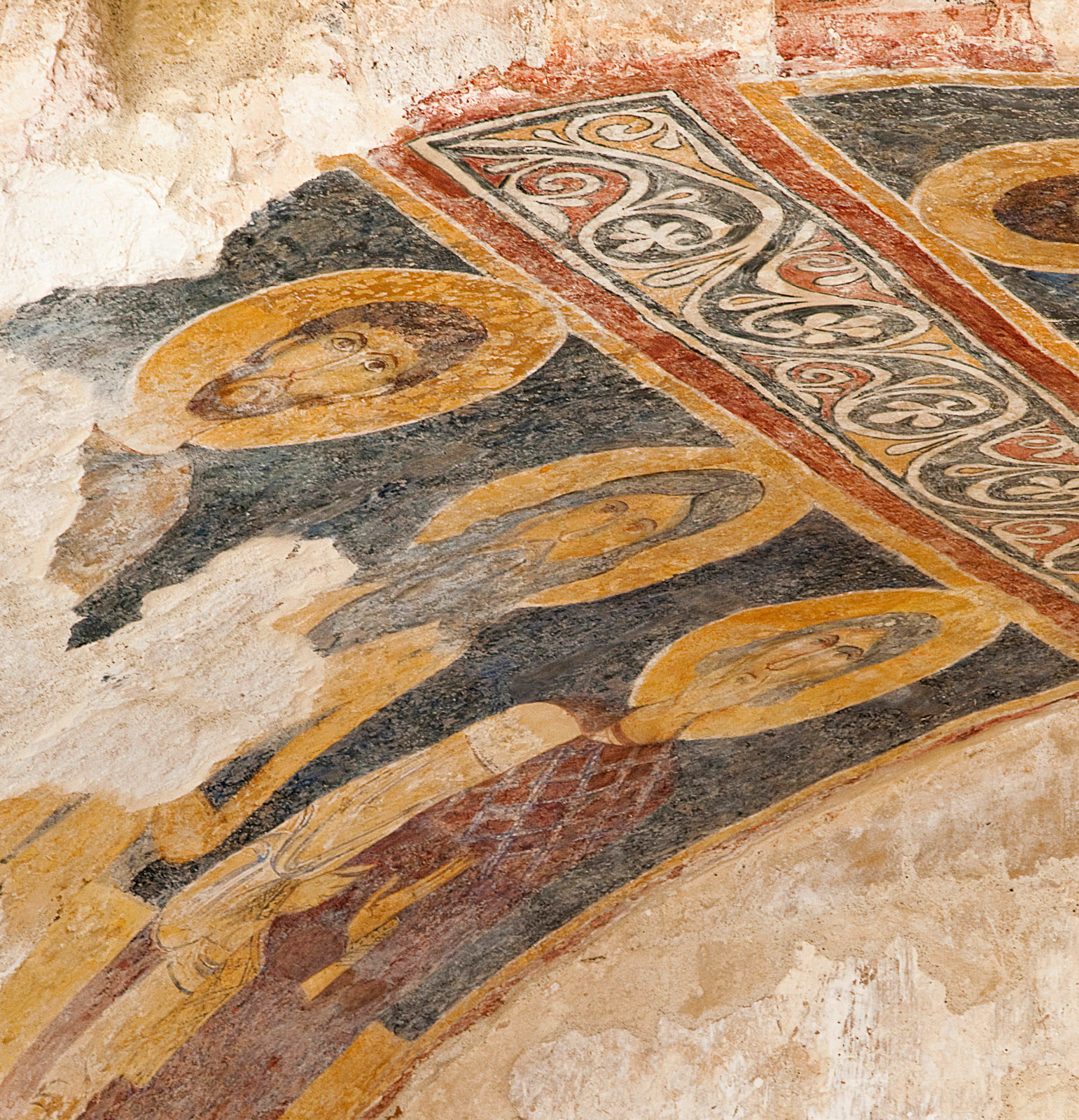 Vincenzo, the butcher in one of Castro’s two small supermarkets, seemed impressed that we knew enough about local cuisine to ask for 10 bombette, pork neck rolls filled with meat and cheese. He weighed our purchase, printed the price label, then threw in a free extra bombetta for good measure. It was the same story at MareVivo, one of the three fabulous fishmongers in town. We wanted half a dozen shrimp to accompany the two bream we’d purchased. Daniele grabbed 12 before declining to charge us (“who can be bothered to weigh a few prawns?”).

Our post-lunch excursions to the upper town were full of delights, the small centro storico blessed by the castle, two charming piazzas, a small church with ancient Byzantine frescos, and sea views in almost every direction. The oldest section of the town wall was built by the Messapians, early inhabitants of southern Puglia. Its colossal blocks provide a platform for the view across the Adriatic where, on sunny days, the mountains of Albania are clearly visible.

That stroll inevitably began or ended with a visit to Bacarro, the one coffee shop of the upper town open through the lockdown. It is run by married couple Andrea and Deborah, whose dedication to serving their community (making fresh gelato every Friday) was matched by their willingness to share their bounty. “You can’t enjoy hot chocolate without some snacks,” insisted Deborah one evening, packing up a handful of cookies, on the house. 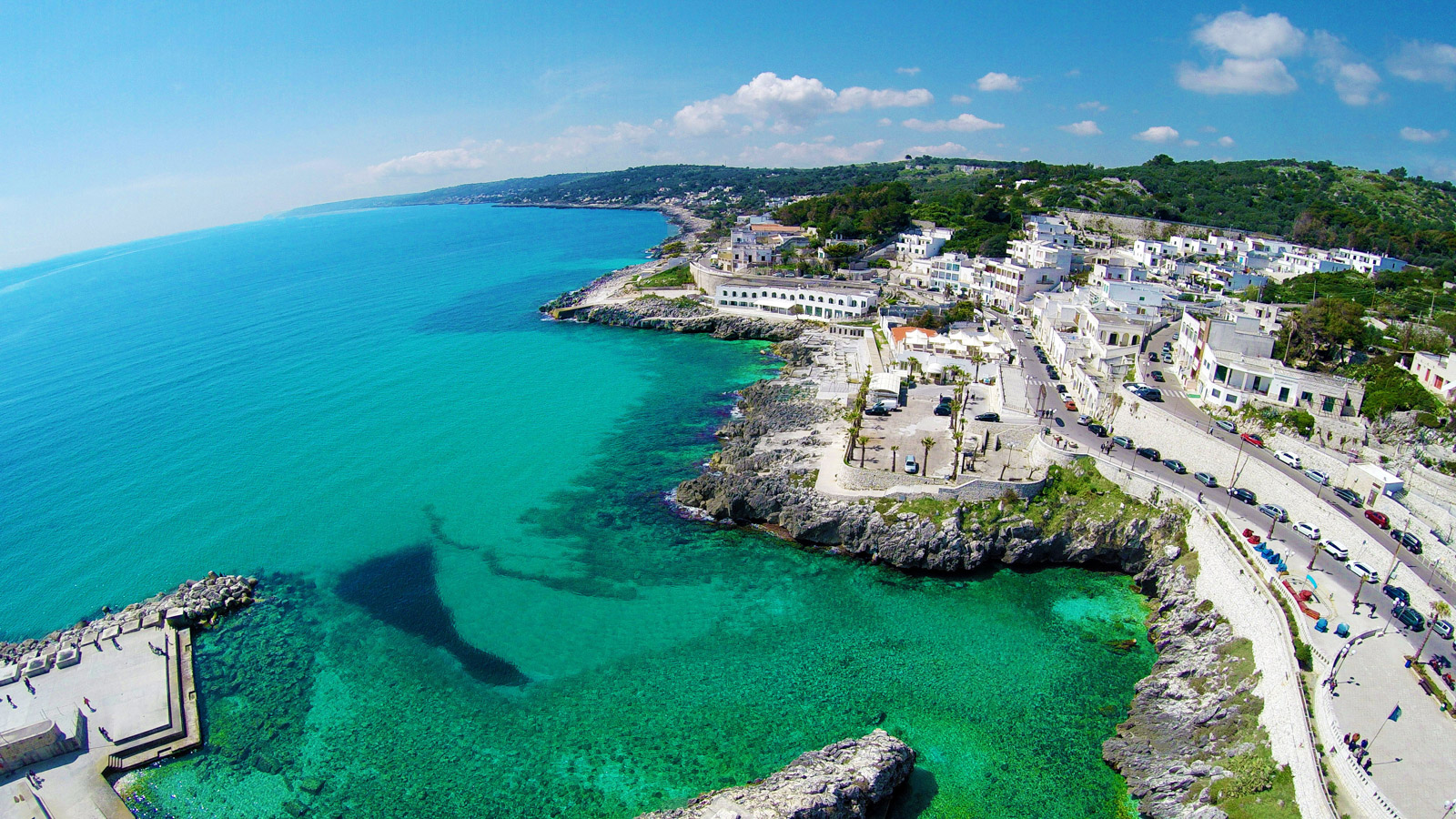 Castro, on the Adriatic Sea. Photo courtesy of ARET Pugliapromozione.

On December 6, Puglia’s COVID zone changed from orange to yellow, releasing us from our glorious confines in Castro. Yet, as wonderful as it was to re-embrace freedom, the memories of our month there inspire faith in the inevitability of Italy’s emotional and economic recovery.

Italy has been traumatized without a doubt, but in one corner of the Salento at least, the spirit of hospitality and an insistence that fun should never be considered an extravagance remain at the heart of a national rehabilitation.

This story is from our Spring 2021 issue. Read more Travel stories.