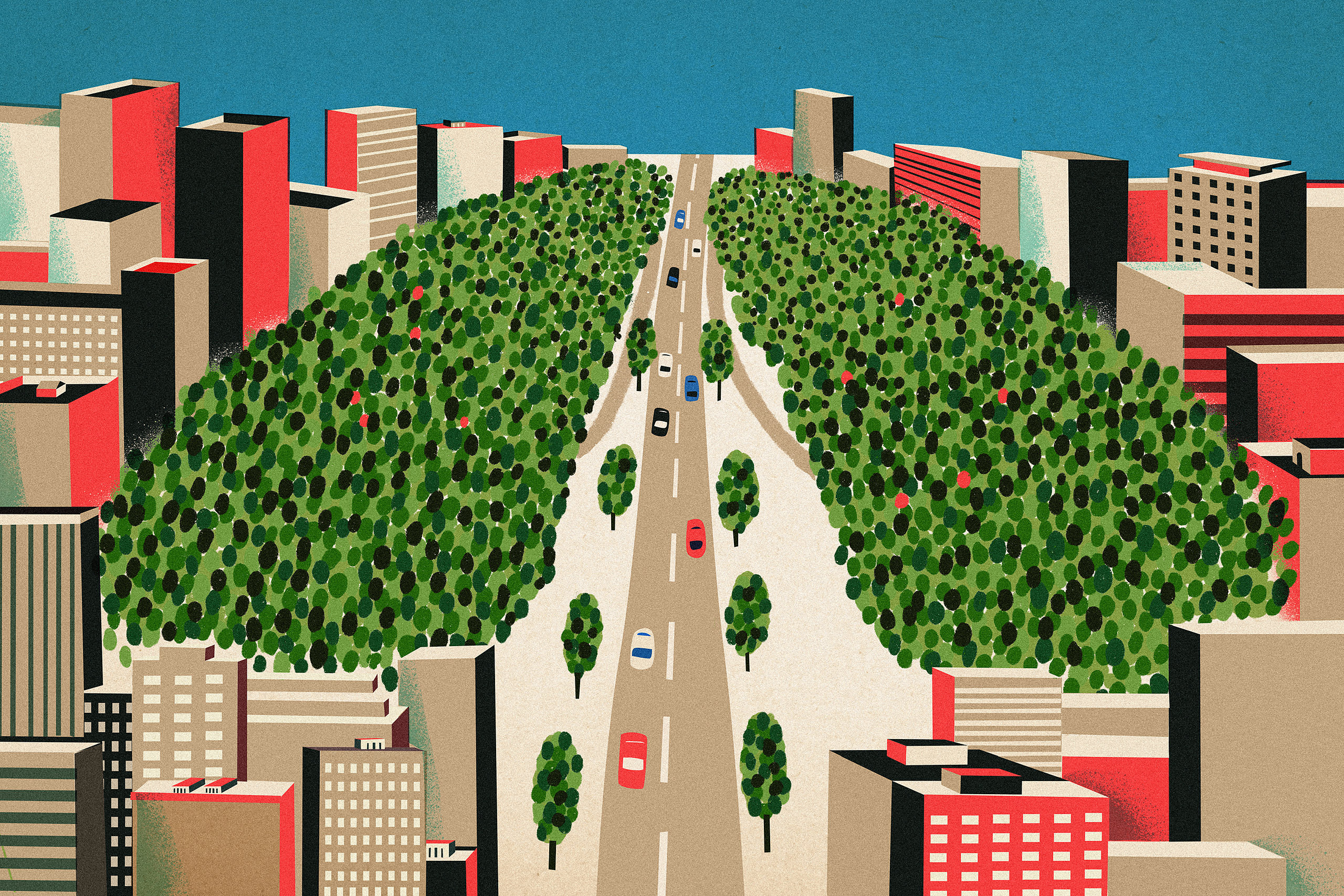 When you look closely at the leaves of a common catalpa tree, such as the one shading us under its massive canopy, you can see they’re “like tiny wind sails,” says Don Morrison, senior project manager of Urban Forestry at the Vancouver Board of Parks and Recreation. “And when you throw thousands of them onto a tree, it’s like a sailboat: as soon as you apply a certain amount of force, all of those leaves are going to start interacting with the roots, the stem of the tree, the different branches. In an urbanized area where you have the wind-tunnel effect, it’s like a perfect storm as soon as you have an intense-energy event.”

Morrison is explaining how technology helps his team monitor the trees on city property. Healthy trees are less likely to become uprooted or damaged by high winds. Near the catalpa is a five-month-old European beech, one of several replacement plantings for what he calls “failures” on the 1800 block of Nelson Street in the West End. “We preemptively removed a couple of trees at the beginning of this year,” he says. Supporting safe and healthy trees is one of a dozen principles, including using sound science, measuring progress, and mitigating and adapting to climate change—outlined in the City of Vancouver Urban Forest Strategy.

It starts with collecting data in the field: each year, staff hit the city streets with handheld GPS units to confirm tree species and other attributes. Back in the office, that information is processed using mapping software, checked for quality, and then added to the open-source database for analysis.

Vancouver has more than 151,000 public street trees (park trees and private trees are not included) in its dataset—numbers that are regularly refreshed—with coordinates and characteristics anyone can drill down into. For instance, it takes me a few clicks to discover there’s a single China fir in Vancouver holding court on a boulevard on the 3600 block of Angus Drive in Shaughnessy, while maple is the most populous genus, with more than 37,000 trees distributed among 31 species.

Research shows that big trees sequester more carbon. European beeches can grow more than 20 metres high, their canopies spreading as much as 18 metres. Right now, these youngsters on Nelson Street are small compared to their neighbours, some more than 100 years old, like the catalpas that grow to 18 metres (with blossoms that benefit pollinators) and katsura trees (sometimes called “caramel tree” for the fragrance emitted during leaf fall) that can reach some 30 metres.

Staring up at these beautiful behemoths, it’s easy to imagine the dangers of a windstorm, like the one that took down more than 10,000 trees in Stanley Park in December 2006, just a few blocks from where we’re standing. Centuries-old cedars and Douglas firs no longer stretched skyward, instead lying prone, roots wrested from the earth, their lifeline to food and water severed. Any nurse logs left behind still provide nutrients to the forest understory, but it’s devastating to lose the benefits of mature trees with large crowns.

Case in point: when those hundreds of tiny wind sails Morrison describes collectively form an armada, they provide shade and lower temperatures (Mother Nature’s AC), something crucial in urban areas where heat islands form as the surfaces of buildings, streets, and sidewalks amplify trapped heat.

Morrison believes we should think of urban trees as dynamic utilities, like street lights and sewers. “You install this light,” he says, drawing my attention to a column backdropped by a boxy building, “and it has a certain date that it’ll need to be replaced. Corrosion effects, updated technology, et cetera. It’s degrading on an annual temporal scale.” But a tree, he explains, does the opposite: it keeps growing and giving.

From 2010 to 2020, another 152,601 trees have been planted in Vancouver parks, along streets and by residents on private property. It’s not just a numbers game, though; planting the right tree is key. A monoculture can create vulnerabilities. Species diversity combines both richness (the number of different species in a given area) and evenness (how equally represented each species in an environment is).

Three species of elm across Eastern Canada have been largely destroyed by Dutch elm disease, while the emerald ash borer, an invasive beetle, has killed millions of trees in North America. In Vancouver, the Japanese beetle could explode in this region with climatic shifts. Some of the city’s maple species and its more than 29,000 flowering cherry, plum, peach, chokecherry, and apricot trees are among that voracious pest’s preferred hosts.

Trees can become stressed when exposed to heat and drought, which leaves them more susceptible to damage and disease. This is already apparent in Western red cedar and grand fir on the UBC Vancouver campus where some of the crowns of these conifers have turned orange.

Canopy coverage is another measure of an urban forest’s health. The Park Board uses remote sensing—aerial photography and light detection and ranging—to conduct landscape-scale analysis of urban tree canopies, says Reg Eddy, an arboriculture technician. “This type of analysis uses information about surface elevation and infrared radiation to make inferences of where tree canopies are.” Using specialized software, staff can then figure out the total estimated area covered by tree canopy. In the City of Vancouver, it’s 23 per cent: less than Toronto (40 per cent) and Seattle (30 per cent).

In a December 2020 update to its Urban Forest Strategy, the Park Board aims to increase the city’s urban canopy to 30 per cent by 2050. That work is already happening. I ask Morrison about the young maples lining Richards Street downtown, planted between the bike lane and sidewalk. “There are more rows of trees now than there are rows of cars,” he says, enthusing about how the streetscape might look in 20 years.

Richards Street (between Dunsmuir and Pacific) is one of the city’s three blue-green systems, which also include Alberta Street and Columbia Park and the St. George Rainway—park-like corridors designed to emulate how nature manages rainwater and land. More than 100 trees have been planted, estimated to sequester 1,900 kilos of carbon annually. Older maples have already transformed the sidewalks into a leafy tunnel. A Western red cedar stands tall and defiant in the middle of the sidewalk; the concrete curves around, accommodating its steadfastness. It may be a lone conifer in a crowd of deciduous trees, but it’s hardly an outlier: it is native to B.C. and has long been essential to Indigenous culture.

“A tree is not a forest. On its own, a tree cannot establish a consistent local climate. It is at the mercy of wind and weather,” retired forester Peter Wohlleben writes in his 2016 book The Hidden Life of Trees. He notes that together, trees create an ecosystem that moderates extreme temperatures, stores water, and generates a great deal of humidity. “Every tree, therefore, is valuable to the community and worth keeping around for as long as possible.”