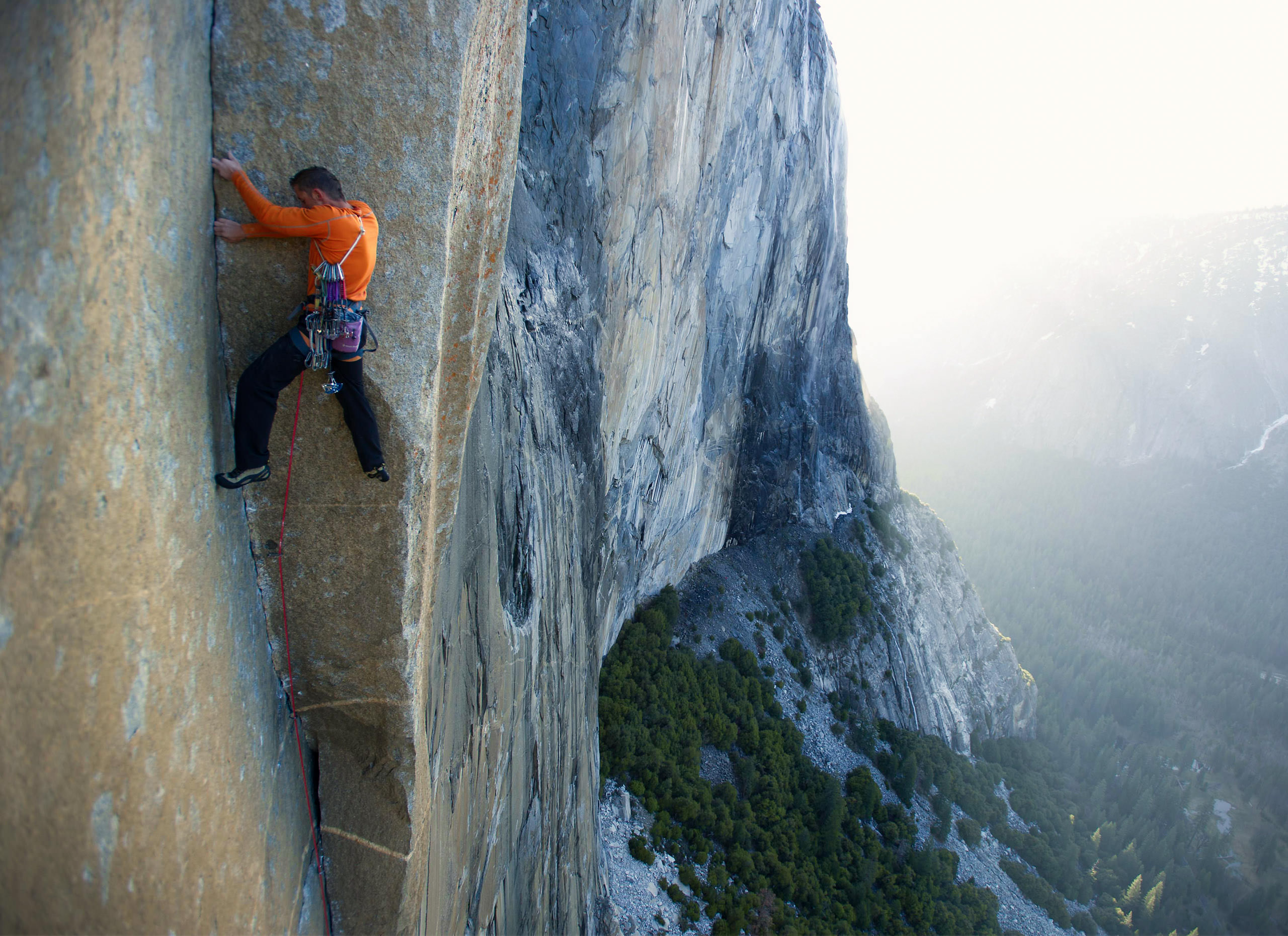 Tommy Caldwell does not look superhuman. Right now, in fact, he’s decidedly mortal: his left foot and lower leg are encased in a hard cast.

It’s the result of a torn Achilles tendon, after a “pretty standard” fall while rock climbing at Yosemite in California. Caldwell, considered one of the best-ever rock climbers, fell five metres, but this time, his leg hit the rock awkwardly. Recovery initially seemed swift. The 43-year-old was feeling good. Itching to climb again, he jerry-rigged some tacky rubber meant for climbing shoes on the sole of his orthopedic boot to get out on some rock but then reinjured the Achilles. Thus the cast. “I’m locked down, shackled,” he says.

For decades, rock climbing was an obscure sport, the domain of—this is meant mostly as a positive—dirtbags who dedicated their life to the pursuit. They were a sort of athletic-ascetic monk. Fast forward to the 2020s. Indoor climbing gyms have proliferated, and the sport made its Olympic debut last summer. “I was such a fan,” Caldwell says. “I was so excited climbing was in the Olympics.”

The soul of the sport remains rooted in the outdoor wilds—and its holiest site is Yosemite’s El Capitan, a granite monolith that soars 900 metres from the valley floor. Over the years, Caldwell has forged more than a dozen new climbing routes on El Cap. In early 2015, after a half-decade of scouting, planning, and training, he and Kevin Jorgeson completed the first free-climbing ascent of El Cap’s Dawn Wall, previously regarded as unclimbable. The granite of the Dawn Wall is, in the most difficult sections, almost paper smooth. Holds for the edges of fingers and toes require a microscope to spot, never mind grip. It took 19 days. The feat was a media sensation and later a documentary.

Caldwell grew up in an outdoorsy family in Colorado. In 1995, at just 16, he won a pro climbing competition as an amateur. Five years later, he was on his first big sponsored climbing trip in Kyrgyzstan, where a rebel militia from neighbouring Uzbekistan took him and his partners hostage for six days. They were caught in firefights and teetered on the edge of hypothermia and starvation. Escape came when, under the guard of only one man, Caldwell pushed his captor off a cliff. (It later emerged the man lived.) Back in the United States, there was a crush of media attention.

Not long after, Caldwell cut off part of his left index finger working with a table saw. His climbing career looked finished. Instead, he started to train with a maniacal focus. He returned to El Cap six months later and finished a climb that had previously bedevilled him. “It was like that experience in Kyrgyzstan had totally reset my bar for things like pain and fear,” he recalled in a 2017 National Geographic talk.

This spring, sitting on a climbing mat under the bouldering wall at Mountain Equipment Company in Vancouver, the morning after a sold-out talk hosted by the store, his left ankle in the hard cast, Caldwell says, in the most plain-stated way, “I kind of need pain in my life.” Then comes the question why. He pauses and says, with a half-smile, “I’m not sure if it’s a dysfunctionality or it’s a good thing.” He likens his inner drive to the essence of climbing. “It’s an inherently stressful activity that forces you to become bigger and better than you would be without that in your life.”

Caldwell’s main sponsor is Patagonia, the outdoor apparel company that started as a climbing-equipment maker. The company has long fought for environmental causes. When Caldwell was younger, he wasn’t especially political, but over time he has worked to protect wilderness. It was still a little myopic—lobbying to protect great spots to climb.

His advocacy has expanded. His title at Patagonia—he chuckles at this—is global sport activist. He wears a semi-tattered black T-shirt that reads: “Defend the Sacred, Protect the Arctic Refuge.” It was a big win that he was part of. The Trump administration opened up oil drilling in the Alaskan refuge, but a concerted push, including an aim at Wall Street banks to hold back financing, led to the suspension of drilling leases by the Biden government. 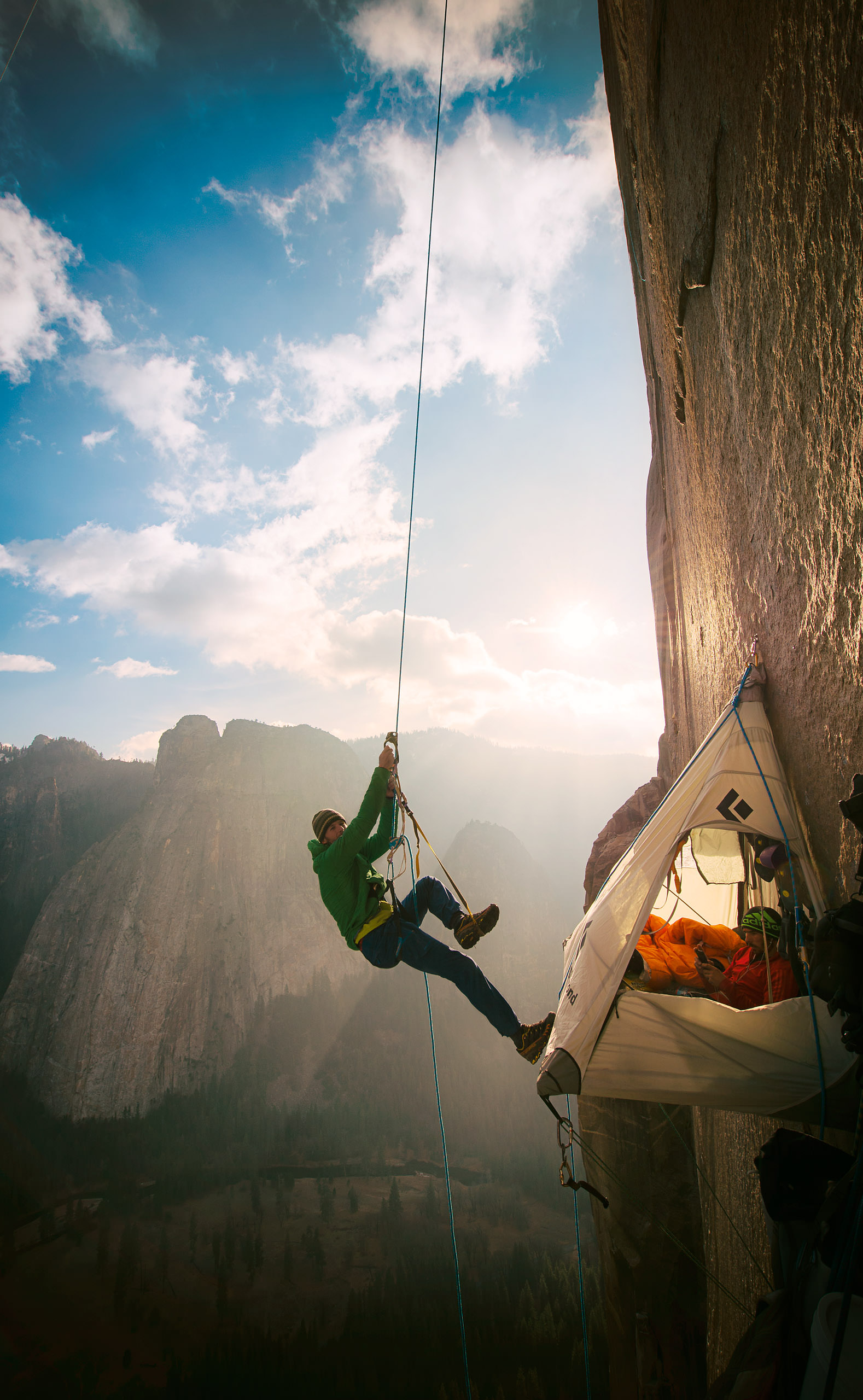 Tommy Caldwell climbs the Dawn Wall in Yosemite, a challenge that took 19 days.

Now that he’s in his forties, Caldwell’s prime, like any elite athlete, is behind him. He still ranks among the best of the best in climbing, but there’s a shift in focus. “My life has been so centred around being this physical athlete,” he notes.

He’s written a memoir, 2017’s The Push. He wants to do more policy work. His Vancouver visit was to promote the climbing-equipment maker Edelrid, which, like Patagonia, focuses on sustainability. He wants to keep using his profile in climbing to bring wider attention to places under threat. One idea in the works is a trip to the Tongass National Forest in Alaska, home to the Devils Thumb, a famous and dangerous spire on top of a glacier bordered by a rainforest. It is remote. “One of the coolest places, anywhere,” Caldwell says. A lot of the old growth has been logged, and the Biden administration is moving to institute new protections. Caldwell talks of stoking wider awareness: “Most people don’t know what the Tongass is.”

He is no stranger to the vicissitudes of politics. He was part of the effort to turn the Bears Ears buttes in Utah into a national monument during the Obama years. In a different sort of lobbying, Caldwell climbed with Sally Jewell, Obama’s Secretary of the Interior. Trump slashed the protected area, and Biden, after more activism, reinstated the boundaries. Politics, in a way, is a climb that never ends. “That’s one thing I’ve realized about environmental issues,” he says. “You have to fight them forever.”

From his home northwest of Denver, he can see the peaks of Rocky Mountain National Park. In an idea he cooked up with an old friend, Adam Stack, the plan was to, as fast as possible, traverse 56 kilometres and climb 17 peaks. Stack ended up dropping out, and Alex Honnold took his place—Honnold being one of Caldwell’s closet friends and climbing partners, and the star of the Oscar-winning documentary Free Solo.

A new short film, Cuddle, tells the story. Part of the plan goes awry, and in the night, the temperature dipping below zero, the pair navigate the difficult terrain by the light of their iPhones. Honnold at a low moment encapsulates how they’re feeling: “Terrible.” Of course, they power through, but as day breaks Caldwell is exhausted and vomits. He rallies, and they finish in 36 hours. It was yet another first.

Caldwell is married, with two children. He faced death half a lifetime ago in Kyrgyzstan. And while precautions are always taken, and safety and preparation underpin all climbing projects—and in the realm of extreme sports, Caldwell isn’t a noted risk taker—there is a stoicism around risk.

“I do understand, at some level, it could all go south for me,” he says. “I guess that’s just something I’ve learned to accept, which is really hard with a family. There has to be a little bit of a cognitive dissonance at times with these big expeditions.”

He may not look superhuman—he’s 5 foot 9 and 150 pounds—but such expeditions, from El Cap to the Rocky Mountains, are well beyond the reach of most mortals. Asked if his hands are particularly suited to climbing, he says they are actually smaller than most. He figures it’s helped him avoid finger injuries such as strained and ripped tendons common in climbing. He admits he’s not particularly muscular and jokes that “my forearms are tiny.” He credits technique, training, and while he doesn’t use the word, a superhuman endurance.

“My advantage in life is my willingness to suffer,” Caldwell says. “I find joy in the ability to endure.”