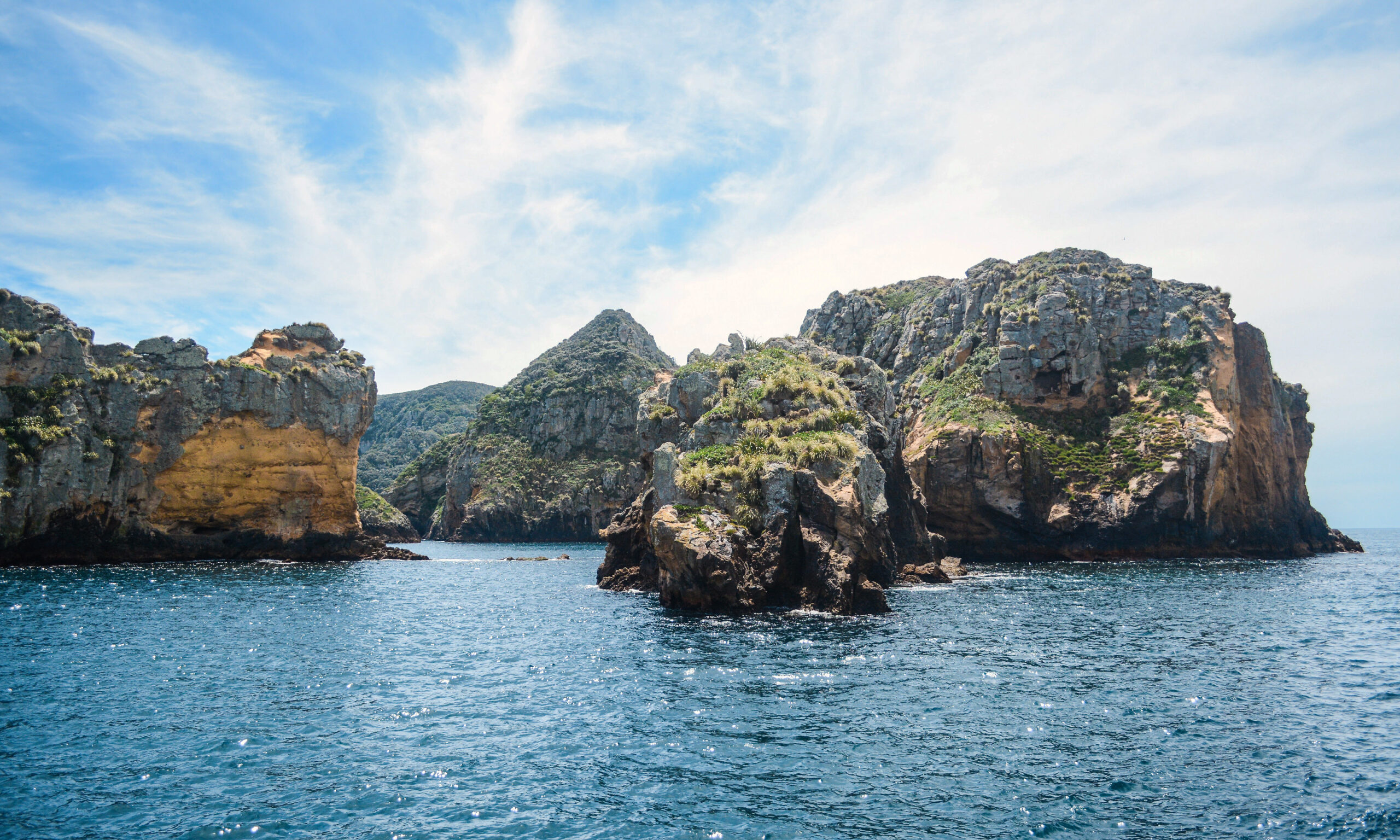 The Poor Knight Islands are a marine and nature reserve, considered one of the top 10 diving spots on Earth.

I take a breath and immerse myself in cerulean waves, adjusting my snorkel as shoals of tiny blue maomao scatter. The outline of a stingray disappears into a tangle of kelp while multicoloured fish eyeball me from schools both large and small. When I spot two fat eels waving their way toward a cliff jutting deep into the dark waters, I come up for air.

These are the Poor Knights Islands, a grouping off the east coast of New Zealand’s North Island. I’m scanning the shore for giant snails and tuatara, reptiles said to resemble miniature dragons, but am rewarded with just a flock of rako (a burrow-nesting seabird), so I head back underwater into the briny world Jacques Cousteau declared one of the top 10 diving spots on Earth.

To get here, I took a boat tour from the laid-back beach town of Tutukaka. The hour-long tour, operated by Dive! Tutukaka, sees dolphins jump alongside our boat, and clouds of translucent bottle-cap-sized jellyfish swell beneath us. To call the journey scenic would be an understatement; the same goes for our destination.

Until 200 years ago, the Poor Knights Islands were home to around 400 Māori, who left after an attack by another group. Today, these ancient volcanic domes are a designated marine and nature reserve that cannot be walked upon. Adventurous visitors may explore inside, though—the world’s largest sea cave, Rikoriko, exists here, with a narrow entranceway that belies its true size. Our vessel is dwarfed by darkness as we glide within. My eyes adjust to see rock walls rising 35 metres above my head, illuminated by thin threads of sunlight. (Indeed, the cave’s name means “shimmering sunlight” in Māori.) Divers often comment on the cave’s stark, moon-like appearance underwater, but it is also home to marine life such as fire slugs (Janolus ignus), brilliant corals, and stingrays.

All is quiet. Until, quite suddenly, it isn’t. An aria cuts through the air.

At first, I think someone has turned on music, but then I spot a woman belting over the starboard side: an opera singer. Her voice echoes hypnotically through our rocky amphitheatre. I can’t help but think this is a bucket-list moment I never knew existed. Perhaps, hundreds of years ago, these islands’ early residents would sing in the cave, too.

In Māori culture, there is a belief that the land (whenua) is made up of the ancestors, and therefore must be respected. Travellers to these beautiful lands must do the same. Here in Northland, I am reminded each step of the way. Northland makes up five per cent of the country and has two distinct coastlines to explore: the beach-lined west coast, on the Tasman Sea, and the more rugged east coast, on the Pacific Ocean. There are subtropical secret beaches, green swaths of rolling farmland, and rare kauri forests.

More significantly, Northland holds special importance in Māori culture. It is where the first Polynesian explorer, Kupe, arrived about 1,000 years ago, navigating by the stars and ocean currents of the South Pacific. It’s where he first set eyes upon “the land of the long white cloud,” Aotearoa, the Māori word for New Zealand. And it is where the first European settlements arose in the stunning Bay of Islands, a group of 144 isles on the east coast.

Just over an hour’s drive north of Tutukaka, I find myself island-hopping over turquoise waters on a private boat skippered by Brett Michalick, who explains how many of these scenic isles were once used for grazing but have since been replanted with indigenous plants such as manuka brush and cabbage trees. Some are protected sites, hiding shell middens and carved fishing hooks deep in their soil from early generations of Māori. 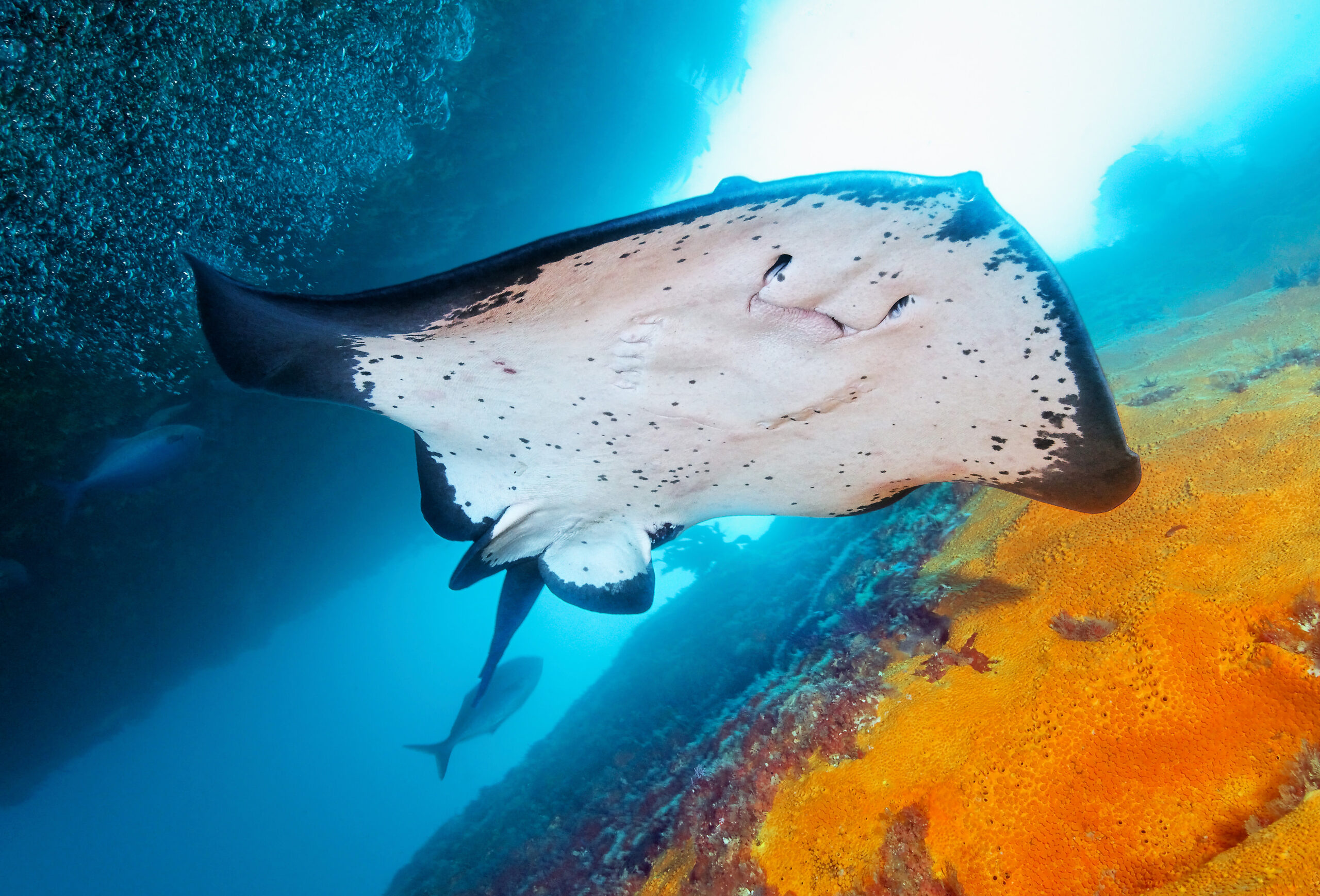 The short-tailed stingray is one of the many fish species found in the Poor Knight Islands.

Michalick works for the Landing, the boutique lodges and winery where we are headed, itself built upon a peninsula of importance: it used to be the Māori village of Te Puna, once described as the capital of the country. In 1814, a neighbouring beach was also the site of the first European settlement of New Zealand. The 1,000-acre heritage property was farmland before it was purchased two decades ago by California-based New Zealander Peter Cooper, who developed it with the blessing of the local iwi (Māori tribes). The largest private collection of Māori artifacts outside of museums in the country is displayed on the property, mainly in the Cooper Residence.

The Coopers planted more than one million native plants on the grounds, and the 23-acre vineyard with grapes destined to be pressed, fermented, and barrel-aged on-site. The Landing turns out nearly 50,000 bottles of wine annually from the clay and sandstone soil. “The first vines were planted in 2007,” Michalick says, sweeping his hand over the undulating hills. “It’s a natural amphitheatre, positioned toward the sun, so they do really well.”

The next day I sit on a wooden bench in a traditional carved Māori meeting house at the Waitangi Treaty Grounds. Here, the eponymous founding document was signed by the British Crown and 540 Māori rangatira (chiefs), making New Zealand a British colony on February 6, 1840. Complex and contentious, the Treaty of Waitangi—and the inequalities surrounding its signing—continues to spark debate today throughout the country. In a modern context, there is much work left to be done.

“The treaty hasn’t quite lived up to its intended purposes,” explains Mori Rapana, the site’s cultural manager. “So in my opinion, for Māori people, Treaty of Waitangi has never been a celebration, primarily because there is unfinished business that has yet to be completed. Until things are in place for Māori, as per the virtues of the treaty, they will always only be a commemoration.”

Visiting the grounds is an immersion in custom and culture, and it is operated with heart. There are two state-of-the-art museums, in-depth tours, traditional Māori performances, and even a 37.5-metre waka (traditional wooden boat) on display. In a nod to oral history, many of the guides are descendants of signatories of the treaty in 1840, telling stories passed down through generations.

As I wander through its coastal grounds, Waitangi’s physical beauty and palpable history make one thing clear: it is an immense privilege to be a visitor on this land. “We Māori have an intimate connection with Papa, the Earth Mother,” Rapana says. “Not just here on Waitangi, but every piece of whenua [earth] that we live on, graze on, garden on. We say that we belong to the earth, not the earth belongs to us.

“We’ve got a saying in Māori—Toitū he kāinga, whatu ngarongaro he tangata—which means: Man will move on, but the land will always remain.”