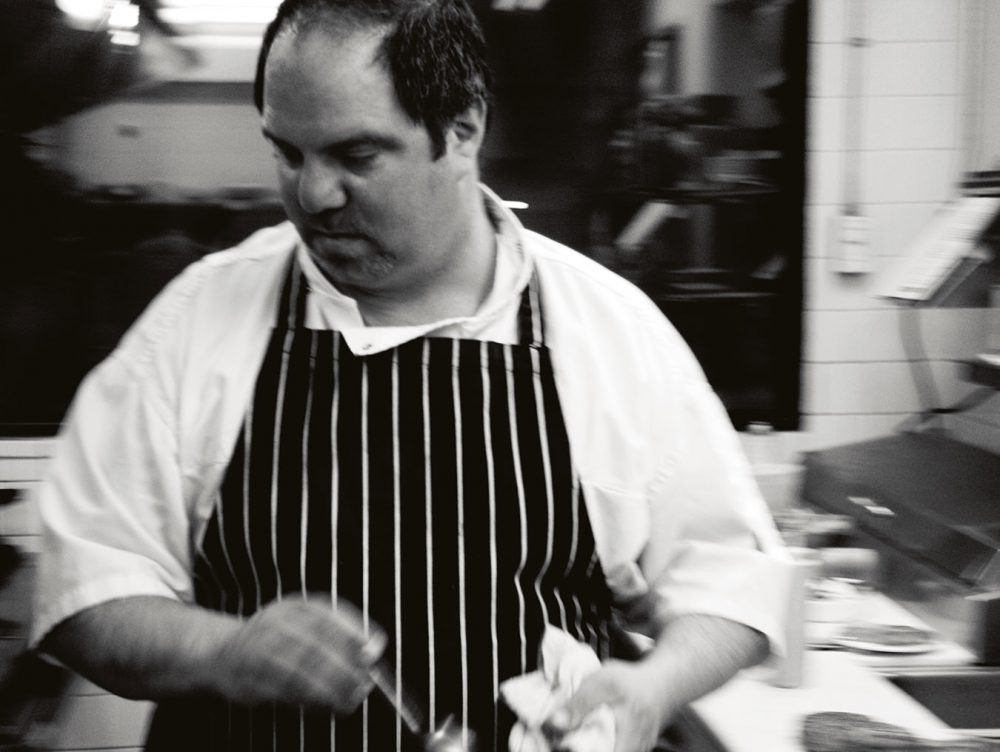 “Dining is all about context,” says Andrey Durbach as he takes a sip of his espresso. He leans back in his chair and ponders for a moment. “The key for both restaurateurs and diners is to distinguish between quality and mediocrity and garbage. It’s all a spot-the-difference game.” Indeed, Durbach is a chef/restaurateur who takes pride in both his cooking skills and his business acumen. “I’m very interested in developing in my craft, of course, but I’m also keen on tracking the dealings and the vicissitudes of the marketplace. I’d like to express myself in a culinary fashion while making an economic mark as well.”

A Vancouver native, Durbach cut his teeth in kitchens such as Bishop’s, Il Giardino and Café de Paris before embarking upon studies at the Culinary Institute of America in New York, graduating at the top of his class. He launched Étoile in 1996, his first solo Vancouver endeavour. Though Durbach’s cooking was top drawer and garnered rave critical reviews (including a nod from Gourmet magazine as one of the city’s finest restaurants), he nonetheless found himself stuck in a rut. “It was my first real insight into what successful restaurants were all about. I loved the food I was doing but I couldn’t make enough money to realize my ambitions, like running very hard to stand still. As a chef/owner, I didn’t have the gravitas to pull it off.” Wisely, he sold Étoile after three years, making enough money to settle his debts then pulling up stakes and decamping with his wife to clear his head, first to Southeast Asia and then to England.

Buoyed by a renewed perspective, Durbach returned to Vancouver nearly two years later and put down roots. Short-lived stints at the helm of two other restaurant kitchens preceded the opening of Parkside in 2003 with partner Chris Stewart. Their elegant West End hideaway was a sophisticated backdrop for Durbach’s contemporary West Coast meets Anglo-French cuisine. Ever ambitious, Durbach and Stewart concurrently stickhandled two new restaurant openings: La Buca in the West Side in December 2006 and Pied-à-Terre on Cambie Street in November 2007, both intimate neighbourhood rooms. But time and tide brought a significant downturn in the economy, and the partners revised Parkside’s identity to accommodate diners’ tighter purse strings. They rebranded it as L’Altro Buca and offered a more open, accessible menu concept before bidding adieu to the space altogether in late spring 2010 and shifting their attention to Cafeteria. The newest jewel in the Durbach/Stewart triple crown, it has an ever-changing menu that is a whimsical mix of international dishes with each item priced below the $20 mark.

“Great restaurants are convivial places, little sanctuaries of enjoyment, not places of evaluation,” he affirms. Durbach assiduously strives to surpass acquisitional dining, or what he dubs “culinary trainspotting”: eating for the sake of adding one more restaurant notch to the foodie bedpost. “My kind of diner is one who loves unctuous, delicious food, and is willing to chance the unfamiliar. It’s a diner who knows and trusts the kitchen and the servers, a person who wholeheartedly invests in the visceral experience of a meal. This is what I’m after.”

At the core of Durbach’s culinary motivation is a no-nonsense focus on straightforward food. Whether Italian trattoria, French bistro or casual culinary freestyling, his cooking is hearty and soulful across the board, utterly without pretense. “We don’t make powders or bubbles or fruit caviar. We can do all this, but we just don’t. I believe in distilling a food experience to its essence where you don’t have to pick it apart.” Durbach’s panoply of luxurious plates belies his penchant for bold, classic flavours—among them ragu of lamb cheeks with handmade ricotta and green pea agnolotti, roast loin and parmentier of red deer in a port wine sauce, Korean-style bison shortribs with kimchi and shiitake rice—all comforting and deeply satisfying. “One of my favourite things to do in the kitchen is to braise meat,” he muses. “A long, slow simmer is perfect for cooking goofy cuts of meat and making something wonderful from a piece of game that most restaurants tend to shy away from.”

Durbach’s years in the restaurant industry have honed his focus, enabling him to discern the difference between cooking intuitively versus fulfilling the philosophy of the moment. “This is the unique and singular path along which we’re going to drive ourselves,” he affirms. “We try to take a bit of a longer view beyond what happens to be trendy right now. We have our detractors, but not many.” And the next step in the road? Durbach and Stewart’s current formula of smaller-scale rooms serving uncomplicated, smartly priced dishes has overcome the spectre of today’s challenging economic climate and the sobering effects of the HST. “At the moment, Chris and I are pretty focused on making sure that our restaurants have got bums in seats. Any notions we have of embarking on something too experimental will have to wait until the opportunity and the market are exactly right.” His eyes light up with a twinkle. “I’m a total sucker for the restaurant industry, though—I love the buzz of opening new places. I think there’s a couple more in us yet.”