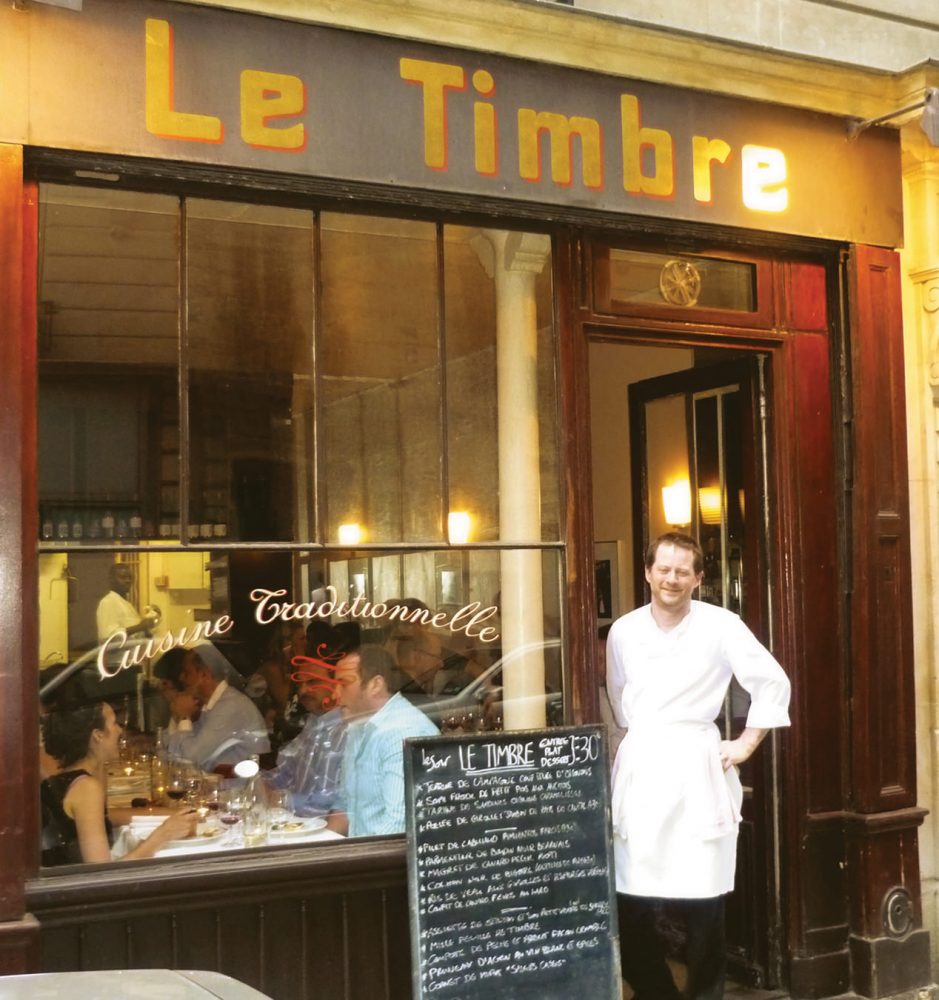 Every 12 months or so, the same feeling wells up in me—the urge to visit Paris again. Don’t misunderstand me—I don’t need to visit Paris to savour a pain au chocolat or a superb cup of coffee. Those I can find just as well here in Vancouver at Thomas Haas or the 49th Parallel café. While some of the culinary indulgences here may rival those in Europe, what Vancouver can’t offer is the opportunity to savour the pain au chocolat and café au lait in front of the Notre Dame cathedral, where I often contemplate how this 12th-century gothic masterpiece was built. Paris is indeed a city of marvels.

To be in Paris is to be a part of the electricity, the daily action, the flow of humanity as Parisians go about their lives. Though they are certainly noteworthy in their own right, the Paris I love exists beyond the Michelin-starred restaurants. My Paris exists in the cafés and restaurants and boutiques found in hidden corners of the city.

Perhaps my all-time favourite locale is Le Timbre, which can be found on rue Saint Beuve, a tiny street just off boulevard Raspail near boulevard Montparnasse. The restaurant isn’t much bigger than a postage stamp, hence the name; le timbre means just that. It seats 24 people, closely, and offers only one sitting per night. British-born, French-trained chef Christopher Wright, his sous-chef, and a waiter do it all. At a humble cost of about €30 per cover, plus wine, it can’t be beat.

Another favourite of mine is Chez Janou Bistrot on the corner of rue Roger Verlomme and rue des Tournelles. This little neighbourhood restaurant, serving traditional Provençal cuisine, is always bustling. Again, the space is cramped, but if you are lucky and the weather allows it, you can sit outside. House red or white is served in classic glass bottles that perfectly complement the simple menu and lively ambience. My Paris also exists in the shops and boutiques. But before embarking on a very specific shopping circuit, I like to begin my day on rue du Cherche-Midi at Poilâne, purveyors of the famous pain Poilâne that can be found at various locations across the city (and also at Urban Fare in Vancouver). Shopping begins at Mariage Frères, a famous colonial tea room and shop founded in 1854, which boasts over 500 varieties of tea stored in large, black antique-style tins.

Then, on to L’Eclaireur, a boutique shopping experience that combines design and fashion. They boast five locations in Paris (and a sixth in Tokyo). Kabuki is another well-edited shop where garments are elegantly displayed throughout two levels. An equally impressive Kabuki men’s store is but a few doors down on the same street, rue Étienne Marcel. Service at both is superb.

Of course, no shopping spree in Paris is complete without an obligatory visit to Le Bon Marché Rive Gauche—the oldest and chicest department store in Paris and arguably the world. Here you will find a wide selection of fashions for men, women and children, cosmetics and a vast gourmet market.

After the sensory overload of shopping Paris’s most luxurious boutiques, it’s time for a rest. Sit and be seen at Le Village, just off rue Royale, with a bottle of sancerre, a basket of fresh French bread and a salad—the perfect ending to a “guilt-free” shopping day. Alternatively, you can perch more discreetely on Le Nemrod’s lovely terrace with a glass of wine and a charcuterie plate and absorb the daily bustle of Parisian life on rue du Cherche-Midi.

In 1844, Charles Dickens wrote to the Count d’Orsay, “I cannot tell you what an immense impression Paris made upon me. It is the most extraordinary place in the world!” In 2010, for me, this sentiment still rings true.