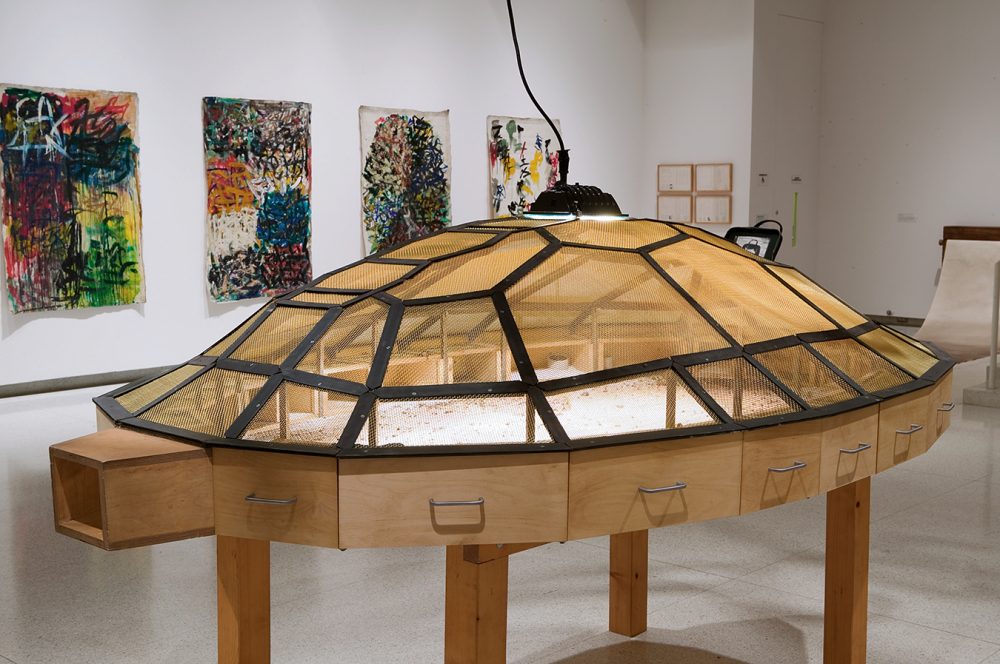 When Chinese artist Ai Weiwei was arrested by the Chinese government on April 3, 2011, it sparked a global response, including countless demonstrations and a significant petition sponsored by international museums. Weiwei is famous for art and design in various media, such as in his role as a consultant for the Beijing National Stadium, better known as the Bird’s Nest. After being detained for 81 days, he was released from prison, and while the official reason for his arrest was tax evasion, most of his supporters claimed his defence of human rights was the real cause. Weiwei’s incarceration highlights the careful balancing act required of contemporary Chinese artists: if Weiwei could be treated in such a way, what freedom of expression can be expected of his contemporaries, and how do such events play out in the international art market?

At the time, Weiwei’s Sunflower Seeds, an installation work of millions of handcrafted porcelain sunflower seeds, was on display at the Tate Modern. Prior to his arrest, a 100-kilogram pile of Sunflower Seeds sold at Sotheby’s London for $570,000—more than double its high estimate. There was much speculation concerning who had offered the work, and it was suggested that Weiwei’s Danish dealers, the Faurschou Gallery, may have submitted it, but that remains unconfirmed. With its main space in Copenhagen and a second satellite gallery that opened in Beijing in 2007, the Faurschou Gallery is one of a growing number of international art dealers intent on making contemporary Chinese art a global sensation.

Western dealers have been swift to pick up artists from mainland China; however, the majority of these dealers choose to work out of Hong Kong or London, likely because of very high art sales taxes in mainland China. Katie de Tilly, founder and director of 10 Chancery Lane Gallery in Hong Kong, represents a significant number of contemporary Chinese artists, many of whom are known for making strong cultural statements with their art. Larry Gagosian and Charles Saatchi, two international megadealers, have focused intensely on making contemporary Chinese art more accessible to their Western clients. In 2008, when Saatchi opened his new space in London, he launched with an exhibition of Chinese art.

Auction houses, too, have been fast to capitalize on the growing interest. Since 2005, Sotheby’s and Christie’s have held contemporary Asian art sales. From around the same time, certain Chinese artists have also been included in the evening contemporary sales, attesting to their rising profile and value. The auction houses have also organized art tours of mainland China for their top buyers, introducing clients to the scene in situ. Closer to home, contemporary Chinese artists have become increasingly visible—as well as controversial. In 2008, the Vancouver Art Gallery experienced difficulty when an installation, Theatre of the World, made by Huang Yong Ping for his retrospective “House of Oracles”, inspired animal rights protests and legal threats due to the inclusion of living insects and reptiles.

Nevertheless, Vancouver is well placed to be a geographical hot spot for contemporary Chinese art. In addition to holding such exhibitions, it also hosts a large number of Chinese artists, including Peng Lui and Gu Xiong, who split their time between mainland China and North America. It is no surprise, then, that Vancouver is home to Yishu: Journal of Contemporary Chinese Art, the first English-language journal to focus on this subject explicitly. A bimonthly journal edited in Vancouver and published in Taipei, it was established in 2002 and boasts Vancouver artist Ken Lum as its founding editor.

The landscape of contemporary Chinese art has transformed over the past decade from a specialty field to an international market. As a result, collectors have become enthralled with works of art that cross international borders through provocative artistic commentary. Vancouver will have its own piece of Weiwei in the next few years, when he will unveil a work commissioned by the Rennie Collection outside the Wing Sang building. Yet as Weiwei’s recent experiences demonstrate, Chinese artists are still walking a tightrope while pursuing freedom of expression, especially on their home turf.