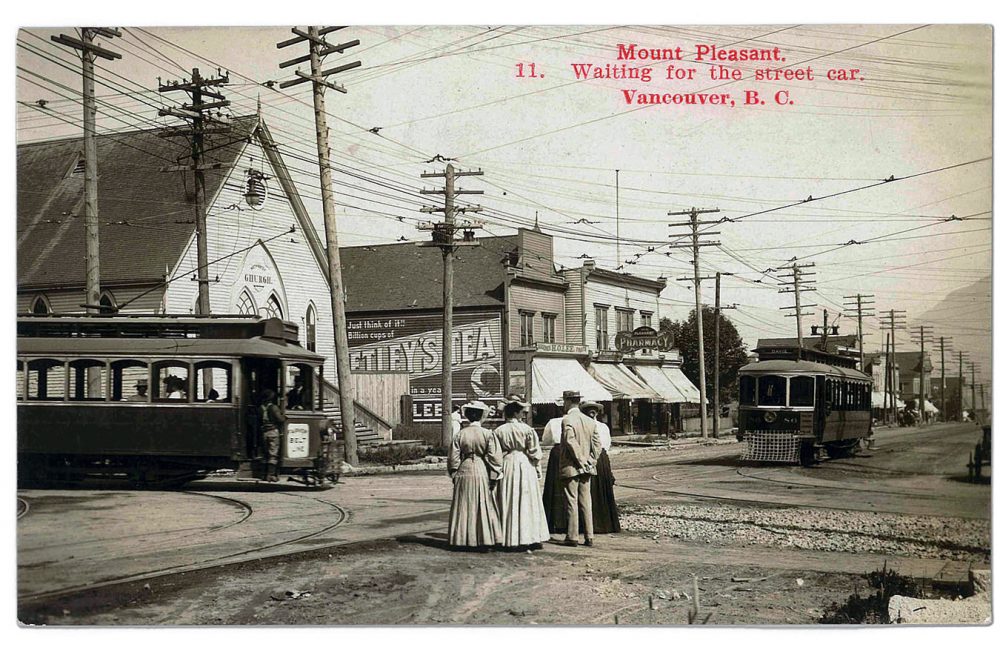 A real photo postcard of Mount Pleasant taken by Philip Timms between 1904 and 1907. Images courtesy of Philip Francis.

Pick a card, any card—there are about 15,000 of them to choose from. But this isn’t a tarot reading and it’s far from a card trick. No, it’s a close look at early British Columbia through a private collection of postcards.

Philip Francis, a portfolio manager at Macquarie Private Wealth in Vancouver, has been meticulously building and organizing a collection of printed postcards and real photos (picture postcards printed on photographic paper) for about eight years. Though today it has grown into what is likely the largest collection of old B.C. postcards and real photos in private hands, Francis remembers his first days of collecting well. “There’s trial and a lot of error. It is a long and winding road with lots of cul-de-sacs along the way.” At first, he sought out images of B.C. churches, but when they proved difficult to find, he diversified.

Most of the items in his collection were born in the golden era of postcards, a period dating from about 1904 until 1914. The end point was, of course, the beginning of the First World War, but the specific reason may come as a surprise. In the early 20th century, Germany had the advanced technology to make high-quality lithographic printed images in colour, and most early Canadian printed postcards were created there and then shipped back. The war halted this production.

One of the real photos in his collection shows a group of young boys seated astride a cannon with their hats flung sky-high in exuberant play, while three soldiers walk in the background. “When I see pictures of young men in 1901, or 1913,” Francis muses, “I wonder how many of them went off to the Great War and never came back.” Another is a view looking south down Vancouver’s Granville Street, with horses milling in the streets outside the old Birks storefront.

A glimpse into Francis’s treasured collection reveals a 100-year-old Vancouver. Ferries still took people to distant North Vancouver. Transportation was just evolving from horse-drawn carriages to automobiles. The city was gaining recognition as a major port, and the Canadian Pacific Railway was uniting east coast with west. “People wanted to show others what a modern city Vancouver was, and they would intentionally select images to portray that,” says Francis. A colour printed postcard published by Birn Brothers of London, England, in 1909.

There were characters behind the camera, too. Perhaps most important of them all was Philip Timms, considered by many to be Vancouver’s finest early photographer. “[Timms] was one of the only photographers at that time who made a conscious commitment to recording the development of Vancouver as a major city,” Francis says. “He produced between 2,000 and 3,000 images, which are all glass negatives that his family donated to the Vancouver Public Library.” Francis has collected about 700 of his real photo postcards.

Turn the cards around and the backs provide a different facet of social history. “This city is on the boom,” writes one sender in thick cursive script. But for Francis, it is the image on the front that captures him. “What excites me is if I can find a particular image that tells a story that may not be so easily written about.” With his knowledge of B.C. history, Francis thrives on deciphering what was going on in front of the lens. “It opens a window into the past in a more accessible form than the written word. It combines a number of interests, in terms of art, history and the geographical urban development of Vancouver,” he says.

An active member of the Vancouver Postcard Club, Francis finds his pastime is nicely juxtaposed with his day-to-day work. “My role professionally is to advise and make decisions around the future. But unless you get a sense of where we come from, and why, and how we got here, I think you’re less able to take a view on where we might be going.”

The collected and the collector: both are organized, particular and thoughtful. Ninety per cent of Francis’s cards are catalogued in a digital database with name, description, photographer, publisher and cost. Although the collection is very much a personal endeavour, Francis has full intention of giving it a public existence one day. His long-term goal is to scan each postcard and real photo and compile them into an online archive. It will be a logistical feat, but well worth the labour. And when will that online archive be complete? For now, let’s just say he’ll keep us posted.