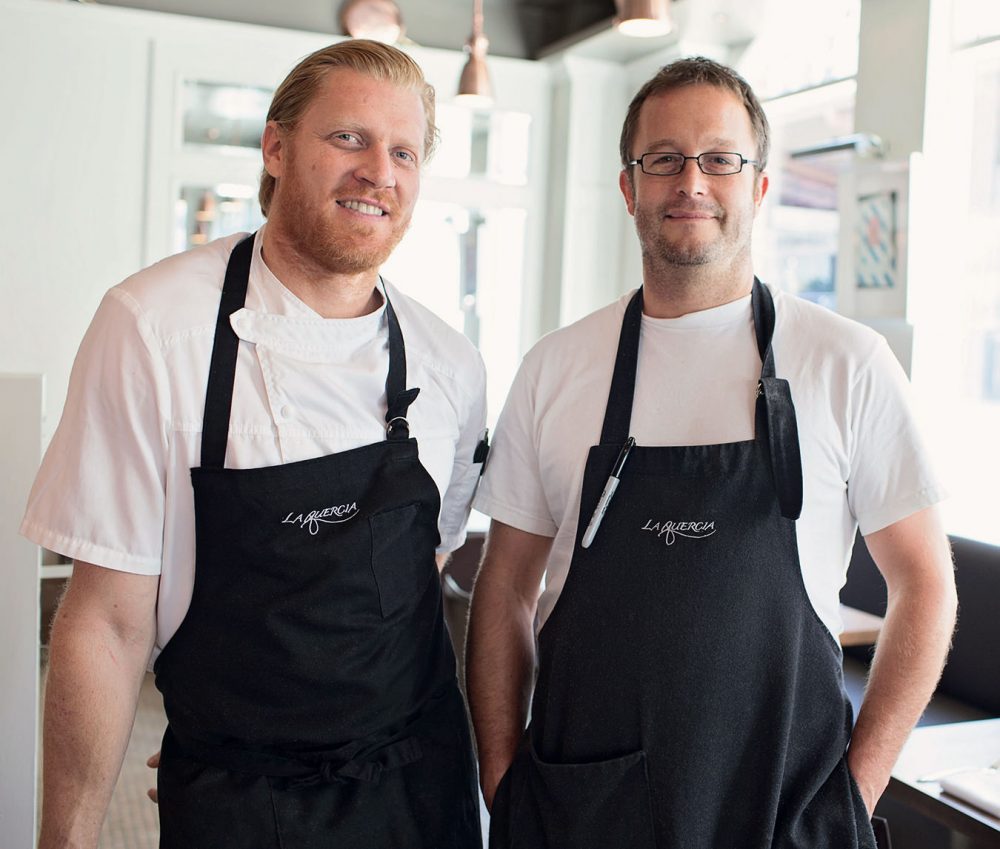 It’s 2:00 p.m. on a Tuesday afternoon, and all the phones at La Quercia are ringing straight through to voice mail. The world is put on hold for a while as chefs/owners Adam Pegg and Lucais Syme prep mise en place for dinner service. Their rhythmic chopping keeps time to the music cranked up loud. It’s a ritual that these two chefs have held sacrosanct since opening their intimate neighbourhood Oak Tree (the English translation of La Quercia) in 2008, one that has kept them grounded and connected through the steady expansion of their restaurant endeavours.

Pegg and Syme first shared a kitchen in 2005, dishing up Ligurian fare on the line at Adesso Bistro. It was a natural fit for Pegg, newly returned from over two years in Italy as one of the first Canadians to earn ItalCook’s Slow Food—Master Italian Cooking diploma at Jesi’s Higher Institute of Gastronomy. The young chefs’ friendship held fast even as their culinary paths diverged for a stretch, taking them through some of Vancouver’s most noteworthy kitchens (including Syme’s time at Blue Water Cafe and Cioppino’s), before they reconnected at Parkside and La Buca. It was here that the pair crystallized their ambitions of restaurant ownership.

Northern Italian is their culinary approach of choice, grounded by Pegg’s rigorous training in the diverse, time-honoured traditions of Italian regional gastronomy and his extensive work experience in Trentino. “Our roots in cooking are the bigger, heavier flavours—not the pop-in-the-mouth kind of flavours, but the fattier meats, wild game, butter, and heavy cheeses,” Pegg explains. Syme elaborates, “Some of our dishes may seem underwhelming or lacking wow factor. But it’s important to remember that we’re not trying to change tradition. The cuts we use are less prestigious, I suppose, but we put in the work to pull out honest flavours.”

Dividing kitchen tasks was natural from the word go, Syme focusing on butchery and Pegg gravitating toward pasta. “Our skill sets are definitely very separate, and we’re still growing in those different directions,” Pegg affirms. “I’m a little more Italian trained and I won’t want to mess with anything most of the time.” Case in point: their ethereal Agnolotti di Guido, named in homage to Lidia Alciati, the matriarch behind Michelin-starred Guido Ristorante in Pollenzo; Pegg spent nearly eight hours one day shadowing her in the kitchen to study the nuances of her signature dish. “I wasn’t allowed to touch it, but I learned every single little thing about it, every ingredient, every fold,” he says. La Quercia’s version is fastidiously true to the original: perfect al dente pasta stuffed with veal, chard, ricotta, and Parmesan in an indulgently rich veal reduction.

The partnership has flourished to encompass trattoria/deli La Ghianda just around the corner, the recently opened La Pentola Della Quercia in Yaletown’s Opus Hotel, and long-anticipated wine bar L’Ufficio, which is on track for a winter launch in Kitsilano. Their weekly dinner service together at La Quercia remains a touchstone. It maintains the pair’s intuitively seamless synergy, enabling each to step into the other’s spot on the line midway through a shift without missing a beat. “That Tuesday night is all about us,” Syme reflects with a broad smile. “We could do covers for 60 people in an evening and not need to speak a word. It’s a unique relationship, for sure. That’s why we started this grand adventure in the first place, and it’s our truest pleasure.”