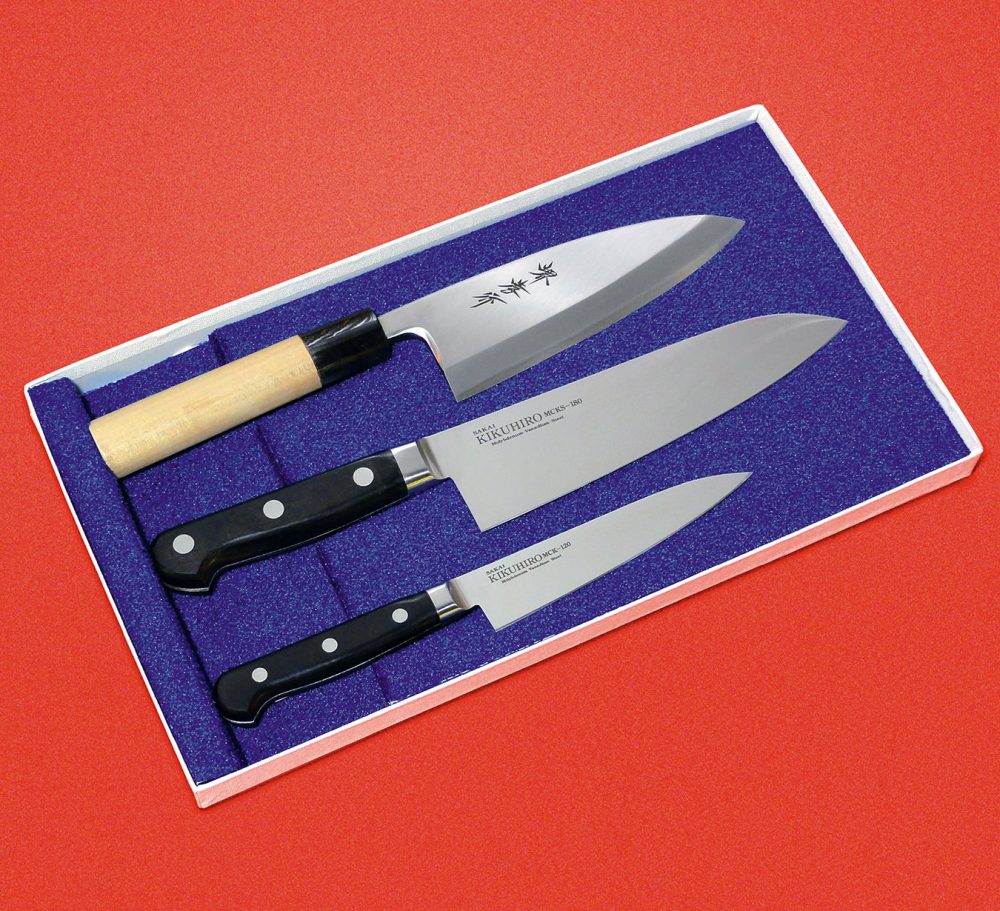 Japanese knives as we know them today (and they are most acutely used in everyday practise by highly skilled chefs), cannot really be discussed without a history lesson. When, in 17th century Japan, the Tokugawa Shogunate granted Sakai a seal of approval, things really took off. Sakai is the centre of fine knife production for a very good reason: it was the centre of Samurai sword production, until, as part of the Meiji Restoration, in the 19th century, carrying swords was banned, all part of an attempt by the central government to “modernize” the country. So, the vast majority of swordsmiths turned their skills, and their attention, to cutlery. A nearly byzantine array of knives for every purpose imaginable is the grand result.

Takefuyu “Take” Seki owns Santoku Equipment Office, in Yaletown, and he can expound for hours on the development of the knives he has on display (and for sale, of course), but he begins by asking, “Do you know much about Japanese history? Because these knives all come from a rich tradition.” Not only that, but even a casual observer can see there is a wide variance in size, shape, weight, and price. “Japanese blacksmiths think about the specific use, and the expected cost of a knife, before they begin work,” says Take. The high-carbon steel, whether blue, white, or yellow of honyaki knives, are true-forged, of the single substance. Kasumi knives, like their iconic samurai sword predecessors, are made from both steel and soft iron, forged together. Further, the specialized San Mai knives have a pure steel cutting edge, with an iron/steel blade jacketing it. The hardest and purest steel is exposed only at the cutting edge. It does not need to be stainless, since the knife is usually sharpened daily.

Strength, durability, and highly specific use are the hallmarks of these implements. A sashimi knife, for example, is very long, very thin. It is used most acutely to cut into a raw fish to extract umami, the most flavourful, inner section of the fish with extreme accuracy and finesse, no rough edges or pulling of less prized sections of flesh into the cut. Most knives have a one-sided edge, since the cutting motion is never to push forward, or to “saw” any meat of vegetable, but rather to stroke the knife precisely through the object, towards one’s body. It is a skill that is acquired only with repetition, and such chefs as Yoshi Tabo will tell you, dead-pan honest, that it takes 10 years to really be called adept at it.

Santoku (“three virtues”) refers to a style of knife, used for three purposes: cutting meat, fish and vegetables. It is, thus, a general purpose knife, designed to create harmony between the size and weight of the blade with that of the handle. The tang, which is the way a blade is attached to a handle, is vital in this balance, since a full tang (the blade is incorporated right to the end of the handle) creates more heft. The hand-feel of these knives is superb. The tang can be half way through the handle, as well, so a lot depends on personal preference in this regard.

They can feature small grooves in the blade, theoretically to make slicing easier, as materials don’t stick to the blade. But Take says, “That is fine, but when you sharpen the blade, and reach the grooves, then the knife is not useful anymore.” In short, the Santoku is the ultimate well-balanced knife.

What, then, is the necessary start in a knife set for the home chef? “A big Santoku chef’s knife (an eight to 10 inch blade), a paring knife, and a heavy knife, almost like a cleaver, called a deba. Then you can get into more special knives, as you learn more.” The hand-feel, the balance of these instruments, is something each individual must experience and gauge for themselves, and Take is a fine guide into this complex world. Just be prepared for a little history lesson, which will make your cutting days that much richer.