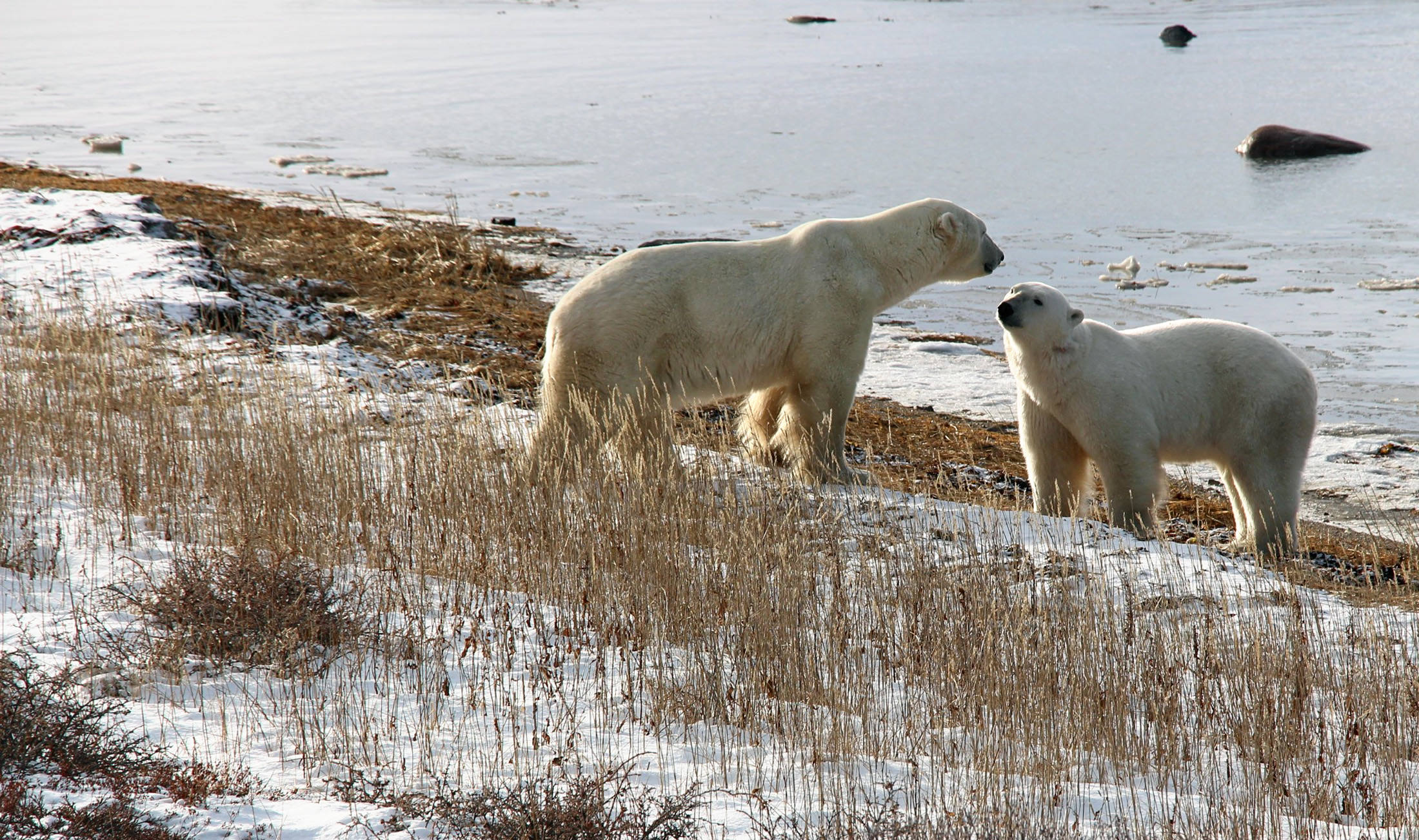 At the edge of the unwelcoming shores of Hudson Bay a rainbow suddenly appears, both ends visible above the granite-grey, choppy waters. The ray of sunshine that comes with it is equally fleeting, bookended by sharp winds that sting any exposed inch of skin with ice.

We’ve been in Churchill, Manitoba for less than an hour but this sparse, frozen landscape is already overwhelming.

There may be no roads in or out of this tiny hamlet (population 800) but in the weeks before the deep freeze of winter really takes hold, Churchill explodes in size. In the Tundra Inn restaurant, hundreds of plates heaving with elk meatloaf, bison stew, and the house-made veggie “Borealis Burger” are served daily to tourists who have paid handsomely to stay in modest accommodations for a few days. We have come from all over the world for one reason: to spend time in the town commonly known as the “polar bear capital of the world.”

It’s the end of October, and inside the newly opened Polar Bears International House a chalkboard marks off 131 days that the local Western Hudson Bay polar bear community has been land-based, waiting for the sea ice—floating ice that forms over the ocean—to reform. In the 1980s, this same community of bears would typically spend one month less on land each year than it does today. During the past 30 years, local polar bear numbers have declined 30 per cent.

Polar Bears International (PBI) chief scientist, Dr. Steven Amstrup, has been working in polar bear research for 40 years, first as a government agency scientist in the United States and, since 2010, with PBI. Changes in the polar bear population, he says, can be tied to the decline of sea ice since the mid to late 1990s.

The bears depend on the sea ice to hunt, the bulk of their diet comprising two species of seals. “The seals swim around under the ice, come up to breathe, and that’s where the polar bears catch them,” Amstrup explains. “So, when we saw the sea ice was declining, we knew that there were problems to come. Polar bears can swim pretty well, but they can’t swim as well as the seals—they need to be out on the ice.”

We head out on Tundra Buggy One—the smallest of an 18-buggy fleet, and the only one not employed for tourists—designed to manage the extremely makeshift tundra roads (leftovers of U.S. and Canadian Cold War military manoeuvres). As we head further into the tundra, the sky becomes a cathedral-like dome, frescoed with the blue and gold light of the sunrise.

A large adult male polar bear appears from behind low scrub and is walking past us, his fur glinting yellow against the white snow. He is magnificent, lifting his nose every few steps to sniff the air. We are silent, still, hoping to slow down his passage, to drink in every aspect of this incredible beast. He passes us, but further up the track, a female and two cubs are heading to the shallow banks of the river that leads to the bay. It is a thrilling sight. 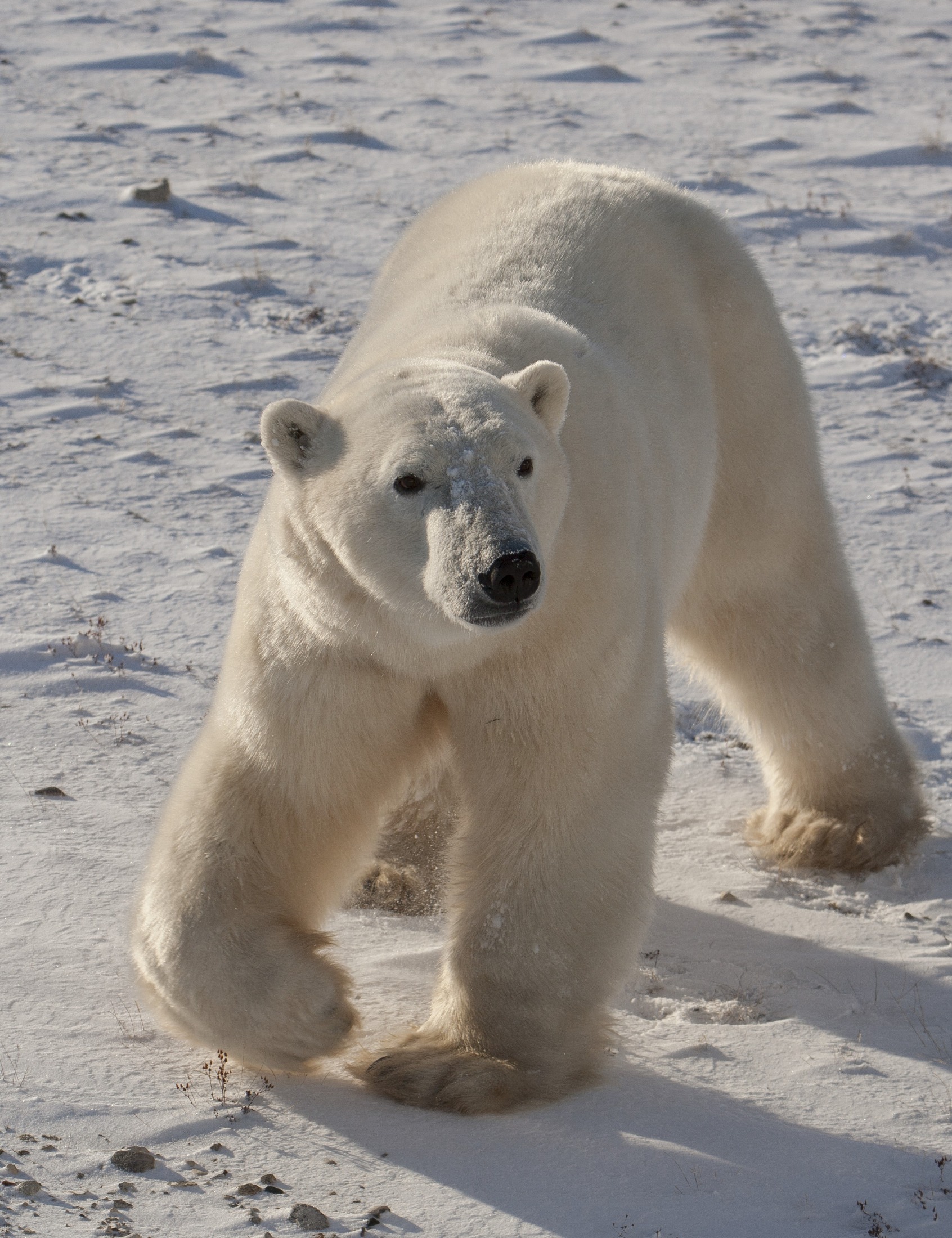 There are 19 polar bear populations across the circumpolar area, with Churchill’s 846 bears comprising the southernmost community. Ten thousand years ago, polar bears lived as far south as the Baltic Sea in Sweden and Denmark. “As the world warmed, and we entered the current Holocene period—the period in which human beings have flourished—the sea ice stopped forming in that region,” says Amstrup. “And the polar bears didn’t move onto land, they didn’t evolve into another way to stay alive, they just disappeared.

“Mother Nature,” he adds, “has already shown us that if we allow the sea ice to disappear, polar bears will disappear with it.”

In the face of what it sees as a looming catastrophe, PBI’s mission has pivoted to outreach and education. It works with schools across the globe, providing educational materials, live-streaming interviews with polar bear researchers from the buggy, and operating 24-hour live webcams. Its new visitor centre in Churchill (which also provides accommodation for visiting PBI staff and scientists) has a big part to play. Funded in part by a private $1-million donation from Dani Reiss, president and CEO of Canada Goose, PBI House—a wood-framed, 3,000-square-foot structure built on donated land on Churchill’s main street—received 187 visitors when it held a community opening on October 5 and 6, and counted more than 1,000 people through its doors before its official opening on November 3.

“They don’t know about the concerns we have for the future of polar bears,” says Amstrup. “And many of them have influence; it’s expensive to get here. These are visitors who have resources; maybe they can go home and rub shoulders with senators and congressmen, with the business leaders in their community—encourage them to do something.” 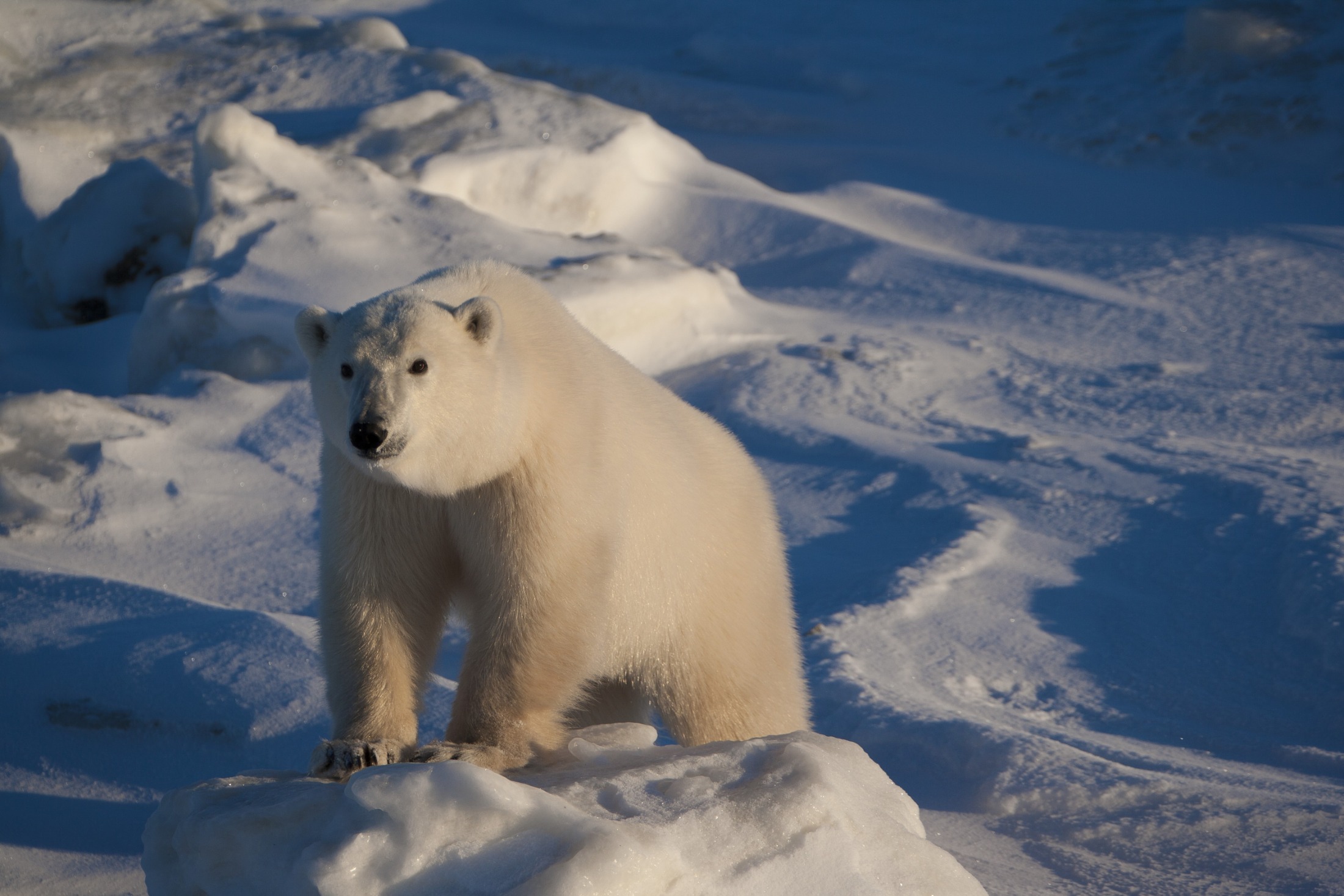 Canada Goose has sponsored PBI since 2008, donating more than $3 million to date (separate from Reiss’s personal donation), as well as kitting out PBI scientists and staff in Arctic-appropriate apparel. In 2018, to mark its decade-long relationship with the non-profit conservation group, Canada Goose created the customized Pantone colour PBI Blue.

Amstrup says he is delighted to have the support. “Canada Goose has a business model built around sustainability—local construction of their clothing, local sourcing of the materials, and materials that are sustainable.

“You can buy a winter jacket stuffed with a product of the oil industry, which is not sustainable, or you can fill it with down, which is. And that’s exactly what we are here trying to figure out: how can we live in the future in a way that is sustainable?”

We count 11 bears throughout the day. One bear pulls himself out of the bay and rolls around in the snow for a good 15 minutes before running off. We see two males size each other up, go head-to-head, then part. During their land-based months, polar bears lose an average of 1 kilogram of body weight per day. These males are hungry, too depleted to fight today. They know that it’s here that the ice will freeze soonest, providing them a route to their hunting grounds.

For now, all they can do is wait.