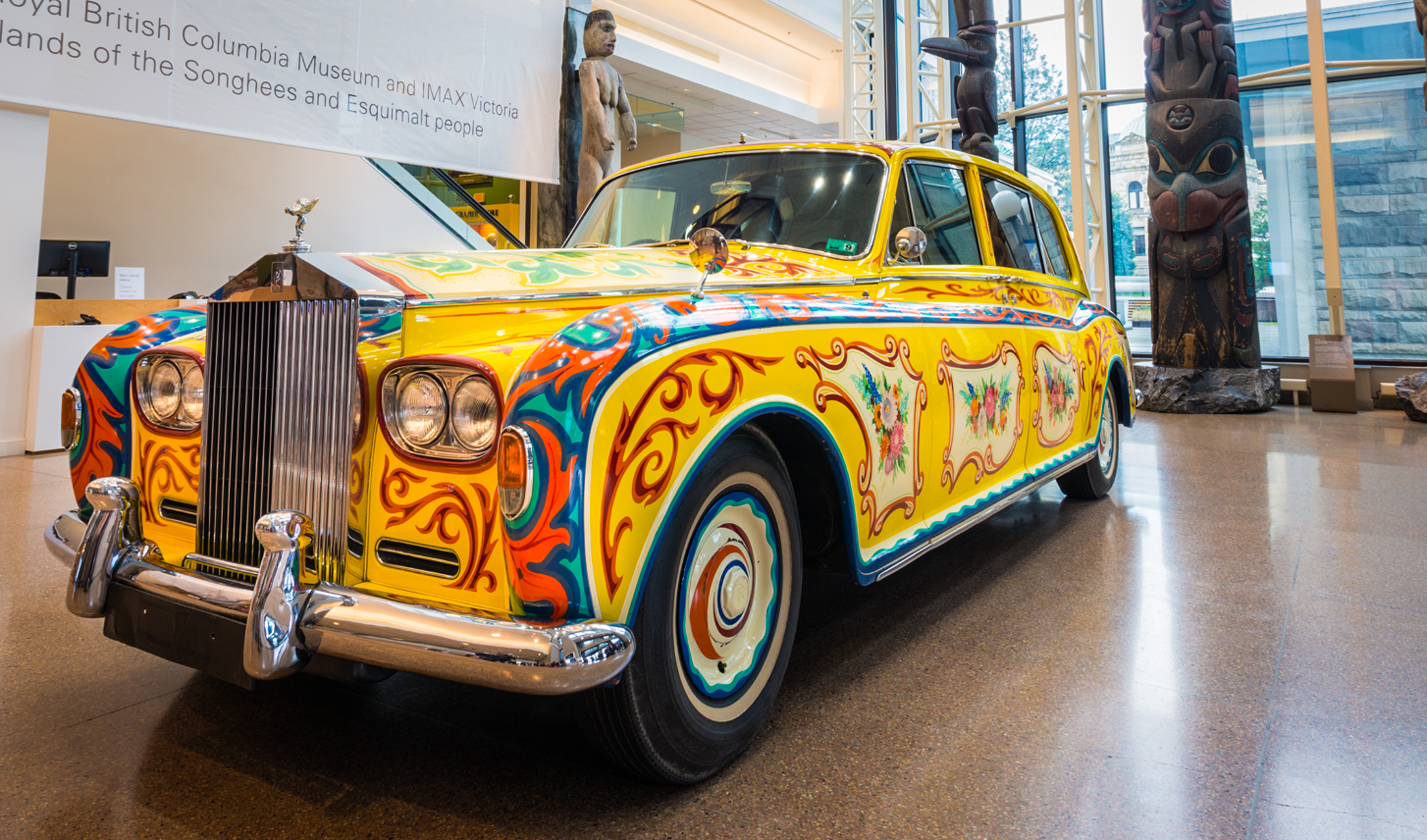 Image courtesy of the Royal BC Museum.

With its bright chrome yellow body and floral side panels of dahlias and delphiniums, the Rolls-Royce on display in the lobby of the Royal BC Museum in Victoria is unlike any other. Its bonnet and boot are decorated with colourful curlicue scrollwork, and its roof sports a stylized symbol of Libra, the zodiac sign of its first owner.

John Lennon bought the 1965 Phantom V limousine before he even owned a driver’s license. Paint it black, he ordered, with black leather upholstery. It was manufactured at a factory built atop potato fields in the Cheshire railway town of Crewe.

He placed the order immediately after the British release of Beatles for Sale, the band’s fourth studio album, in December 1964, and it was delivered the following June 3.

The right-hand drive vehicle is a behemoth, tipping the scales at 3,000 kilograms (more than twice the weight of a modern Toyota Prius). At 6 feet, 7 inches, it is as wide as the band’s friend Long John Baldry was tall. (Baldry, a blues singer, later moved to Vancouver.)

It also stretches 19-feet, or the length of about three-and-a-half Ringo Starrs. The drummer was chauffeured with fellow Beatles Paul McCartney and George Harrison in the car to Buckingham Palace to receive medals of the Most Excellent Order of the British Empire. (You can see Ringo giving a thumbs-up from a rear jump seat at the 51-second mark of this British Pathé newsreel.)

Lennon later ordered further interior renovations. A radio-telephone was installed. A refrigerating system was added to the trunk. The back seat was replaced by a bench, converting into a bed. The windows were tinted for privacy. The car horn played the tune, “Lili Marlene.”

A portable television was placed alongside a radio and eight-track tape player, as was a state-of-the-art Philips turntable for 45-rpm records with a unique floating suspension to prevent the needle from skipping when the car was in motion. A 10-watt loudhailer allowed the prank-loving Beatle to address pedestrians dawdling on a zebra crossing like the one famously portrayed on the cover of Abbey Road.

The limo was shipped to Spain for Lennon’s use during the filming of How I Won the War. The dusty and rock-strewn Andalusian roads left scratches and scuff marks. In any case, Lennon had grown bored of the all-black vehicle. Back home at Kenwood, his mansion at Weybridge, Surrey, England, he was inspired to commission a garish paint job in the Romany style. A local artist named Steve Weaver completed the work for the J.P. Fallon Ltd. coachworks in May 1967. The bill was £290, about $9,200 in today’s dollars. 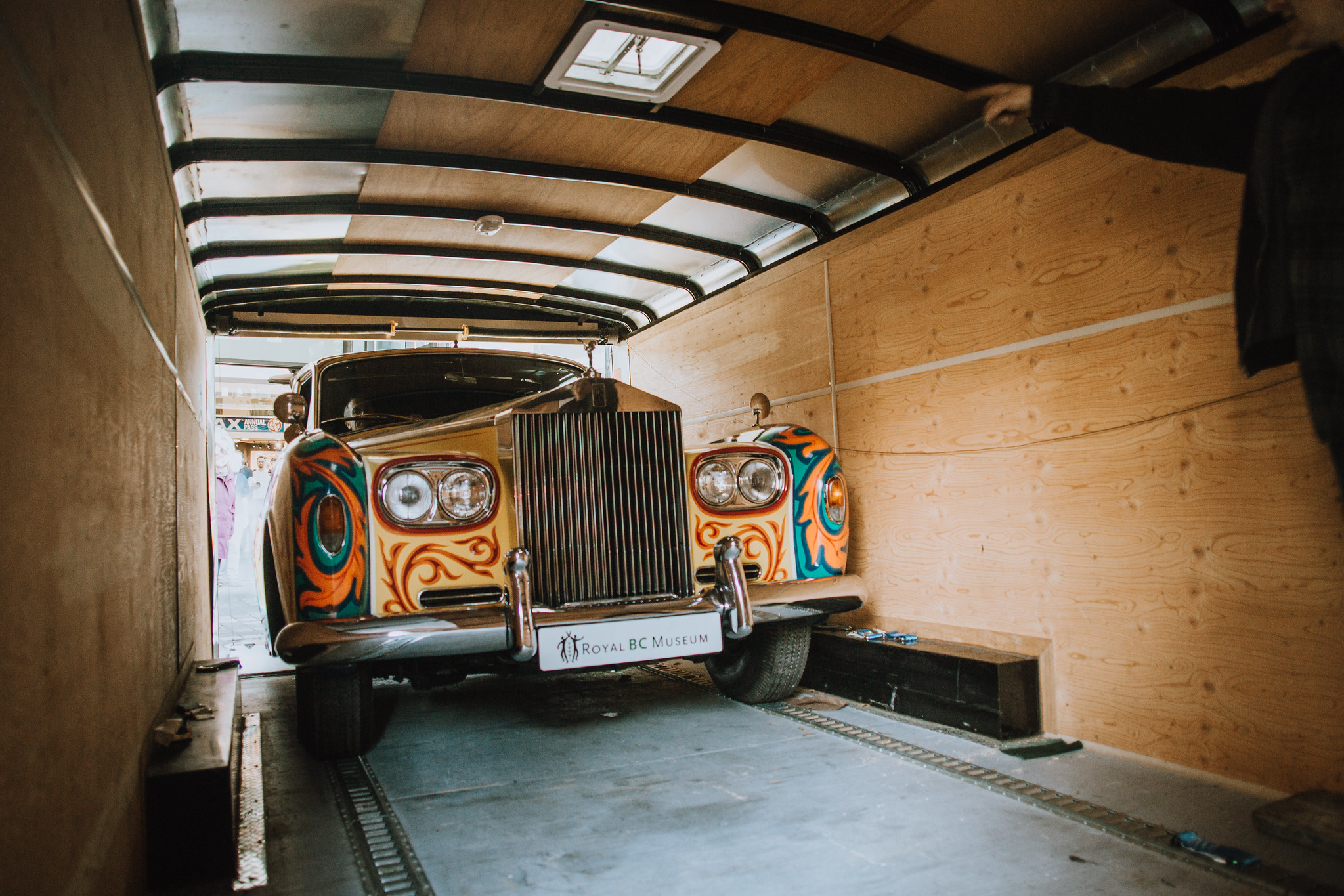 The Rolls-Royce arrives. Photo courtesy of the Royal BC Museum.

The car was an immediate sensation, thrilling Beatles fans and outraging traditionalists. Lennon himself liked to tell the story, perhaps apocryphal, about the elderly woman angered by the groovy, Summer of Love paint job. “You swine! You swine! How dare you do that to a Rolls-Royce!” she shouted. “Ugly, uncharming and pretentious bit of anti-taste,” harrumphed another critic. A Rolls-Royce spokesman said, “I am afraid the car is Mr. Lennon’s property and he is at liberty to do as he pleases.”

The car followed a long and winding road before arriving in a museum lobby in the British Columbia capital. After the Beatles broke up, Lennon shipped it to his new home in New York, where it was loaned to Bob Dylan, the Rolling Stones, Elton John, and the Moody Blues. It was sold seven years later to the Smithsonian Institute to settle Lennon and Yoko Ono’s dispute with the taxman. The Cooper-Hewitt Museum in New York put it on display for 15 months before parking it in storage to save on insurance.

There it rested until placed on auction at Sotheby’s in 1985 with an estimated top price of $300,000 (US). Vancouver billionaire Jim Pattison, who made his first fortune as a car dealer, bought it for a whopping $2,299,000 (US) for display in his Ripley’s Believe It Or Not Museum in South Carolina. The car was loaned for display in a glass box at Expo ’86 in Vancouver, a deal possible because Pattison happened to be chairman of the World’s Fair. Pattison then donated the car as a gift to the province and it was displayed at the Transportation Museum of British Columbia in suburban Surrey. After six years, it was transferred to the Royal B.C. Museum.

These days, the one-of-a-kind car is the responsibility of Lorne Hammond, a curator who treats the automobile both as an artifact and a painting. “I hover around it like a protective mother hen,” he says. 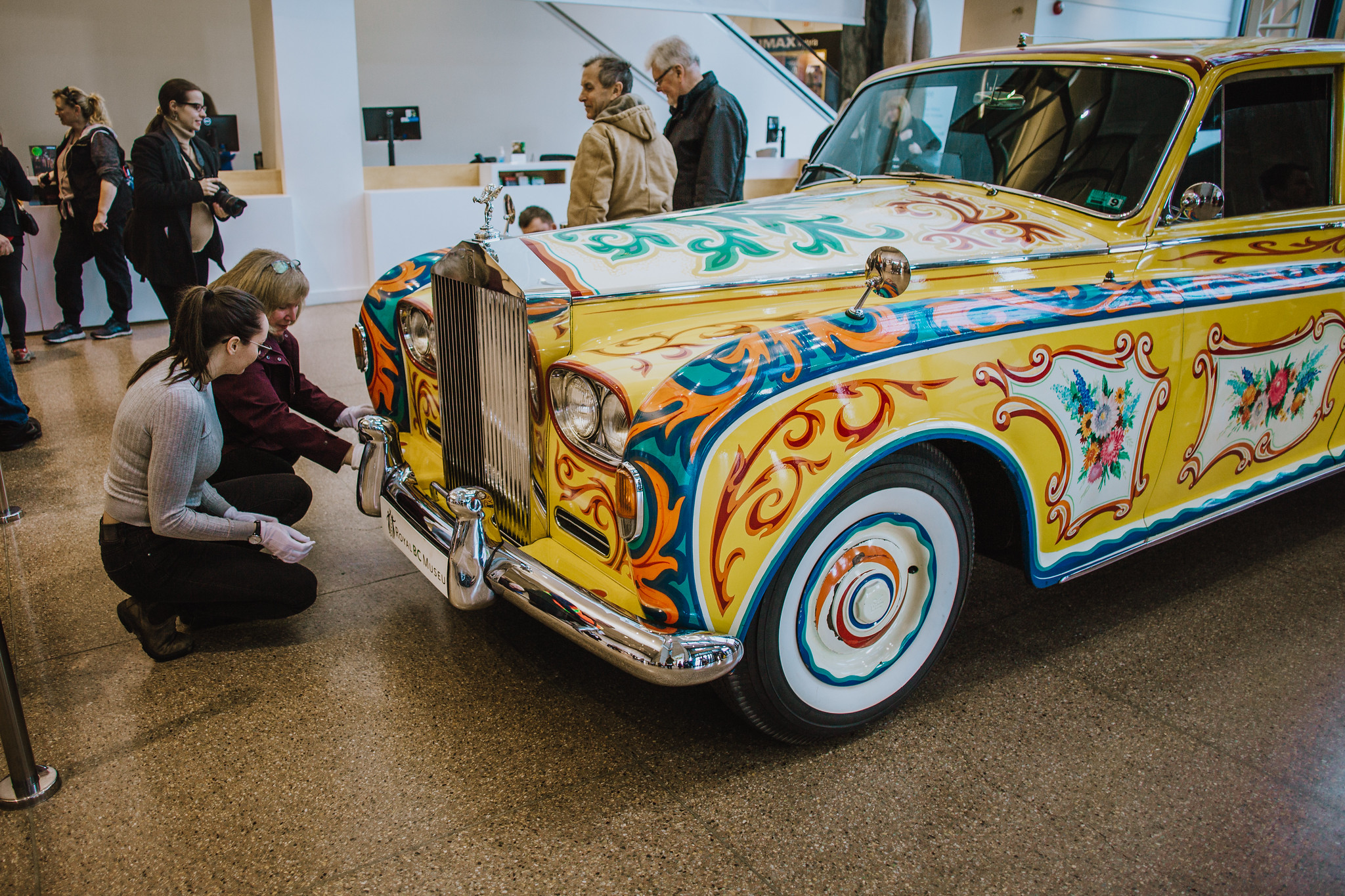 Image courtesy of the Royal BC Museum.

Lennon first revealed the repainted Rolls to the public shortly before the release of Sgt. Pepper’s Lonely Hearts Club Band, the trailblazing psychedelic album. Next, Lennon purchased another Phantom V, which he painted in white livery with an all-white interior shortly before the release of the group’s next LP, simply titled The Beatles and better known as the White Album.

The car was a concept and a happening. “This is art,” Hammond insists.

The one thing Hammond will never do is get behind the wheel of the Rolls. He doesn’t want to be responsible for a Beatles fender bender. “As the curator,” he says, a little ruefully, “you can’t be joyriding.”

Get on the road with Transportation.