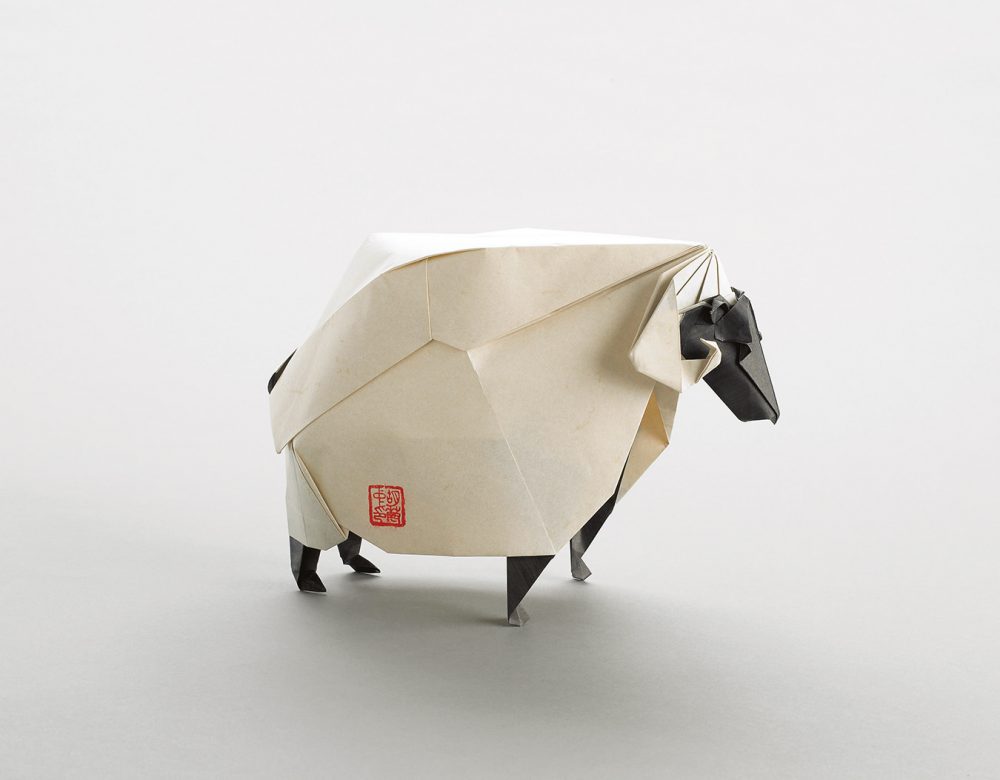 “Year of the Sheep,” a Chinese New Year creation.

Origami, the art of paper folding, literally means just that in Japanese: oru is “to fold” and kami is “paper”. A union between the mathematics of geometry and the visual arts, paper folding is a place where right brain meets left. Joseph Wu, a local origami artist well-known on the international origami scene, makes his living in this paper-folding world. It’s not uncommon to find Wu with his hands full in the midst of creating a new invention. On this particular day he’s working on an unidentifiable creature that resembles a prawn.

“It’s actually a mer-bunny,” Wu says with a smile. “A gift for my five-year-old son.” These are not your average paper cranes, nor is Wu your average origami artist. He is imbued with its history, but he brings a bracing newness to it as well.

The practice of origami likely began in sixth-century Japan after paper was introduced to the country by Buddhist monks. It is an art form passed along by way of oral tradition, and only simple designs survived as nothing was recorded. Modern origami is founded on the same principles of paper folding, but marks a distinct deviation from these centuries-old models.

Like most origami artists, Wu looks up to master folder Yoshizawa Akira, who is widely regarded as the grandmaster of origami. Master Yoshizawa started publishing books with new models in the 1950s and by the end of this life—he passed away just five years ago, on his 94th birthday—he had created over 50,000 models and exhibited his work in the Louvre.

“Yoshizawa is one of the primary forces that brought origami out of traditional handicraft and into the realm of modern art … he had a way with paper that few artists have,” Wu explains. “He wasn’t into a lot of detail, but he just had a way of doing little subtle creases and curves and bringing life to his subjects.” The same words could be said of Wu, whose pieces capture movement in a similar lifelike way. 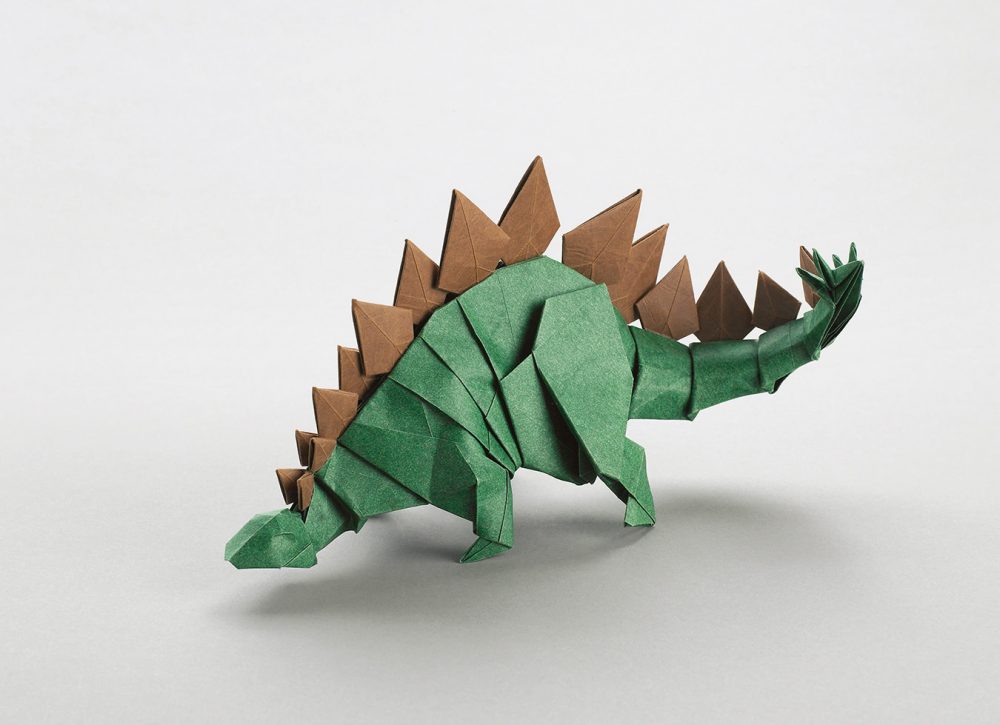 Born in Hong Kong, Wu started making origami when he was three years old. “My dad bought me an origami book, and I read the pictures,” he recalls. He moved to Vancouver at age five, and his art continued to be a passion, even while completing his computer sciences studies at the University of British Columbia. When Wu lost his job following the dot-com crash of the early 2000s, he turned his art into a full-time career.

His original designs vary from quaint and seemingly simplistic objects, like a feather or a ball, to the incredibly complex—a white rhinoceros, a life-sized tree, or the 44-foot-long Japanese dragon he created for a theatre project last year. To explain his creative process, Wu references Malcolm Gladwell’s book Blink which delves into the idea of subconscious cognition. “Gladwell explains how we can very, very quickly process things that might take a long time if we were to sit down and think about it,” Wu says. It is in this way he processes his origami. “I do the research I need, come up with the parameters I want for my design, and then in the span of about a minute, the design just appears in my head.” At that point, he knows that he can take a flat piece of paper sitting in front of him and form it into the finished object. Typically, it takes between 10 and 20 revisions before he’s fully happy with the piece.

These days, commissioned work such as installations and advertisement campaigns keep him busy. A recurring job with Canadian Business magazine has him creating origami out of money for each issue (“When I’m done a piece, I just unfold it and spend it,” he says). Thus far, his favourite ad campaign was for Stolichnaya vodka, for which he made a series of origami animals and butterflies. When he travelled to New York one summer to attend an origami convention, the ads were all over the city. “Telephone booths, billboards, subway entrances, all with my origami on it—it was totally unexpected.” 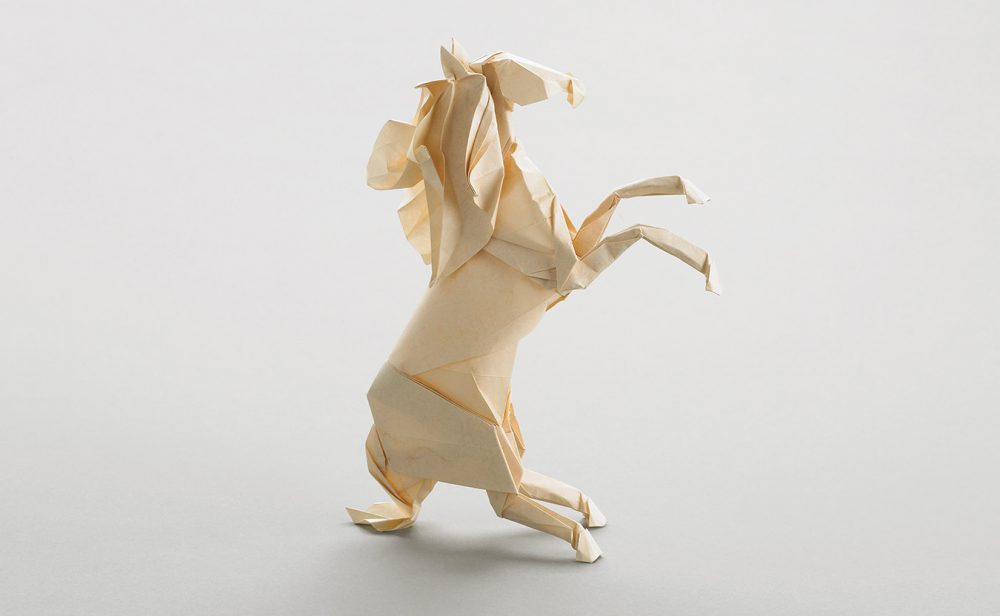 “Seren’s Horse,” a design Joseph Wu dedicated to the newborn child of a family friend.

About three years ago, Michelle Biggar of MGB Architecture and Design approached Wu to create a light sculpture for the Fairmont Pacific Rim hotel’s Pan-Asian restaurant, Oru. The stunning, leviathan-like installation is made of synthetic fibre tessellations and installed along the ceiling, spanning 180 feet. It resembles an intricate, mountainous raised-relief map flipped upside down and lit from within. It was a race against the clock to complete the work, and Wu toiled night and day on the project for six weeks in order to finish in time for the hotel to open its doors for the Vancouver 2010 Olympic Winter Games.

Next on the list, Wu will create a hanging pendant light for Oru, consisting of 200 flying red dragons. But until a special shipment of washi (traditional handmade Japanese paper) arrives, Wu’s creative energies will be channelled into yet more folding inventions, like the elusive mer-bunny for one lucky five-year-old boy.

This story from our archives was originally published on December 31, 2014. Read more stories about the Arts.