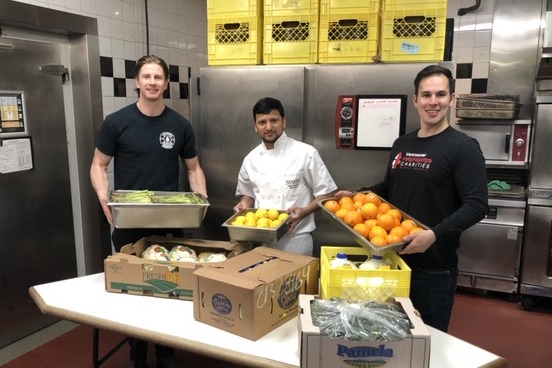 Vancouver firefighters collect food from Seasons in the Park, one of several local restaurants to support their initiative. Image courtesy of Vancouver Firefighter Charities.

Staff at Hy’s Steakhouse & Cocktail Bar and several other restaurants have partnered with a group of off-duty Vancouver firefighters to bring fresh food to people in need.

Forty-five care packages composed of whatever kitchen staff could find went out last Friday to elderly and vulnerable people unable to leave their homes due to self-isolating measures.

“The window of opportunity to get these care packages out was very tight” as the food baskets consisted mostly of fresh produce rather than prepared meals, says James Docherty, executive director of Vancouver Firefighter Charities.

“Over the next couple of days, we’ll be evaluating the need for follow-up deliveries,” he adds. 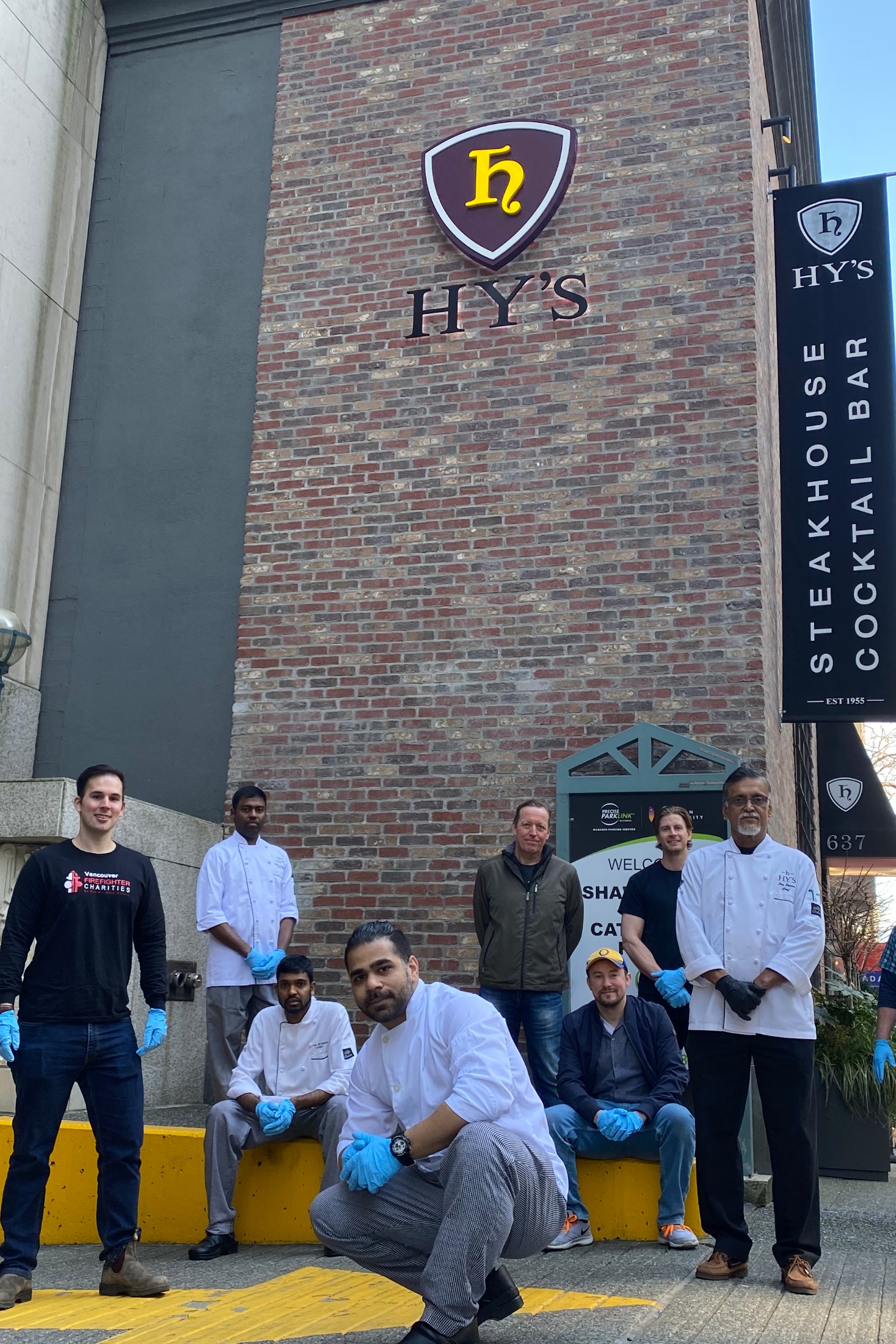 The firefighters’ organization is well suited to act as a vector for meals, since it already supports approximately 2,500 vulnerable students a day with its Snacks for Kids initiative, one of several programs it runs in the Lower Mainland. Delivering food (as well as hygiene supplies) to seniors in this moment of crisis, Docherty says, “just seemed like the natural thing to do.”

Back at the award-winning steakhouse, the decision to empty its kitchens was an easy one to make, according to Megan Buckley, the chief operating officer of Hy’s of Canada.

“As we were busy shutting down, I asked our chefs and managers to look into what they could do with their inventories,” she says.

Whether sent home in care packages to support staff and their families, or donated to community organizations such as the Vancouver Firefighter Charities, Buckley wanted to make sure that as little food as possible from Hy’s five locations nationwide was wasted. 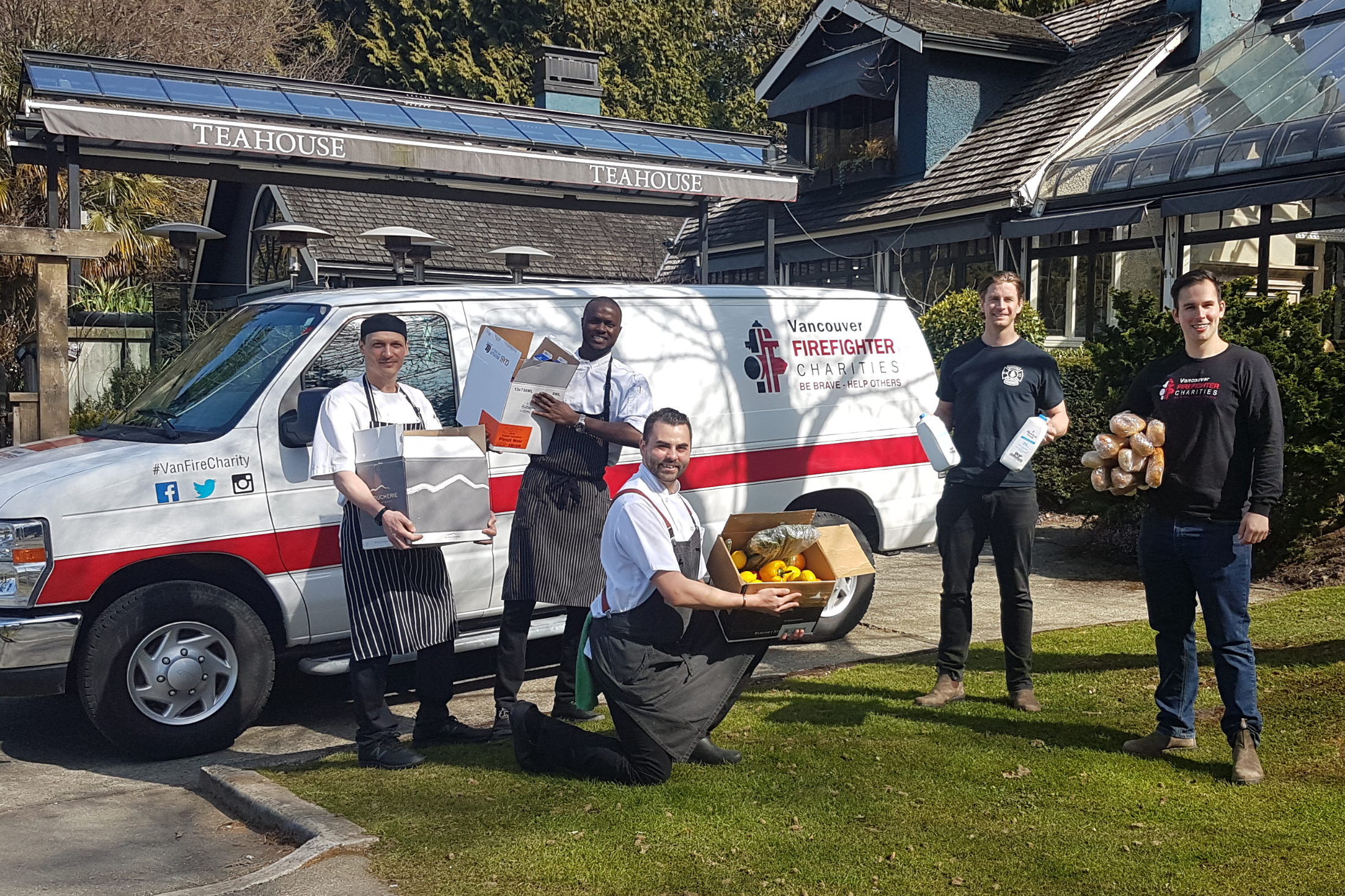 It’s a sentiment echoed by several other restaurateurs in Vancouver. Cardero’s, the Teahouse, the Sandbar, and Seasons in the Park (all part of the Sequoia group of restaurants), the Belgian Chocolate Café, and the Holy Crab all joined Hy’s in contributing their perishables to the firefighters’ food baskets as well.

Meanwhile, some local restaurants are showing their appreciation for frontline workers in the fight against COVID-19 with discounts for those most at risk of infection.

Ron MacGillivray, owner of Fable Diner, says his establishment is offering a 40 per cent discount to all health-care professionals.

“Including family doctors,” he notes. “They’re all pitching in.”

And the legendary Tojo’s is offering a 15 per cent discount to frontline health-care workers, as well as launching a special take-away menu for pickup or delivery.