In the last year, many Vancouverites have developed a keener ear and a deeper appreciation for birdsong, tuning into the birds that continue to call to each other and cheep hopefully from our city’s trees and green spaces. In this story from our archives, we share some of the best outdoor spots to find our feathered friends and enjoy some (socially distanced) birdwatching in the Lower Mainland.

It’s a crisp summer morning in Stanley Park near Second Beach. A stiff breeze rolls in from the inlet, tankers look tired in the bay, and the air is ripe with the smells of low tide. Aside from a few keen joggers, the Seawall is devoid of crowds this early, and the concession’s sandwich boards are still tucked away—but not everyone is at rest.

The single, harmonious melody of the outdoors is actually made up of multiple notes from some very busy bodies: a double-crested cormorant makes a guttural clicking from the shore; seagulls wrestle noisily over a bag of ketchup chips left on the pavement; Canada geese murmur to themselves on the lawn; a great blue heron chick squawks a prehistoric tune from its nest; and a swainson’s thrush calls out melancholically from the depths of the woods. The birds are busy this morning, and the few humans out and about this early are treated to their show. 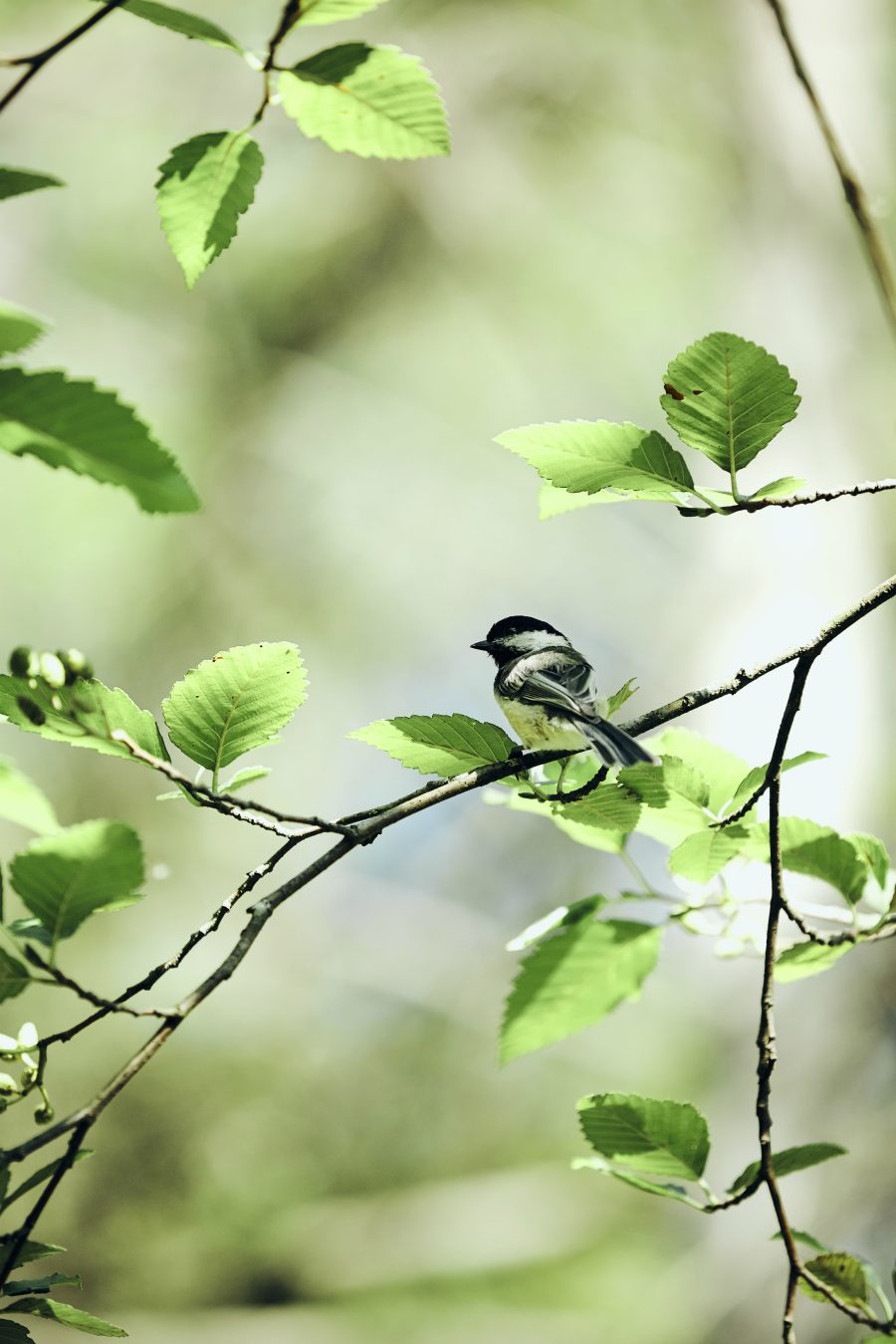 English Bay-Burrard Inlet, including Stanley Park’s coastline, is a designated Important Bird and Biodiversity Area of Canada; along with the Fraser River Estuary, the Greater Vancouver Watershed, and Pacific Spirit Regional Park, the park is also recognized as important resting place for migratory and resident birds. Translation: the Lower Mainland offers plenty of optimal spots to birdwatch.

This park, however, is particularly unique. “Stanley Park has a good diversity of habitats,” explains Else Mikkelsen, team leader of the Stanley Park Ecology Society’s bird monitoring program. “So, it caters to many different types of birds specializing on either different trees, habitats, or food types. There has been a total of 150 species of birds found in the park, but it depends on the season. On an average day walking through the forest, you’ll see 45 species, and 30 additional species walking around the Seawall in the winter.”

Beaver Lake is the only place in Stanley Park with hardhack, a shrub that the common yellowthroat loves. The lake’s cattails, sedges, grasses, and proximity to the forest also offer optimal diversity for goldfinches, willow flycatchers, Rufous and Anna’s hummingbirds (the latter was named Vancouver’s Official City Bird in 2017), and brown-headed cowbirds (who lay their eggs in other birds’ nests, which these unsuspecting parents will dutifully raise, as birds don’t know what their hatchlings are supposed to look like). 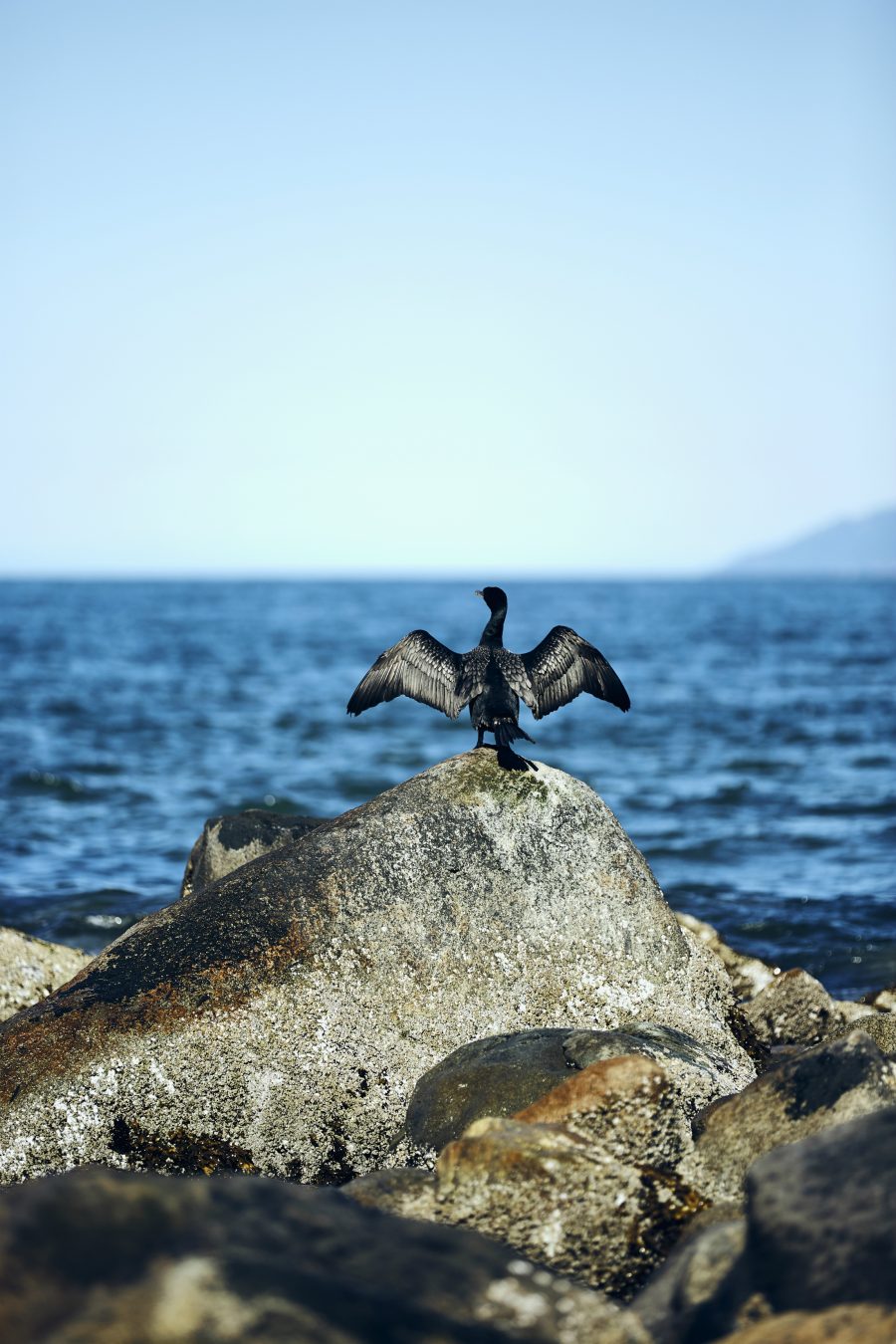 A double-crested cormorant bares all just off the Seawall, Stanley Park.

The pathway through the forest to Beaver Lake is also the habitat of specialized species such as the pileated woodpecker, barred owl, chestnut-backed chickadee, and red-breasted nuthatch. During the winter, chatty migratory shorebirds such as the surf and white-winged scoter and black oystercatcher convene in flocks along Stanley Park’s shoreline, an impressive spectacle best witnessed from the Seawall between Third Beach and the Lions Gate Bridge.

Another popular Lower Mainland site for birdwatching is Delta’s George C. Reifel Migratory Bird Sanctuary, considered one of the top spots in the province and even the country. It boasts 300 hectares of wetlands, natural marshes, and dykes; at the kiosk, visitors can purchase a bag of birdseed and check a list of the sanctuary’s regularly updated sightings. Just under three kilometres of walking trails offer birdwatchers various viewpoints for the 300 species that have been recorded here.

During migration, some birds will use the sanctuary for rehabilitation, meaning rarities can often be spotted; one summer, a lone trumpeter swan rested here until he could rejoin his migrated flock in the Yukon. 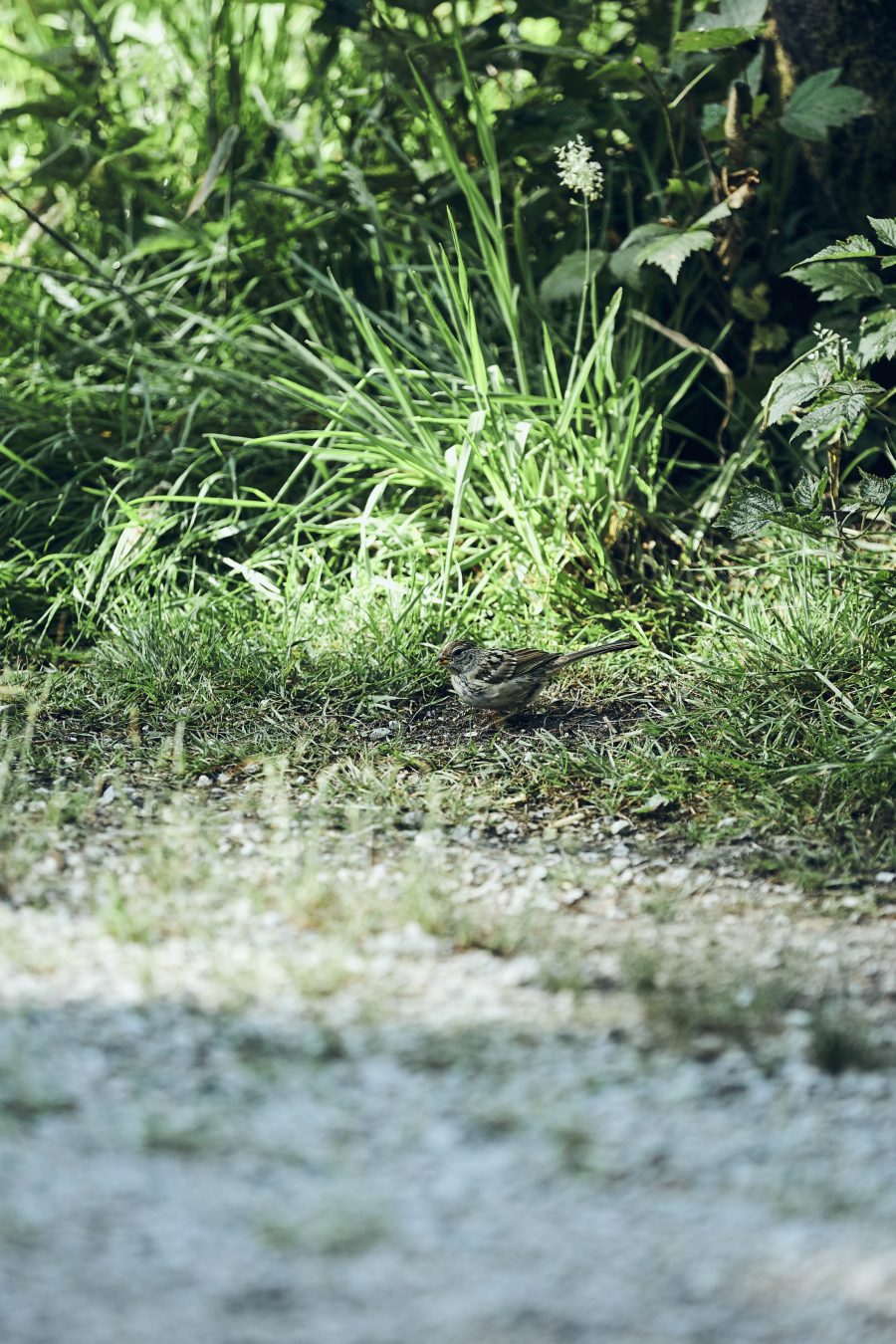 Like Stanley Park, the Reifel refuge’s diverse ecosystem attracts varied species year-round: along the trails that weave under deciduous canopies, you can find (depending on the season) warblers, woodpeckers, towhees, and chickadees making their homes. Impressive crowds of hungry Canada geese, wood ducks, and mallards wait at nearly every turn, presuming that each human has seed ready for gifting.

From the top of the sanctuary’s lookout tower, hollow-boned house sparrows and red-winged blackbirds soar with inimitable grace before the equally impressive Strait of Georgia, a view that reaches as far south as Roberts Bank and as far north as Cypress Mountain. Along the dykes that preserve the sanctuary’s ponds, insectivorous barn and tree swallows dive for hovering mosquitoes, and the resident family of sandhill cranes, a local rarity, can often be spotted loitering on the water’s muddy islands looking for insects. 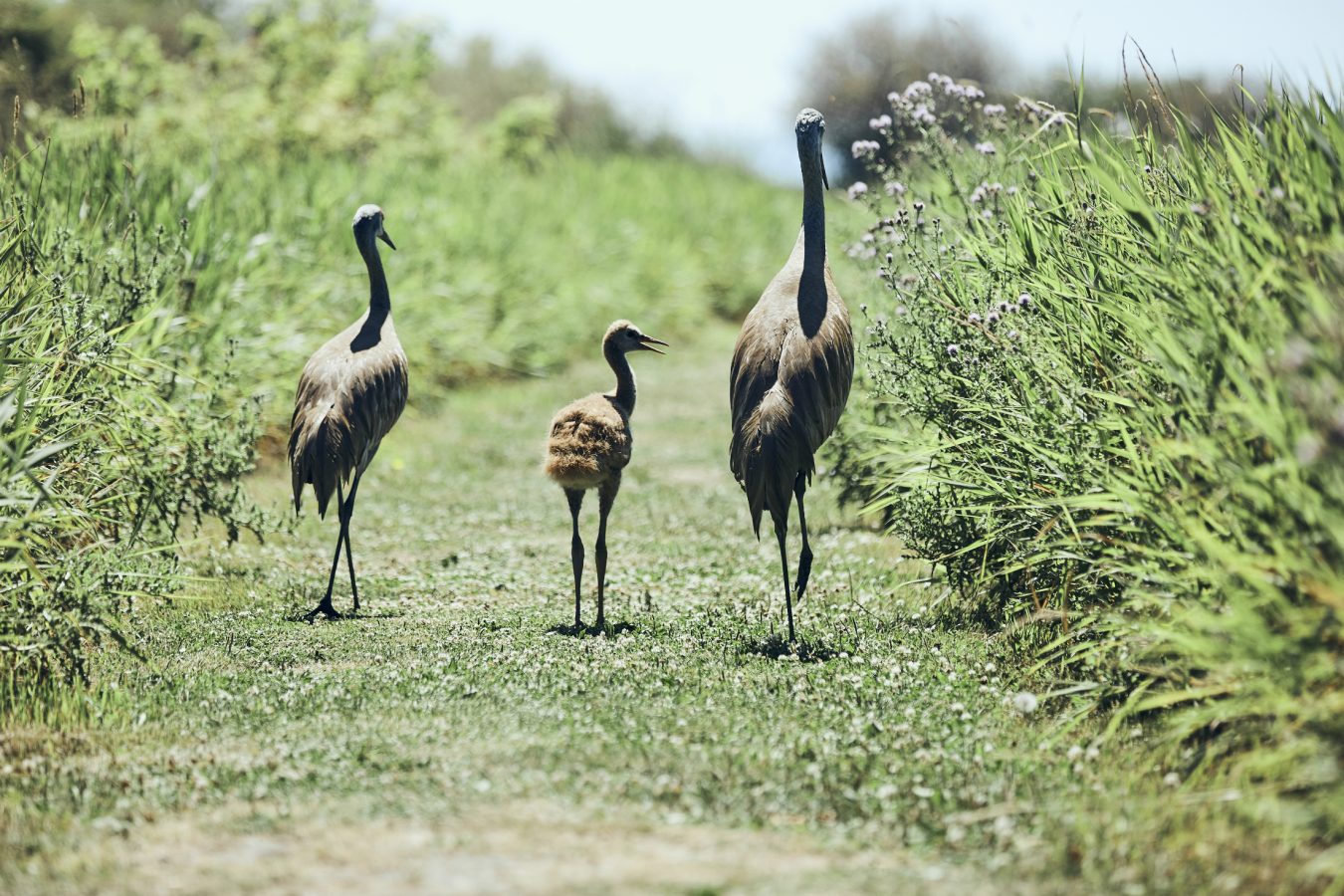 The resident sandhill crane family at the Reifel Refuge.

“Blackie Spit has a long-billed curlew, which is never in Vancouver, but one lives there,” she explains. “It’s a threatened shorebird, but three marbled godwits, which are normally in Vancouver, live with him. They’re different species but they live together. It’s a real oddity.” Relationships can be complicated, even in the natural world.

It’s important, of course, for people to observe the common rules of responsible birding: stick to the path in order to preserve the animals’ habitats; don’t overuse playbacks of birdsongs to attract them; do not feed them unless given permission by a sanctuary (and then, only feed them designated birdseed); and never use flash photography on owls.

Lower Mainland bird nerds (and novices) congregate every summer at the Vancouver International Bird Festival, which in 2018 coincided with the 27th International Ornithological Congress, hosted here. The festival offered educational workshops and nature walks, which provided a great opportunity to get familiar with eBird: an app that allows users to document local sightings, thus providing biologists with useful information. 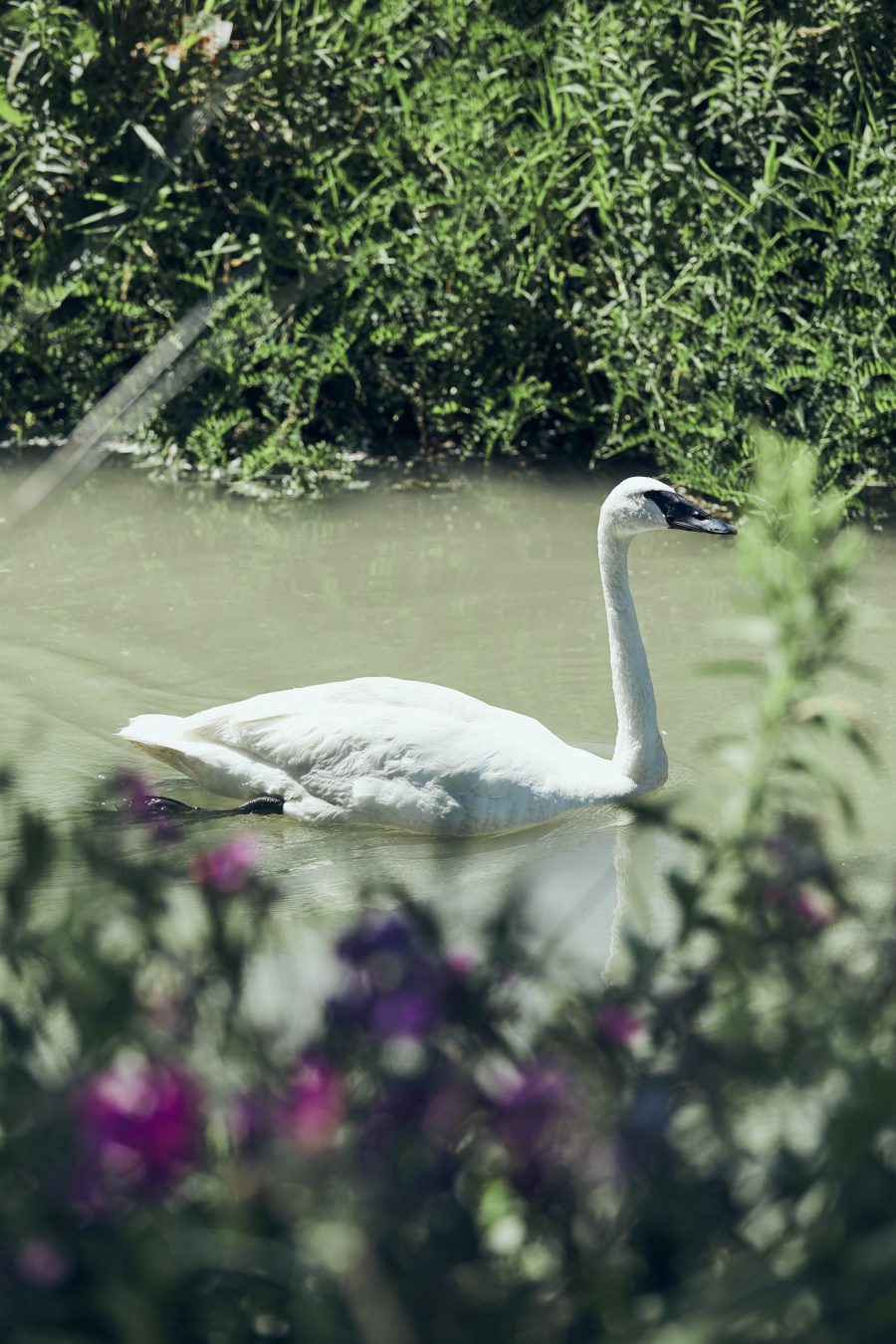 A lone trumpeter swan, rehabilitating at the Reifel refuge before joining his flock in the Yukon.

Birdwatching can also serve as a gateway to greater environmental preservation. “It gets people a little more connected to their surroundings,” Mikkelsen says. “The first step to conserving a place like this is if people care about it.”

From the deprecating meme humour that reminds us we’re more capable of naming brands than plants and animals, to the very real assertion by biologist Robin Wall Kimmerer that the average person can identify the names of less than 10 plants (including the pseudo category “Christmas Tree”), birdwatching might act as a potent solution to our growing sense of alienation from the natural world. Or, perhaps it simply offers a temporary silence, an opportunity to stop overthinking and just be.

This article from our archives was originally published on August 5, 2018, and updated on May 12, 2021. Stay engaged in the Community.