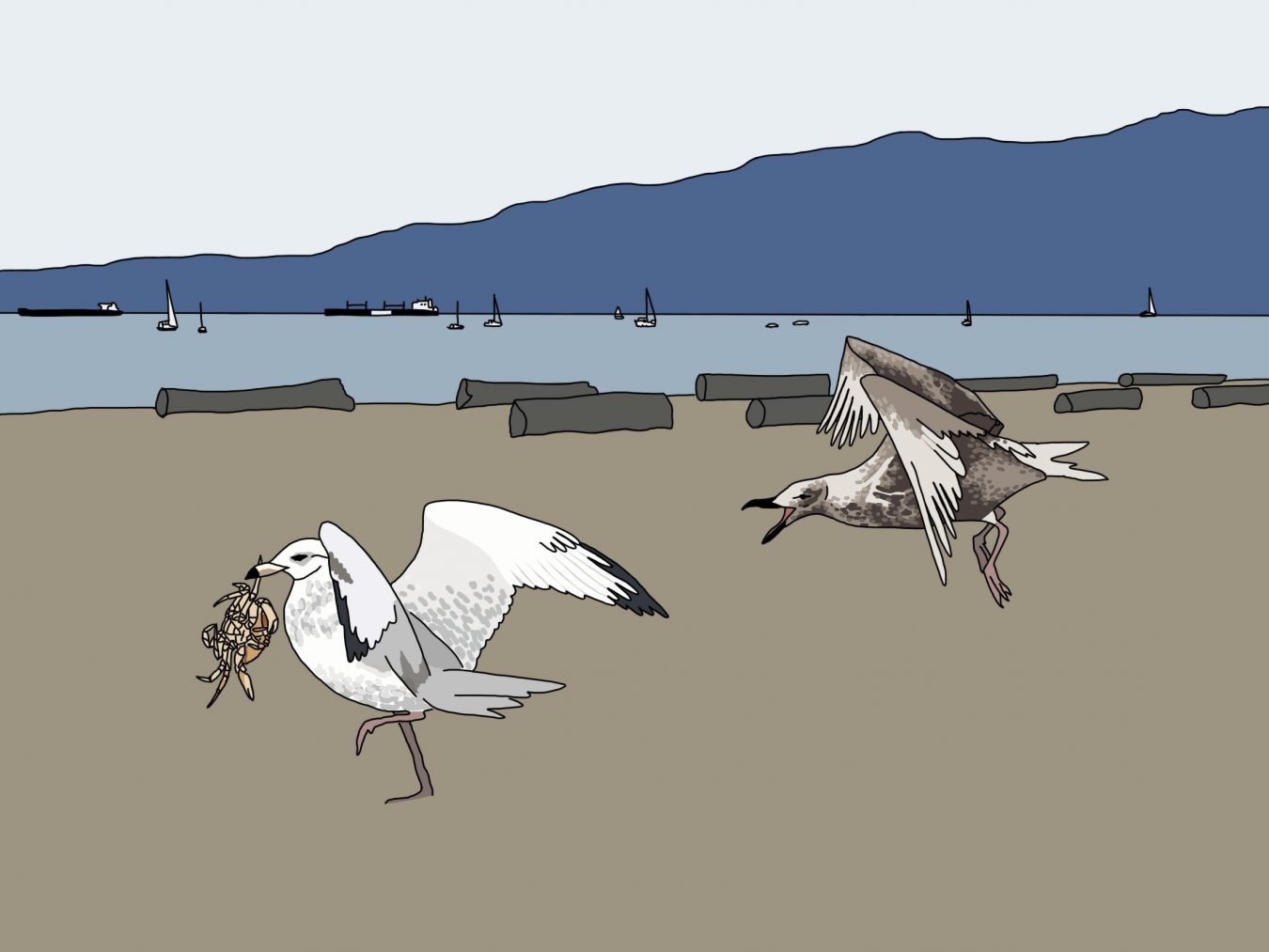 I sit against a log on Kitsilano Beach reading Salt Water Amnesia, Jeffrey Skinner’s book of poems. In “Many Worlds,” he writes: “A physicist proposes time does not exist, only an infinite number of dramas, grand or banal, in different locations: … Nancy nicks her thumb chopping arugula in Manhattan. Sheets of rain batter the empty head of a seagull hunkered down amid blonde grasses.” I share my log with a gull, who eyes me sideways—wondering, perhaps, if Salt Water Amnesia is edible. Kits Beach is full of little dramas, especially for these gulls: they pester those who’ve set up a romantic picnic; they demand a piece of one’s to-go pad Thai; they shriek as they fight over dead crabs. Yet ironically, gulls are featured as serene birds in countless poems, including those by Hilda Doolittle, Winifred Bryher, Power Dalton, and Neil Weiss.

As I did with crows in East Vancouver, it seemed only natural that I close-read these beach gulls and their theatrics through an in-depth character analysis.

What Are the Character’s Thoughts?

It might be safe for me to assume that gulls are commonly thought of as bird-brained, but the reality is that they are actually quite clever. They have, for example, developed cunning ways to get food: if a gull drops a mollusk onto the rocky beach, it’s rightly thinking the impact will break the snack open; if one stomps around on the grass during an outdoor yoga class, the bird is thinking about how the sound mimics rain and will trick earthworms to come to the surface; and if one tries to swallow a starfish whole, it’s most likely thinking (aware that it doesn’t have teeth), “This is my only option.”

What Are the Character’s Actions?

While there is a species of gull on every continent—some specialized to wetland, agricultural, urban, or rural habitats—the gulls of Kits Beach act in accordance to the seaside. This doesn’t make them seagulls, though; “seagull” is a misnomer, potentially sparked by Irish and Celtic mythology, in which Manannan Mac Lir, god of the sea, was often portrayed as a gull.

It seems that Kits gulls think with their stomachs. They are opportunistic feeders, meaning they will try to eat anything—including pigeons, my fries from the concession, plastic, and, if they’re hungry enough, their own chicks. These gulls prefer fish, but with the ocean’s increasing mercury levels and decreasing fish populations, they are forced to look elsewhere. They also prefer to drink fresh water, but they’ll drink saltwater if they must; a pair of glands above their eyes screens electrolyte and ion levels in their blood. And, being specialized to that liminal space where land meets sea, they have a certain freedom: if the ocean isn’t providing fish or crabs, gulls will head to the beach; if beachgoers are reluctant to share their vegan cheese spreads, the gulls will head back to the water.

What Does the Character Say?

From my log, all I hear are loud shrieks. But these rather annoying sounds are part of a high range of calls that the gull combines with postures to communicate. For example, its choking motion—that series of meme-worthy positions where a gull bends its neck forwards and then dramatically backwards while screeching—communicates a male’s sexual availability and is also a signal of boundary conflicts. One upright posture signals a gull’s teeming hostility, but it will usually dissolve into a withdrawal.

Biologist N. Tinbergen notes that a gull’s posture frequently bounces between signs of aggression and retreat; this is the bird’s near-permanent internal conflict between its fight or flight instincts. These actions have over time become ritualized, prolonged, and rhythmic. In other words, gulls perform to communicate.

The riff between the lived experience and the literary romanticism of beach gulls may be thanks to the fact that in Vancouver, we use these spaces of land and sea for our own escapes. A day at Kits momentarily suspends whatever issues await us at home, but since the beach is also the gulls’ habitat, they tend to jeopardize the peace.

Just as their postures have taken ritualistic or emblematic importance, the birds themselves have turned into symbols in the creative imagination of the tranquil shoreline. They’ve come to represent the ability to freely traverse the boundaries of their dramas—something we, perhaps, might even slightly envy.

This essay from our archives was originally published on September 5, 2018. Read Holly Vestad’s character study of East Vancouver’s crows, or more Essays from local writers.