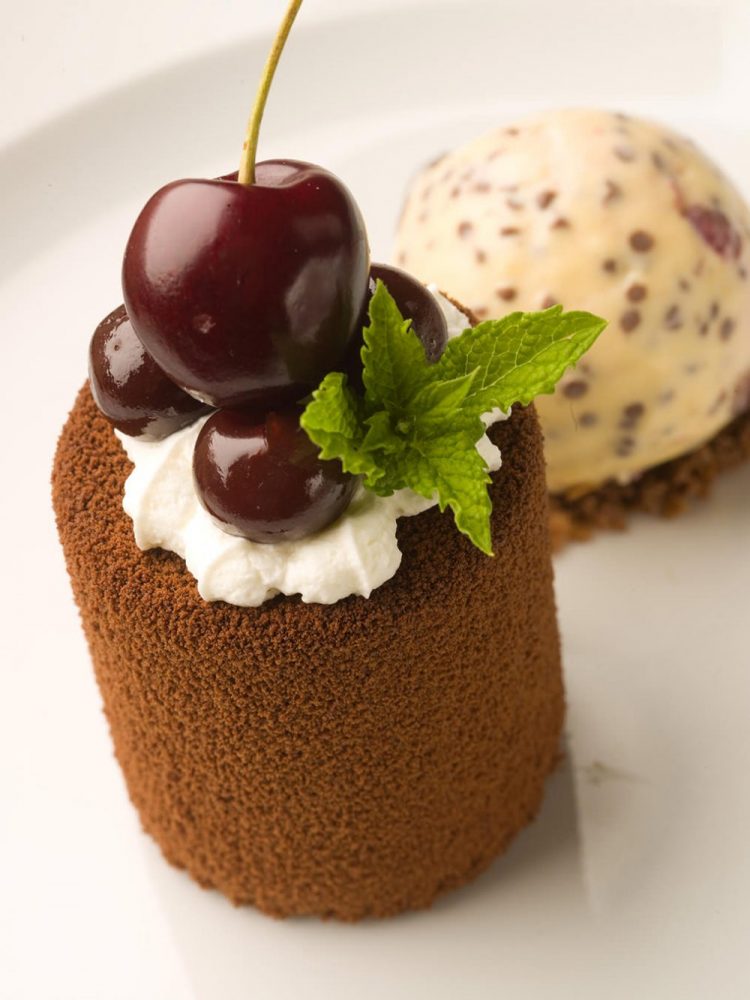 At Araxi, we make individual Black Forest cakes using small metal ring moulds and we spray them with melted chocolate loaded into a paint gun to give them a nice finished texture. We have adapted this recipe to make one large cake with a traditional garnish.

Time is of the essence when preparing this cake. Once the mousses are prepared, they start to set rather quickly. The best method is to prepare the dark chocolate mousse first, build the bottom layer of the cake and then proceed with the white chocolate–kirsch mousse and the second layer of the cake. Use gelatin leaves rather than powder for more consistent results.

Fill a large bowl with ice. Place the egg yolks and sugar in another large bowl and whisk by hand until light and creamy. In a large saucepan, combine the cream, milk, vanilla seeds, and vanilla pod. Bring the cream mixture to a boil on medium heat, then remove it from the heat. Slowly pour the cream into the yolk-sugar mixture, stirring constantly.

Pour the custard back into the saucepan. Reduce the heat to medium and cook, stirring constantly with a heat- resistant rubber spatula, until the mixture starts to thicken and coats the back of the spatula, 4 to 6 minutes. Be careful not to boil the custard. Remove from the heat and strain through a fine-mesh sieve into a medium bowl, discarding the solids. Place the bowl of custard into the bowl of ice and allow to cool, stirring occasionally to prevent a skin from forming on top. Cover tightly with plastic wrap and refrigerate for at least 12 hours.

Place the custard in an ice cream maker and churn it according to the manufacturer’s instructions. Fold in the brandied cherries and the chocolate once you remove the ice cream from the machine. Will keep frozen in an air-tight container for up to 4 days. Makes about 4 cups of ice cream.

Combine the egg yolks, cream, and cocoa powder in the bowl of an electric mixer fitted with a paddle attachment. Mix at the lowest speed until the ingredients just come together, about 3 minutes. Increase the speed to medium and process until you have a smooth and lump-free cocoa paste, 2 to 3 minutes. Transfer this paste to a large clean bowl and set aside.

Thoroughly wash and dry the mixer’s bowl and fit with a whisk attachment. Place the egg whites and sugar in the bowl and process at medium speed until the sugar is roughly distributed. Increase to the highest speed and whip the mixture until it forms soft peaks, about 6 minutes.

Using a spatula, fold a third of this meringue into the cocoa paste and mix until smooth. Gently fold in the remaining meringue and mix until fully combined. Divide the cake batter evenly between the 2 pans, using a palette knife to smooth the surface of the cake batter. Bake for 10 minutes, then rotate the cake pans to ensure even cooking and bake for about 5 minutes more, or until the cake springs back when pressed but is still moist. Transfer the pans to wire racks to cool. Remove pans but leave the parchment paper attached to the cakes.

In a small bowl, stir the kirsch into the simple syrup until well mixed. Set aside.

Melt the chocolate in a stainless steel bowl set over a saucepan of gently simmering water. Set aside.

In a second stainless steel bowl, whisk together the egg yolks, sugar and 3 ½ tbsp of the cream. Place this bowl over the saucepan of simmering water and whisk until the mixture is pale yellow and fluffy, about 5 minutes. Remove the bowl from the heat and stir in the melted chocolate. Allow this chocolate mixture to cool to room temperature.

In the bowl of an electric mixer fitted with a whisk attachment, whip the remaining cream at medium speed until it forms soft peaks, about 5 minutes. Using a spatula, fold half of the whipped cream into the chocolate mixture. Gently fold in the remaining whipped cream, ensuring that the mousse is fully mixed. Spoon the mousse into a piping bag fitted with a wide nozzle.

Melt the white chocolate in a stainless steel bowl over a saucepan of gently simmering water. Set aside. Place the gelatin in a small bowl and add enough cold water to cover the leaves completely. Allow to soak for 3 minutes.

Combine the sugar, the vanilla and ½ cup of the cream in a small saucepan. Bring the mixture to a boil on medium heat until the sugar dissolves, about 3 minutes. Remove gelatin from the water, squeezing out any excess water, and place the leaves in a large bowl. Carefully pour the hot cream mixture over the gelatin, whisking to completely dissolve it. Stir in the melted white chocolate and whisk in the kirsch. Allow to cool to room temperature.

In the bowl of an electric mixer fitted with a whisk attachment, whip the remaining cream at medium speed until it forms soft peaks, about 4 minutes. Using a spatula, fold a third of the whipped cream into the chocolate mixture. Gently fold in the remaining whipped cream, ensuring that the mousse is fully mixed. Spoon the mousse into a piping bag fitted with a wide nozzle.

Combine the cream, sugar and vanilla in the bowl of an electric mixer fitted with a whisk attachment. Beat at medium speed for 4 minutes, or until the cream forms stiff peaks.

Lightly grease and line a deep 10-inch/25-cm spring form pan with parchment paper. Place one of the cakes in the pan and brush it with half of the kirsch syrup. Pipe the dark chocolate mousse on top of the cake and use a palette knife to spread it into an even layer. Sprinkle 1 cup of the brandied cherries evenly over the mousse. Set the second cake on top, pressing it down firmly. Pour the remaining half of the kirsch syrup over the second cake. Pipe half of the white chocolate–kirsch mousse onto the cake, cover it with another 1 cup/240 mL of the brandied cherries, then top it with the remaining white chocolate mousse. Smooth the surface, then refrigerate the cake for at least 8 hours.

Fill a small bowl with hot water. Dip a sharp knife in the water, then wipe it with a towel before each slice to ensure a clean cut. Slice the Black Forest Cake into 10 or 12 slices. Serve each slice with a scoop of brandied-cherry ice cream topped with a few brandied cherries.

Good choices include LBV port, Banyuls, or some PX sherry.