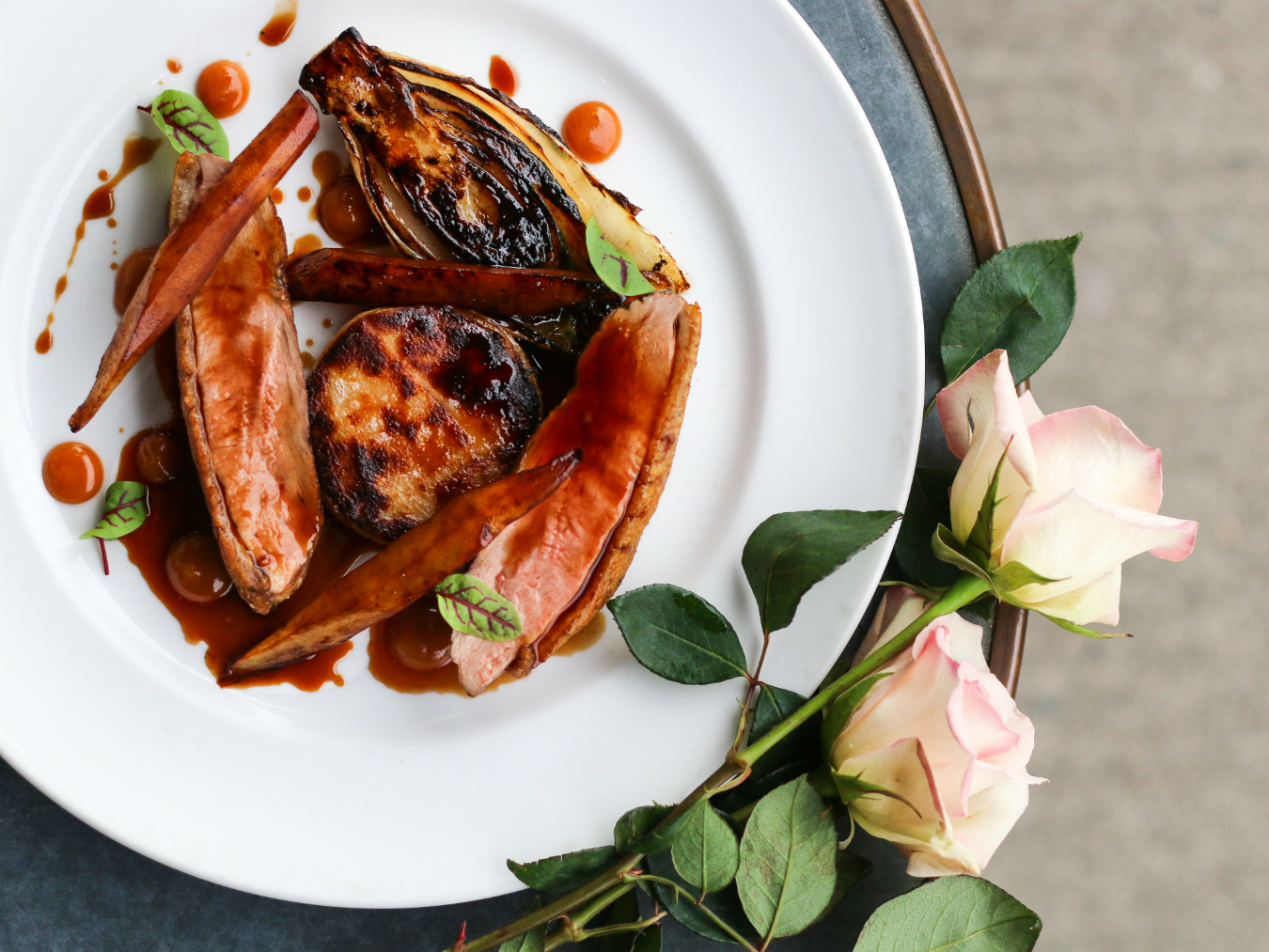 Magret de canard is a comforting French dish typically made from the breasts of ducks that have been raised for foie gras. My take on it is inspired by the classical preparation of duck a l’orange, using traditional French flavour profiles but executed in a modern way. At this time of year I like to serve it with dauphinoise potato and rutabaga, however it could easily be replaced with buttery mashed potatoes if you’re pressed for time. This dish is new on our dinner menu at Au Comptoir, but we’re offering a similar preparation for our special four-course Valentine’s Day dinner service on Feb. 14, 2017 that comes served with celeriac and coffee purée, and compressed and roasted winter vegetables.

Here is how to make it at home.

In a small saucepan set to low heat, gently warm the cream, salt, garlic, thyme, and black peppercorn. Allow to gently simmer for 10 minutes to infuse the flavours. Strain off to remove any larger chunks, then set aside and keep warm.

In an ovenproof dish, carefully layer potatoes and rutabaga in a pinwheel pattern. After every two layers, add a small amount of cream and a sprinkle of gruyere (be sure to reserve half the cheese for finishing). Repeat until all the potatoes and rutabaga have been layered. Sprinkle the remaining gruyere over top.

Place your dauphinoise on a sheet pan to catch any bubbling cream or cheese, and bake in the oven for one to two hours (cooking time will vary greatly depending on the size of your dish, so test doneness with a butter knife—it should slide in and out without any resistance). Once the potatoes and rutabaga are cooked through, switch your oven setting to broil and allow the top layer of cheese to crisp until it turns a deep golden-brown colour. Allow to cool and cut into four portions for plating later.

Make two cuts in the oranges from top to bottom, but not completely through so they still hold together (leave one centimetre at the bottom). You should be left with a quartered orange that’s connected at the base.

In a medium saucepan, cover the oranges in cold water and bring to a boil. Keep at a boil for five minutes then strain off. Repeat this process seven more times, and on the final time allow the oranges to boil for 30 minutes before straining off.

In another saucepan, combine the sugar and water and bring to a boil. Create a caramel sauce by allowing the mixture to continue cooking on medium heat until nicely reduced and a deep mahogany caramel colour has been achieved. The sauce should reach a temperature of about 180 degrees Celsius. Turn off heat and add sherry vinegar. Allow the vinegar to reduce by two-thirds, then add orange juice (the sauce will become thick again). Bring back to a boil and reduce the orange juice by two-thirds.

In a good blender, combine the sauce with the blanched oranges and puree until smooth. Pass through a fine sieve and set aside.

Clean any silver skin and excess fat from the duck breasts, reserving a slight overhang of fat (this will help protect it from direct heat while you render the fat).

Using a sharp knife, gently slice the skin from side to side (leaving about two millimetres between cuts) down the whole length of the breast. Be careful not to completely pierce through the skin.

Heat a large heavy-bottomed pan on low heat. Season the pan with salt and place duck breasts skin-side down. Season the flesh side with kosher salt.

After about five minutes, some fat will begin to collect in the pan. Allow the duck to cook for a few more minutes in the fat. Every five minutes, tip the fat off into a jar so the duck can continue to cook in a mostly dry pan (set the rendered fat aside for a later use). Rotate the duck breasts within the pan (keep them skin-side down) to ensure even rendering and cooking.

Allow the breasts to continue cooking from the residual heat, moving them around the pan to ensure contact is made with all parts of the flesh for a few minutes.

Place on a cooling rack for 10 minutes in a warm place, and allow to rest.

Remove the base of the endive (where it has begun to oxidize) and split lengthwise. Season the inside with salt.

Heat a heavy-bottomed pan on medium-high heat, and add roughly two tablespoons of the rendered duck fat. Place endives cut-side down in the pan. Once they begin to colour, add the butter and honey. Continue to cook, creating a rich caramel in the pan. Once the endives have been seared to a nice dark brown colour on one side, remove from heat and turn over.

Preheat oven to 350 degrees Fahrenheit. Place the four cut portions of the dauphinoise in a pan with parchment paper and butter until warm.

Place the dauphinoise on the plate, followed by the caramelized endives, then the carved duck breasts. Using a squeeze bottle, get artistic and dot the burnt orange puree randomly around the duck. Enjoy with a loved one!

Make it at home: get more recipes here.