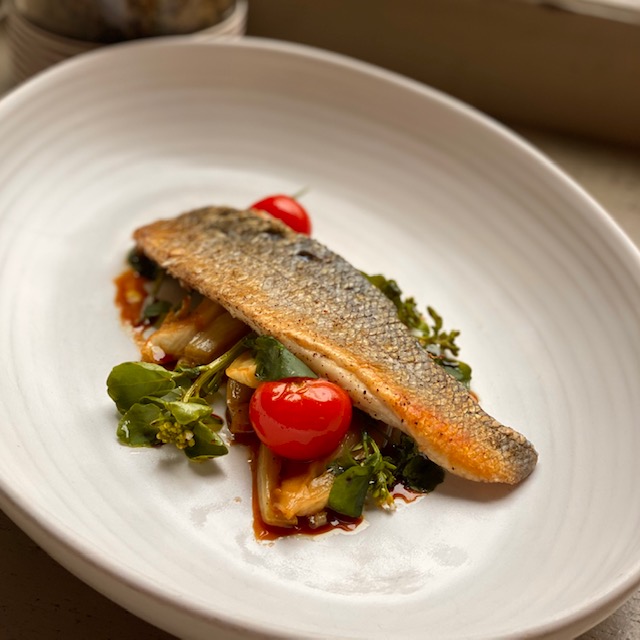 My sons are moaning again, but at least this time it’s with joy. “This is amazing,” my 22-year-old gushes, as his younger brother (16), busy grabbing forkfuls of fish and fennel, nods his agreement. I can’t take too much credit. Sure, I got the branzino’s skin crisp, and the fennel is caramelized, not burnt, but I was guided every step of the way by a professional.

I’m taking an online cooking class with the Dirty Apron in collaboration with the local branch of the Italian Chamber of Commerce. David Robertson, chef and owner of the Vancouver cooking school, is at ease as a web teacher and host, having (sadly) had ample time to hone his Zoom technique over the past year. There have been upsides to the enforced virtual timetable: “We couldn’t have a hundred participants in a regular class,” he points out, noting he has had folks eager to elevate their kitchen skills join from all around the world, “even from New Zealand!”

This class is no different, with my screen allowing me glimpses of kitchens from all over, as my fellow students mirror the way Robertson holds his knife to slice garlic into slivers, and hold up their skillets to the camera to receive approving critiques from the chef. There is discussion of less common ingredients—saba (sticky, cooked down grape must), calamansi (the citrus hybrid Chef favours in his vinaigrette, morels (he prefers to reconstitute this mushroom variety from dried)—as well as tips on knife work, kitchen safety, and how to pre-prep the dishes if you find yourself cooking for a larger group at home once life returns to normal.

I would not call myself an inexperienced home cook, but there are certain things I avoid because the timing is so critical. Fish is one of those things. I cook a lot of salmon and know my way around mussels and clams, but I tend to leave the rest to the professionals. Branzino (or European bass) ranks with sablefish as one of my favourite fish to eat. Before I moved from the U.K. I would order it pretty much anytime it showed up on a menu. It doesn’t feature often in Vancouver, so I was excited to be cooking (and eating) it.

Chef offers lots of helpful tips during the lesson—one of the best for not tearing the skin was, to leave the fish until it’s happy to be moved—the skin will naturally crisp and release from the (very hot) pan.

The main course is veal, a protein I have rarely cooked, and even more rarely cooked successfully. The beautiful bone-in, milk-fed veal chop in front of me is from Cioffi’s. We are instructed to give it plenty of salt and pepper, with a note to be sure the edges receive a shower of salt and pepper to match the top and bottom. The same is to be done when searing, when we are also exhorted to give the Maillard reaction plenty of time, resulting in a deeply caramelized outer crust before the pan goes into the oven to continue cooking.

Of course, it wouldn’t be Italian if there weren’t pasta involved. Once the chop is out of the oven and resting, we get busy making our sauce, cooking down shallots and garlic before adding beef stock and a Barolo wine reduction prepped in advance to save time. While the sauce is simmering, we add the sliced, rehydrated morels and fresh pappardelle pasta that we cooked al dente. A cloud of snowy Parmesan and torn fresh basil leaves finishes things off. The rested veal chop is sliced, and the pasta served alongside.

As I reward myself with a glass of the Rocca Bernarda Friulano that came with the ingredient box, the forks are flying again, and the sounds of approval return. I take a mouthful and join the chorus. This dish is so good, I am already planning when I can get over to Cioffi’s and make it again.

I’m also already eyeing the spot prawn okonomiyaki and macadamia-crusted mahi mahi on the menu of Dirty Apron’s next virtual class. Many people have been inspired to up their cooking and baking during the past year, but I have experienced the opposite, largely losing interest in the kitchen. The degree of deliciousness this Italian cooking evening brought to my plate may have turned that around. My sons live in hope. 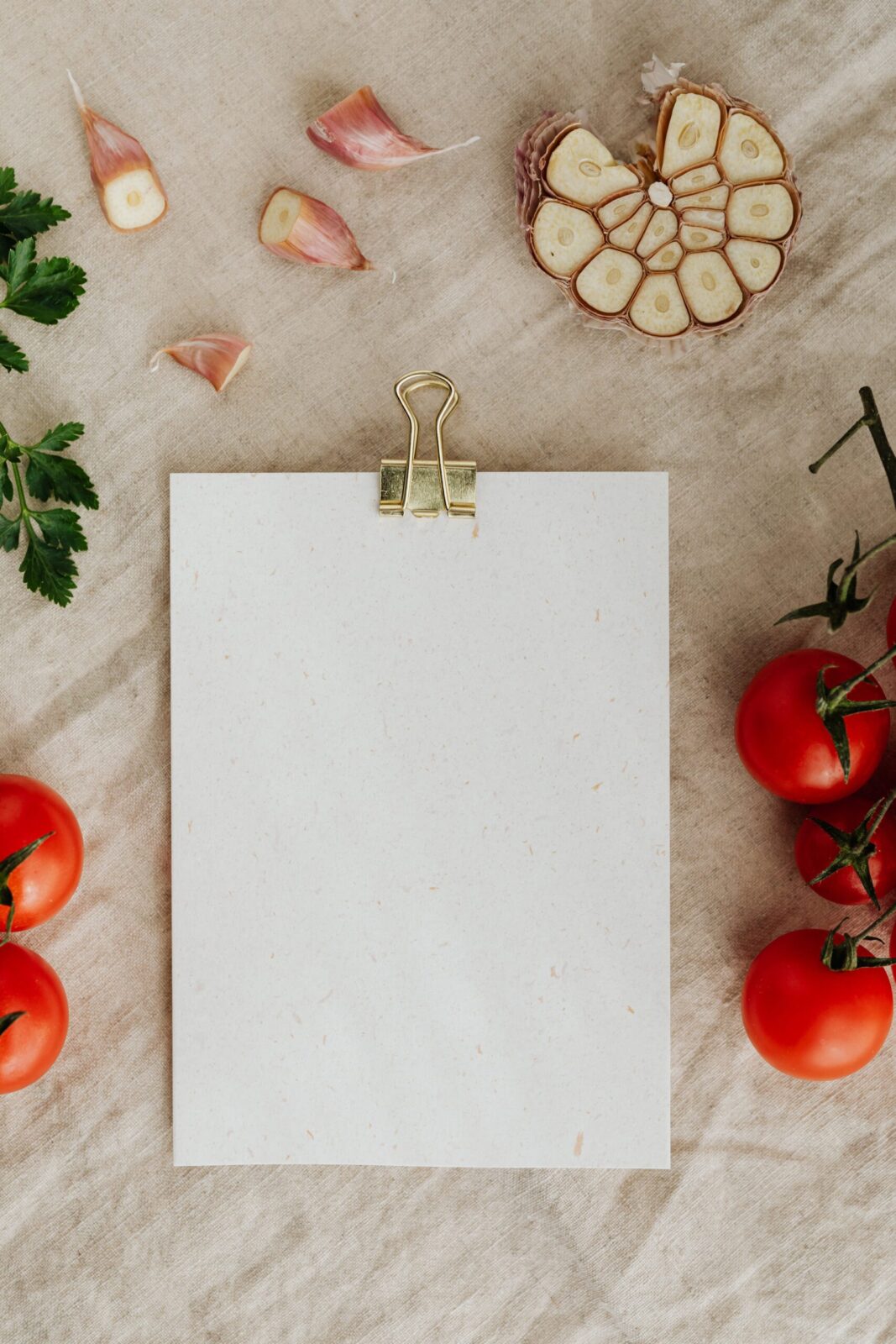 Coat the bottom of a large frying pan with cooking oil and place on medium-high heat.

Once the fish no longer sticks to the pan, slides around easily, and the outer edges of the fillet have turned white, carefully flip the branzino over.

Turn the pan off and squeeze lemon juice over the branzino. Set aside.

In a small mixing bowl, combine all the ingredients and carefully toss together. Season to taste with salt and pepper. Serve alongside crispy-skin branzino, saba and orange caramelized fennel (recipe below), and confit tomatoes.

Coat the bottom of a frying pan with Domenica Fiore olive oil and place on medium-high heat. Add the sliced fennel to the pan and gently sauté for 2–3 minutes. Season with salt and pepper.

Once seasoned, add the maple syrup, sherry vinegar, and orange juice to the pan and toss lightly until the fennel is evenly coated. Bring to a light simmer and cook for an additional 2 minutes, then place the entire pan into the preheated oven for 15 minutes.

Remove from the oven and add the saba to the pan. Gently toss the fennel until coated and adjust the seasoning as necessary. Serve alongside crispy seared branzino (recipe above) and confit tomatoes. 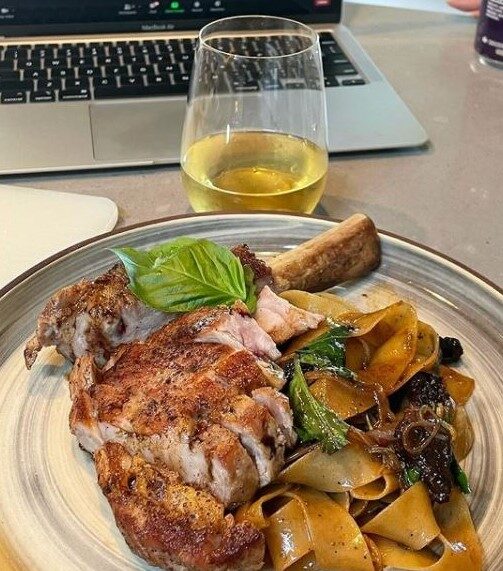 Coat the bottom of a large frying pan with cooking oil and place over high heat.

While the pan is heating, pat the veal dry using a piece of paper towel, then generously season with salt and pepper on both sides.

Once the pan is hot, place the veal chop into the pan and seal on all sides until deeply caramelized. Place the entire pan into the oven.

After 8 minutes, flip the veal chop over and place back in the oven for an additional 8–9 minutes, or until an internal temperature of 140°F–145°F is achieved.

Remove the veal from the oven and place the veal chop on a resting rack. Reserve the pan to the side to make the sauce. Serve alongside white truffle pappardelle, fresh morels, and Barolo reduction (recipes below).

Method
In a small saucepot coated with olive oil over medium heat, sauté the shallot and garlic until soft without browning, about 2 minutes.

Add the Barolo wine and the beef stock, and reduce by half.

Once reduced, season with salt and pepper to taste, then strain through a fine sieve and set aside.

Chef’s note: For the purpose of this recipe, it is important to have freshly made beef stock or bone broth. These can be found at your local butcher or gourmet grocery store in the freezer section.

Method
Fill a large 4-quart saucepot with water and add two big pinches of salt. Cover and place on medium heat. This will be to cook the pasta later.

In the same pan used to cook the veal, add the butter and olive oil, and allow to melt over medium-low heat.

Add the shallot, garlic, and morel mushrooms, and gently cook for 1–2 minutes.

Once the garlic and shallot have softened, add the Barolo reduction and turn the pan to low, setting aside to keep warm.

While the sauce is keeping warm, bring the pot of salted water to a boil and add the pappardelle. Allow to cook for 1–2 minutes, or until desired doneness is achieved.

Once cooked, remove the pasta from the water and add to the saucepan with the morel mushrooms and Barolo reduction. Add the rosemary and basil; grate Parmesan on top. Toss together to coat the pasta evenly, then season with salt and pepper to taste. Serve alongside pan-roasted veal chop.

For the filling: In a large mixing bowl, combine the ricotta, mascarpone, icing sugar, vanilla extract, and ground cinnamon. Mix well until thoroughly combined, then fold in the orange zest. Place the filling into small piping bags and set aside until ready to use.

For the shell: In a medium bowl, sift together the flour, sugar, and baking soda. Work the shortening pieces into the flour with your fingers until the mixture becomes coarse and sandy. Add the cold water and the white wine vinegar, and mix until it becomes a smooth dough. Spread a piece of plastic wrap on a flat surface and place the dough in the centre. Wrap the plastic loosely around it and press the dough to fill the gap. Flattening the dough will mean less rolling later. Let it rest in the fridge for a few minutes.

In a medium pot with a heavy bottom, heat the canola oil to 350°F.

Sift an even layer of flour on a flat surface. Flour a rolling pin. Roll the dough until it is very thin (about 1/8 inch thick). Cut the dough into six pieces. Using any glass or small bowl that has a 3–4-inch diameter, cut rounds, tracing around each one to ensure the dough has been fully cut.

Wrap each circle around a cannoli mould. Use a little bit of water on the edge of each round to seal it shut and to ensure it will not slide or fall off before pressing it closed over the mould.

Using a pair of tongs, hold the edge of the mould as you submerge and fry the shell in the oil until crispy, 2 to 3 minutes. Remove from the oil and, holding the mould in one hand with your tongs, gently grip the shell in your other hand with a kitchen towel and carefully slide it off the mould. Set aside to cool.

Chef’s note: For the purpose of the class, we recommend purchasing cannoli shells from the Cannoli King.