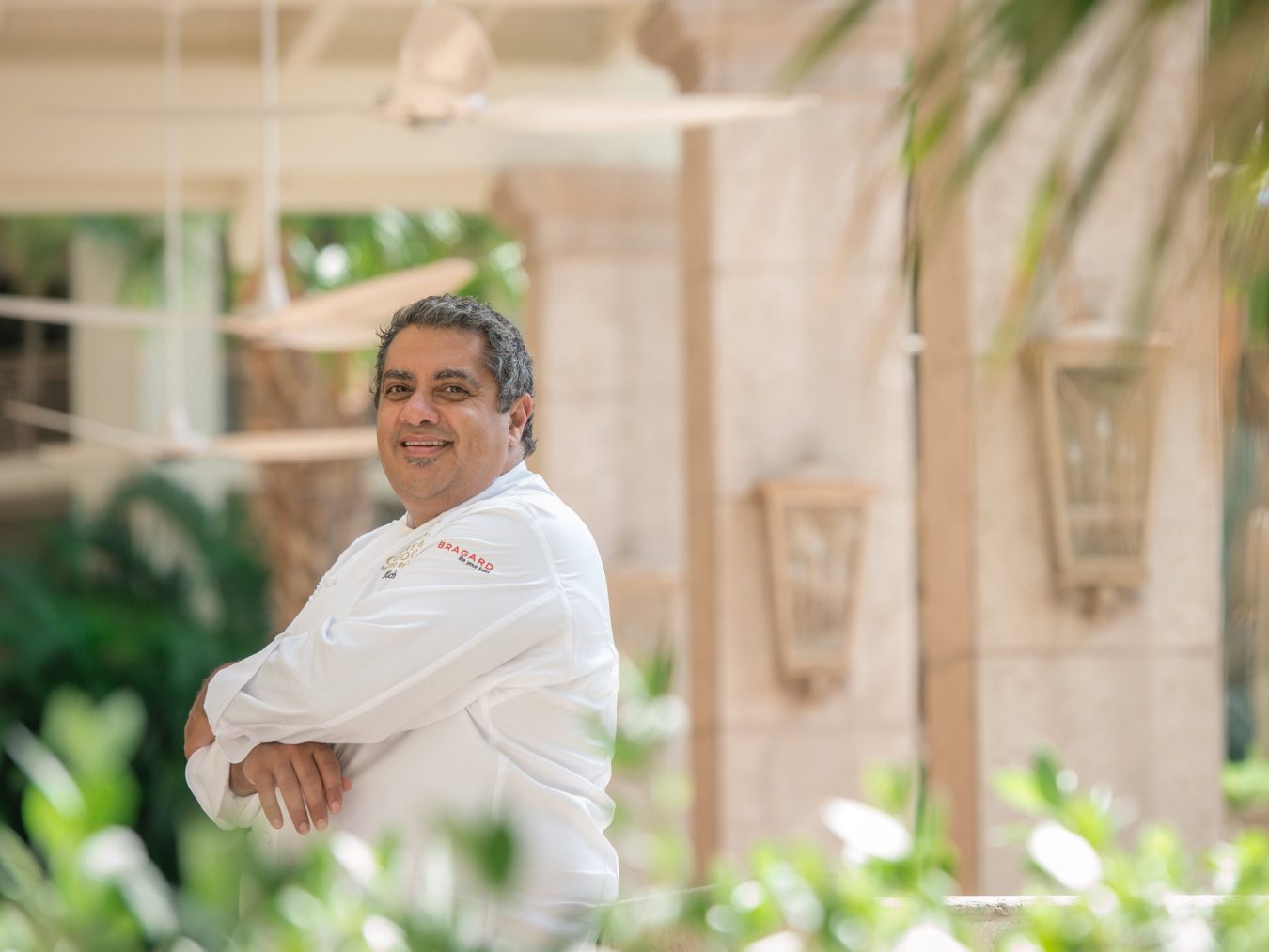 With a flair for culinary collaboration, American celebrity chef Michael Mina is inspired by innovative gastronomy and unwavering passion. As the recipient of many esteemed honours including the James Beard Award, Mina heads the San Francisco-based Mina Group, a powerhouse organization with nearly 30 noteworthy restaurants of varying concepts.

Mina recently participated in 2018’s 10th annual Cayman Cookout, a major Caribbean food and wine event that takes places every January at The Ritz-Carlton on Grand Cayman. Mina was one of several heavy-hitting culinary masters, including Dominique Crenn, Robert Irvine, and Emeril Lagasse (among many others) over a weekend of high-energy demos, galas, and beach bashes.

Despite a busy schedule, Mina took a few minutes to share some insights under The Ritz-Carlton’s palm trees. Undoubtedly, this was a rare moment of relaxation for him, as his company recently opened two new high-profile restaurants: Mina’s Fish House at the Four Seasons Oahu at Ko Olina, and Cal Mare at the Beverly Center in Los Angeles.

Mina’s Fish House on Oahu opened in December 2017. Can you share some highlights about menu?

It’s been amazing. The great thing about having a fish restaurant is that you can use the whole globe, because you don’t have to say it’s Italian, French, Japanese, or Korean—and that’s what always has really attracted me to having a seafood-focused restaurant. In Hawaii, it’s just mind-blowing because of the way the menu is laid out. We have really great composed dishes that have a big “wow” factor. Some of them are from my repertoire, classic dishes from all the way back in my Aqua days [his first restaurant in San Francisco], and some are new.

The restaurant is said to feature an extremely wide variety of fresh fish.

We do a whole menu page of the fish that come in the back door every day. Sometimes we’ll have 15 or 16 different species on the market list. These beautiful, whole fish come in—including fish large enough to feed four people—and we can do several cooking techniques. So, we’ll do whole fish fries; whole broiled fish; wood-broiled fish; whole steamed fish; and wood-grilled fish. That’s really fun because there will be nights when the fish is coming in at five o’clock at night, so during service we will be getting fresh fish in the back door; the fisherman are bringing it right in.

Over the years, what has inspired you the most in your career?

I’m always inspired by travelling, obviously, as it’s always a big help to experience different cuisines. What inspires me the most at this point in my career is collaboration. It’s not all about me. I’m well past that point. For example, we just partnered with chef Adam Sobel at Cal Mare in Beverly Hills. And our Mina’s Test Kitchen [a series of upscale pop-up restaurants with guest chefs] was the biggest collaborative project that we’ve done. In creating that two years ago, we decided to partner with great chefs, create the concept in an incubator style where it’s a little place, and then we turn it into a real restaurant after that. Watching that progression is really rewarding. And that’s what’s inspiring me right now more than anything else.

Do you travel to Canada? What are your thoughts about Canadian cuisine today?

Canada is very much a melting pot. Montreal is just amazing—I was just visiting there recently—and Toronto’s dining scene is very cool, too. Toronto’s level of casual dining is very high; it’s where the U.S. is trying to get to now. Because now you are starting to see a lot more people involved in the more casual concepts, such as Danny Meyer doing Shake Shack and things of that nature. In Toronto, a lot of the fast-casual type of restaurants are really good.

What kind of music do you listen to in the kitchen?

What’s the one item that is always in your fridge at home?

I’d say there are always good tortillas in my refrigerator. That’s our thing at home; we always have tortillas and you can make anything with those. You can add hummus, avocado—anything you want always goes well in a tortilla.