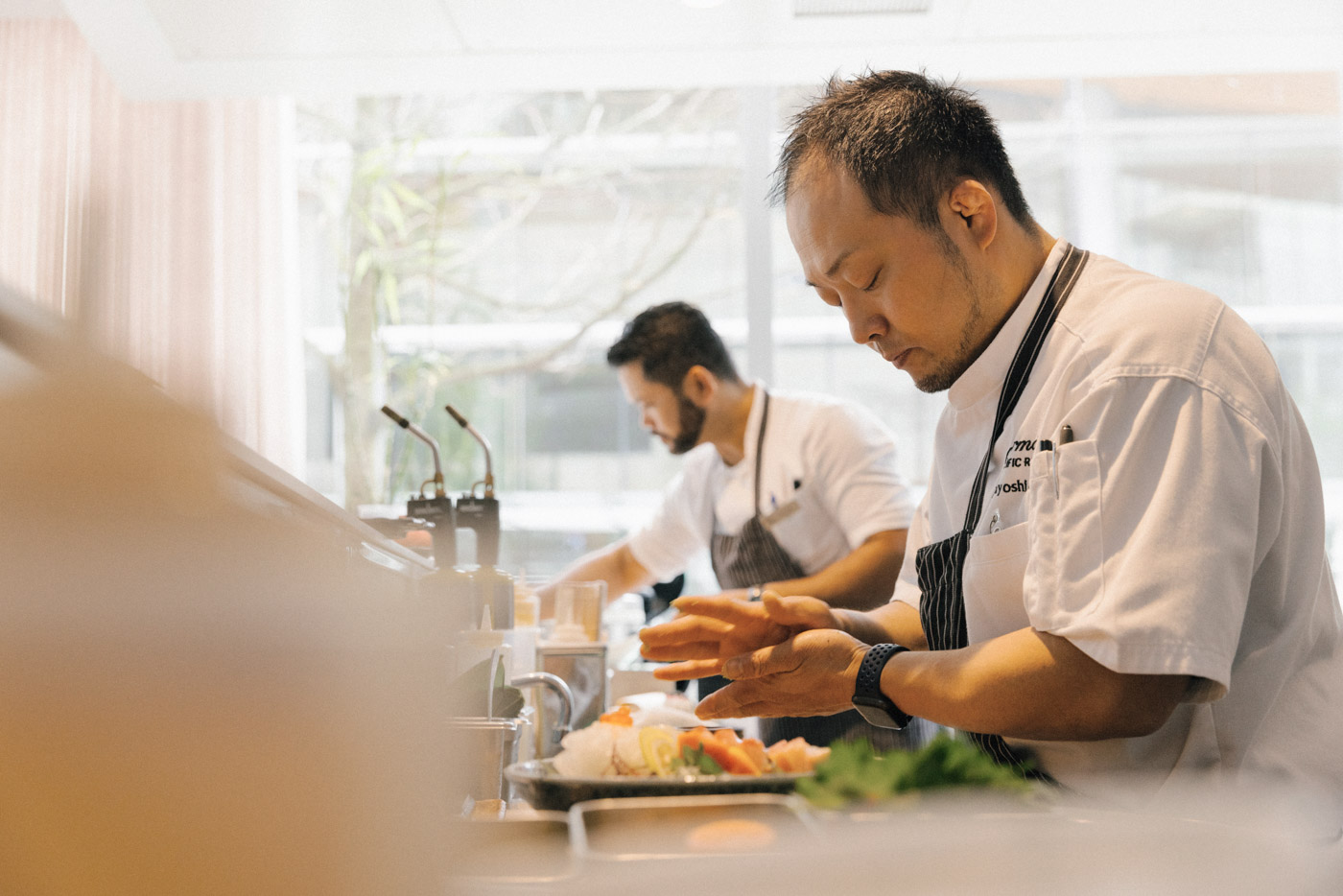 Tucked in a corner of the Fairmont Pacific Rim lobby lounge, chef Masayoshi Baba works quietly and efficiently. When anyone approaches, he looks up from his work, joy lighting his eyes, even as his hands continue to move. He wraps a large piece of buri (yellowtail) in green paper and paper towel before securing the bundle with masking tape. First cook Ferdinand Tolentino stands next to him, respectfully asking him to explain what he’s doing. “I’m drying the fish to age it,” Masayoshi says. Patiently, he explains how, in a few days, the flavour of the fish will intensify. Tolentino nods.

Since August, Masayoshi has taken charge of the lunchtime omakase and the all-day nigiri program at the raw bar as its consulting head sushi chef. During the day, he trains staff and works at the Fairmont Pacific Rim before rushing off to his namesake (and newly Michelin-starred) restaurant on Fraser Street for the dinner service. Masayoshi chuckles over how busy he is, but he relishes the challenge, particularly mentoring up-and-coming sushi chefs. 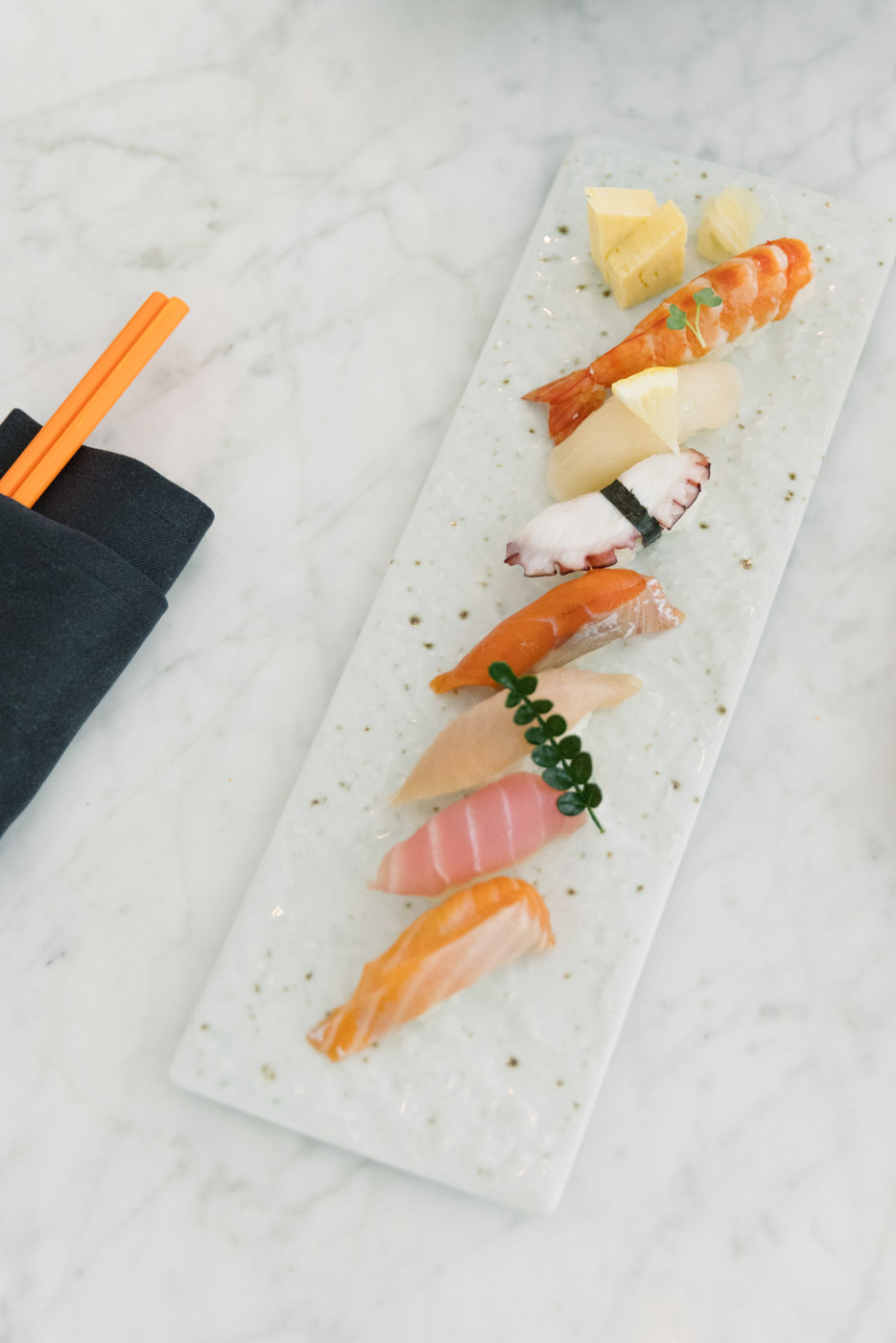 Masayoshi’s own apprenticeship began in Japan’s Yamaguchi and Fukuoka prefectures where he trained under master chefs, perfecting delicate knife work and time-honoured treatment of seafood. “When I was in Japan, I used to ask for recipes in detail so many times, so I could create the same dish myself,” he says. He worked with fugu (blowfish), painstakingly separating the flesh from the potentially lethal skin and organs. He mastered how to clean and break down suppon (soft-shelled turtle), once served to emperors and purported to boost virility. He also learned artistry, such as transforming a blowfish into a striking lantern.

When he was 25 years old, Masayoshi set off for Vancouver, intent on honing his talent. He found a new mentor in chef Hidekazu Tojo, who, over the course of a decade, taught Masayoshi about both Japanese cuisine and life itself. Tojo’s impact was so profound that he picked Masayoshi’s daughter’s middle name. Under Tojo, Masayoshi discovered the pleasures of interacting with customers at the sushi bar. “To encounter a style of omakase where you create an original dish made from local ingredients based on each customer’s preference was really shocking, but I found it really innovative,” says Masayoshi. Encouraged to cultivate his creativity, he broke from rigid recipes, focusing instead on the quality of each ingredient and inventive ways to use it.

Tolentino, who first made sushi at Coast Restaurant, started learning in earnest when chef Taka Omi took him under his wing at the Pacific Rim raw bar and later at Taka’s shop, Sashimiya. “I love learning about fish. A lot of the Japanese way of cutting fish is different from a Western style of butchery. Slicing fish is an art,” Tolentino says. Omi schooled Tolentino in the traditional techniques involved in nigiri and sashimi, stripping them to their essentials: respect for ingredients and skilled artistry. Tolentino learned how to use a very sharp knife, cutting gently against the direction of the scales to remove them in a film. In contrast, many non-Japanese chefs use a fish scaler on the skin of a salmon. “The reason why we don’t do that is you bounce on the fish meat a lot, so it damages it from the outside in,” he says. 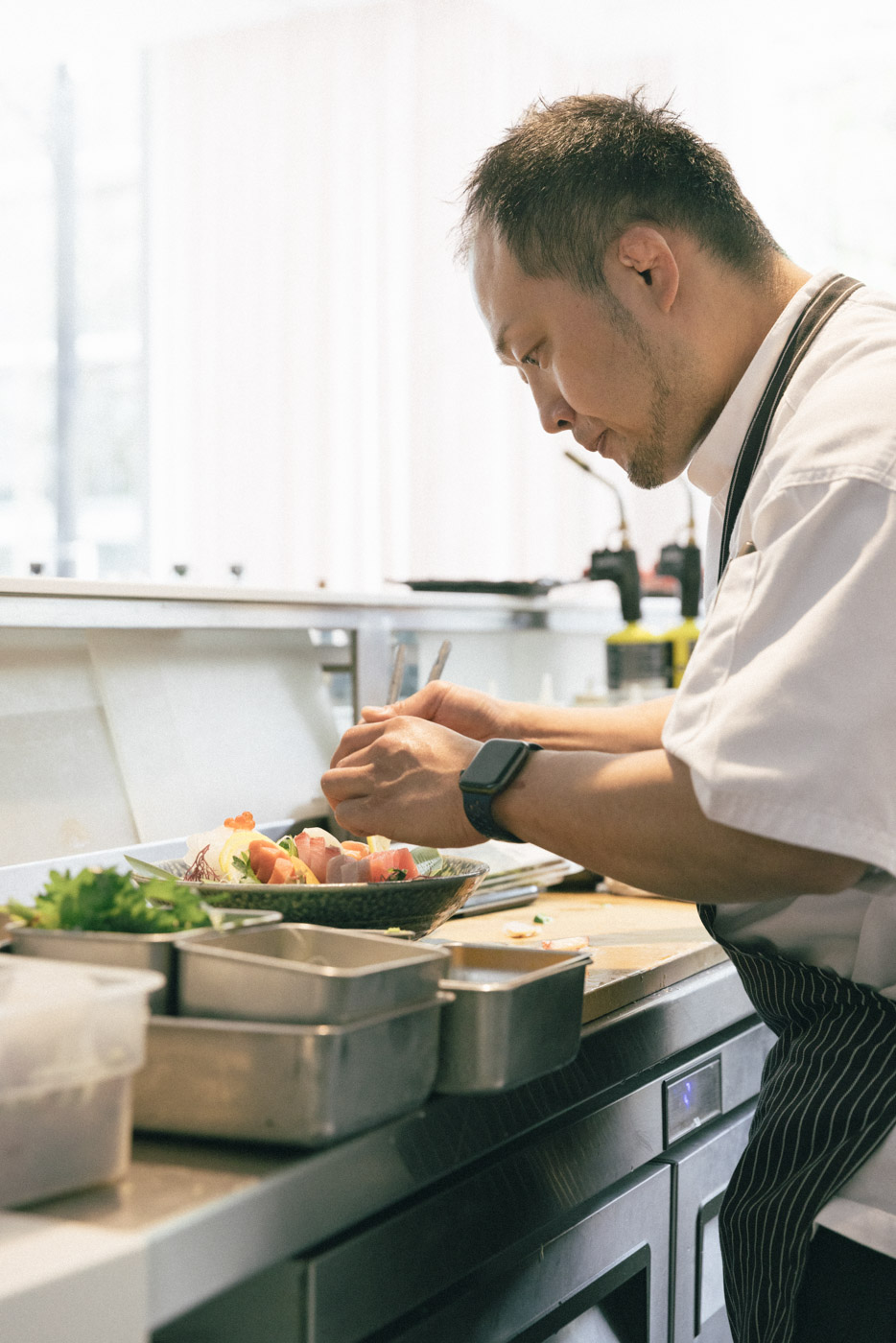 The education has worked both ways; Masayoshi first had to accustom himself to working in a big hotel operation and learn about its Ocean Wise program. Then Masayoshi quickly identified the first skill he could teach the team. “I started out improving the quality of rice, which plays an important role in sushi. Depending on the season and the weather conditions,” he says, “the amount of water, the duration for soaking the rice, and when to drain the water change.” Tolentino is fascinated by how Masayoshi adjusts the ratio of sugar to rice vinegar. On a warm day, when the palate needs refreshing, he ups the acidity, whereas when it’s colder and diners are craving sweet food, he adds more sugar.

Tolentino is absorbing Masayoshi’s encyclopedic knowledge of seafood and specialty Japanese ingredients. He pays attention to each component of the dishes and how they work in concert. “With his sushi, he has a depth of knowledge of taste, of what goes with what. With each nigiri he makes, the garnish complements the fish,” Tolentino says. For example, Masayoshi garnishes hotate (scallops) with a sprinkling of umami-rich kombu salt⁠—an ingredient Tolentino had never encountered⁠—to complement the scallops’ delicate sweetness. Other garnishes, such as chrysanthemum flowers and sea grapes, were equally novel. 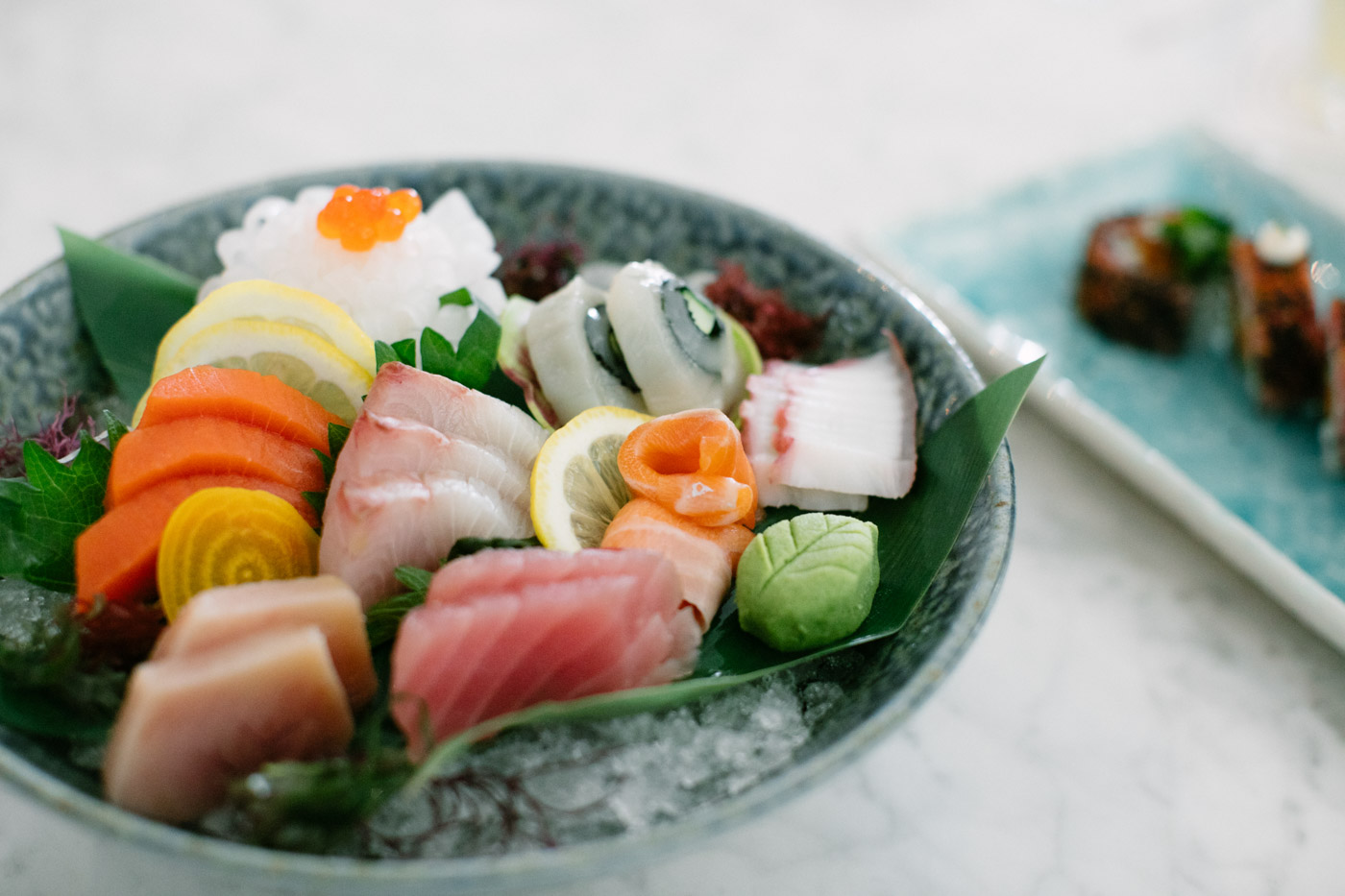 Under Masayoshi’s direction, Tolentino has learned to look forward to opening food deliveries. “I’ve seen a lot of fish from him that I wouldn’t even think of,” he says. Tolentino has learned about nodoguro (rosy seabass) and kasugodai (baby red snapper). “I am hoping to show all kinds of methods as much as I can and recognize the best season and best method for each fish, which can change depending on the season,” says Masayoshi. Tolentino was particularly excited to learn about isaki (chicken grunt), a white fish that Masayoshi sandwiches between two strips of kombu for five hours until it’s infused with the kelp flavour. The flesh takes on an almost bouncy texture due to the seaweed absorbing some of its water content.

Tolentino has also developed a deeper appreciation for impactful plating, such as a small green leaf of kinome that can be eye-popping against a white fish. Masayoshi picks the plate first and then comes up with the dish. During his first visit to the raw bar, he made a beeline for the plates. And when he didn’t find what he was looking for, he went shopping for new serving dishes of all sizes and styles. Even an albacore tuna cone with narazuke (pickled melon) has its own geometric pottery stand.

Beyond the techniques and plating, Masayoshi’s character is the biggest lesson. Tolentino says, “His heart speaks through his food. He came in here with so much respect for me and my team. Even though he’s gone so far ahead of many chefs out there, he has stayed humble.” Through the mentoring he does at the raw bar and at his own restaurant, Masayoshi continues a proud lineage of exemplary sushi chefs. “I hope that the team can acquire my skills as their own, pass them along to other cooks, or use them to create new dishes,” Masayoshi says.