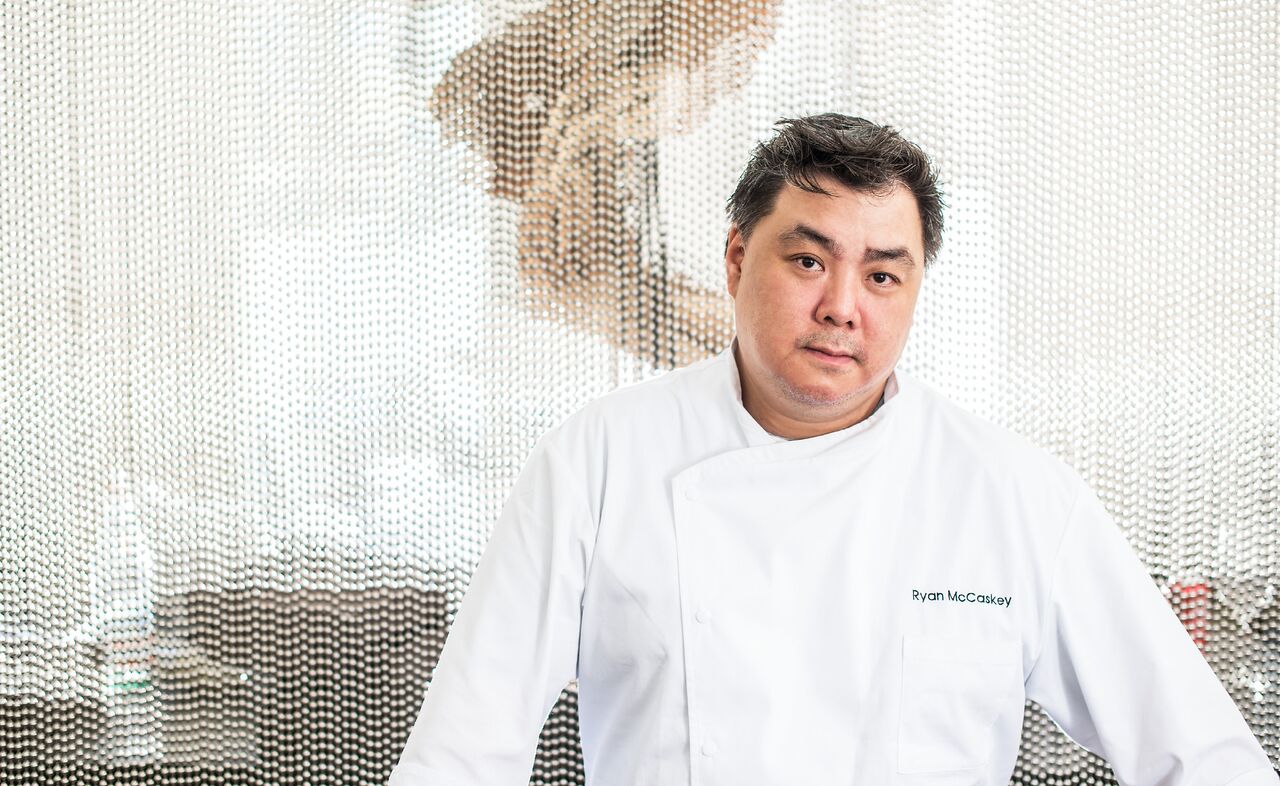 In a dim-lit private dining room at the Fairmont Pacific Rim’s Botanist restaurant, chef Ryan McCaskey is busily typing on his phone. “Two seconds,” he says apologetically. “There’s always something happening back at the other restaurant.”

The other restaurant he is referring to is Acadia, his two-Michelin-starred establishment located in Chicago. As McCaskey rapidly taps away, something becomes clear: his fierce devotion. He is so dedicated to Acadia, in fact, that he lives right across the street from his restaurant, usually clocking in 16- to 18-hour days. “It’s kind of a curse and a blessing,” he says with a smile as he sets down his phone.

Acadia opened in 2011, serving up new American dishes inspired by coastal Maine, and after just 10 months it received its first Michelin star. Three years later, it picked up a second one. “It was pretty incredible,” McCaskey recalls. Still, his focus was never on awards. “It wasn’t a conscious decision,” he continues. “It’s not like we were chasing after stars and accolades.” What he really cares about is the food.

McCaskey is in Vancouver to cook a special one-night-only 2018 Michelin on the Road dinner with Botanist chef Hector Laguna. It is his first time in the city, and although he admits to not knowing too much about Vancouver’s dining scene, he does understand the region’s diverse agriculture and abundance of ingredients from both land and water. “When I was thinking about the menu,” he says, “I wanted to do something that paid homage to the area and what it’s known for.” The result? A seven-course tasting menu (created by McCaskey and Laguna) that fuses together the American East Coast flavours of Acadia and the Pacific Northwest cuisine of Botanist.

The Vietnam-born chef’s introduction to Vancouverites comes in the form of a fresh and clean West Coast oyster paired with shaved cucumber and perfectly crunchy granola, and drizzled with kohlrabi soup. He describes his style of cooking as “contemporary classic,” with roots found in French kitchens. But like the many great chefs who came before him, McCaskey’s culinary personality is always progressing, and he is constantly developing a curiosity for new techniques.

“Yes, my food has a very classic approach, but at the same time, if you look at it, there are some twists here and there that I think are very contemporary or surprising,” he explains. Case in point? A sous vide salmon with an iberico ham consommé, pickled foraged mushrooms, and preserved lemons. For his main protein dish, McCaskey serves a honey-glazed duck that radiates with summertime flair via grilled peaches, Swiss chard “collards,” pickled stems, mustard seeds, and mustard truffle jus. While chef’s signature duck at Acadia is marinated for 19 days, his short amount of preparation time in Vancouver only allowed for three days of infusion here, which admittedly leaves a little something to be desired.

And while the sold-out Botanist dining room is here to see a Michelin chef at work, it is Laguna’s dishes that really get the room talking. A creamy confit tomato gazpacho with artichokes and a hefty amount of buffalo ricotta has diners scraping their bowls, and Northern Divine caviar with potato mousseline, cured egg, and cultivated cream is an utter delight. Each course is fabulously paired with British Columbian wines from the likes of Culmina and Mt. Boucherie, courtesy of Botanist’s wine director Jill Spoor.

Still, young Botanist (which has been open for less than two years) can certainly learn some valuable lessons from McCaskey and Acadia. In its seventh year of operation, Acadia is considered an established powerhouse, a veteran among its peers. “We’re not the cool kids anymore,” McCaskey says with a chuckle. “We’re not the hip, trendy guys. I’m the old guy now.” But with experience comes wisdom, and McCaskey has that. Glimpses of him in the Botanist kitchen show an unbreakable persistence; this is power at work.

He jokingly calls himself a “tired guy,” then quickly interrupts his own assessment. “But so what? We’re always doing stuff new and I think people keep one eye on us all the time, which is great.” Rumour has it Acadia is close to receiving its third Michelin star. There’s no denying that the team continues to push further, but accolades will always come second. “I just want to be at the highest level we can be,” McCaskey declares. And that is true devotion.

Dig into our Food and Drink section.