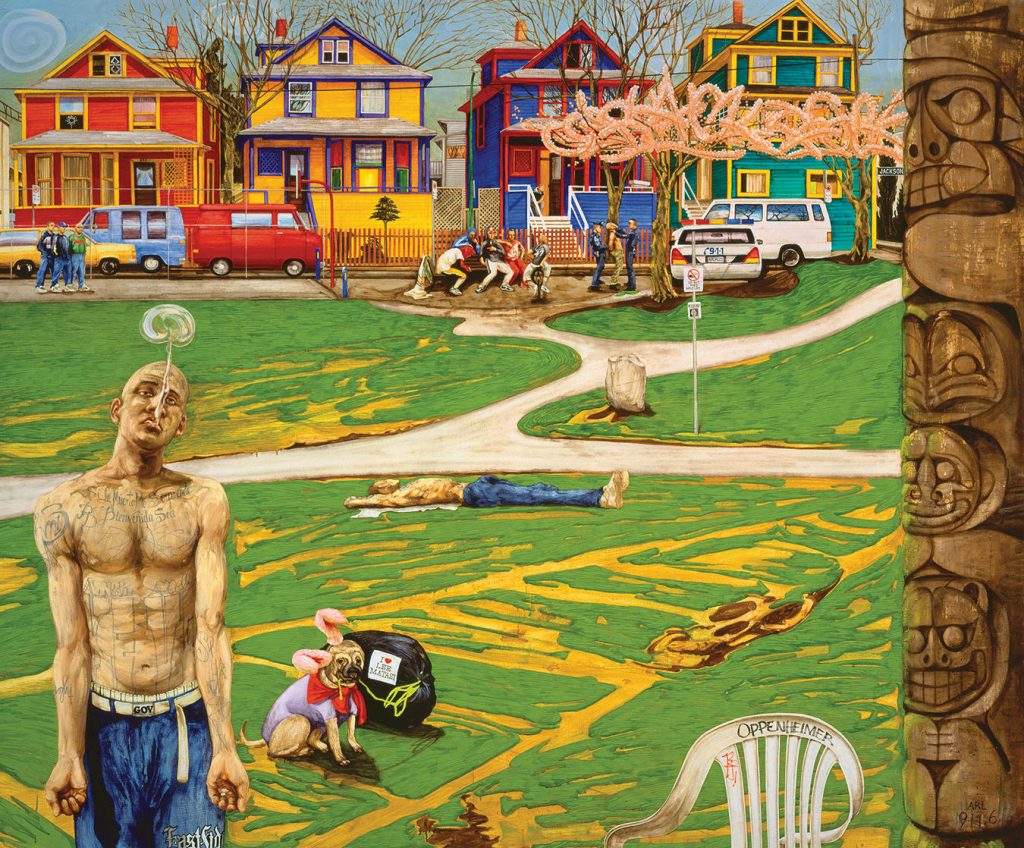 Upon entering the blue door that leads to Vancouver artist Attila Richard Lukacs’s studio, it is hard to know where to look first. There are shelving units more than 3 metres high stuffed with books, newspaper clippings, and the odd dirty paintbrush. In fact, there’s paint everywhere, so much so that I’m directed to the studio’s only paint-free zone: a worn orange couch that, truth be told, looks like it might not be so paint free. Lukacs is at work on a piece, cursing and so engrossed that it takes a few minutes for him to stop and say hello. “Sorry,” he says. “It’s just that I can’t seem to draw a proper circle.” He motions toward a large canvas heavy in composition stage filled with empty, what look like perfect circles, and homoerotic male figures moving from one pose to the next across the bottom.

I decide against the “paint-free” couch and instead settle into the studio’s playground swing as Lukacs lights what will be the first of many cigarettes. The artist is fresh from opening an exhibition at the old A&B Sound on Seymour Street, his first group show in Vancouver since 2003’s wildly popular “The Basement Show”, which reunited Lukacs with Douglas Coupland, Derek Root, Angela Grossmann and Graham Gillmore, all former classmates of his in the early 1980s at Emily Carr Institute of Art and Design (now Emily Carr University). The group became known as the “Young Romantics”, thanks to an exhibition of the same name at the Vancouver Art Gallery that brought the five young artists together after numerous self-curated shows the artists hosted in abandoned warehouses.

Twenty-four years later, Lukacs admits that he and his Young Romantic cohorts still remain friends, but that this latest exhibition (which he reluctantly admits to curating) includes the work of his “BFFs”. Those best friends include Paul Wong, Michael Morris and Ignacio Corral. It’s fitting that Lukacs show this latest work in his hometown; never before has so much of his work focused his city as subject. “This body of work I’m showing right now, I’ve never dealt with Vancouver so much. They should be seen. I’m glad to be able to show them in Vancouver.”

Indeed, Vancouver is glad to have them. Opening night of Lukacs’s guerilla-style show brought 800 people out on a dark and stormy Tuesday in early January. By the end of 2009, the former A&B Sound space will open as one of the most impressive cultural hubs in the city. Plans are to develop the site into a street-level bistro, a high-end restaurant, and a lounge space, with daytime access to two upstairs galleries: the Becker Galleries and the Belkin Satellite.

Like Lukacs, the site’s developer and owner Vincent Alvaro has put together a few shows of his own. Formerly the owner of the now-cult-status club Graceland, and more recently the owner of the live-music venue Richards on Richards, Alvaro knows a thing or two about bringing the people what they want. Michele Becker, who plans on exhibiting two separate “under renovation” shows at the space in its current condition, says that her gallery, once completed, will concentrate on presenting an international mix of artists in varying points of their career, with established artists as guest curators. Becker believes that bringing artists into her curatorial fold will not only give her collectors more confidence in the work, but will also give the work a deeper sense of value. “The beauty of the space,” says Becker, “is that it will provide a venue to show art, and subsidize it in a complex economic climate.”

For now, the old A&B Sound is providing a venue for artists like Lukacs to show outside of a traditional gallery environment. It’s a luxury few artists come across but one that Lukacs relishes, if only because, as he explains it, “showing the work is a way of completing the process.” Currently not represented by a gallery, Lukacs admits that his paintings need to carry on and live outside the studio. It’s exhibitions like the one at 556 Seymour that allow him to complete that circle.