All images courtesy of Thermomix.

Counter space in my kitchen is at a premium. There is no room for gadgets that don’t pull their weight. I don’t own a microwave (heat it up on the stove), a food processor (there are knives for that), or a panini press (just, why?).

Even my trusty mixer is kept in a cupboard, pulled out onto the dining room table when there are cakes to be baked. The rice cooker, toaster, and coffee grinder, on the other hand, are out and permanently plugged in. The Vitamix and the Instant Pot currently take up real estate on a butcher block, but the latter’s days are numbered. (Have I used it once this year? I don’t think so.)

The new contender is a Thermomix TM6. This tool (visible on the benches of many a professional cooking show) is presented as the latest magical appliance—a culinary contraption that will have you creating dishes you never imagined you could pull off at home. But aren’t they all?

I really have no idea what to expect of this machine as I plug it in. It’s sizable, but no more so than a stand mixer at its base, and only marginally taller than the Vitamix. Despite the promise of myriad functions, there is only one movable dial on the front (as well as the on/off button). The only place I can put it is on the kitchen island, connected by an extension cord to an outlet by the stove. This is a temporary trial arrangement.

The first thing that marks this out as a different tool is the touchscreen that springs to life when you switch it on. Swipe left, and you see a screen full of icons—heat, blend, thicken, dough. Swipe right, and you enter the Thermomix recipe collection (named Cookidoo). As with all appliances that say they can do everything, it’s hard to know where to start, but there is dinner to be made, so the humble cauliflower cheese will be the first test. 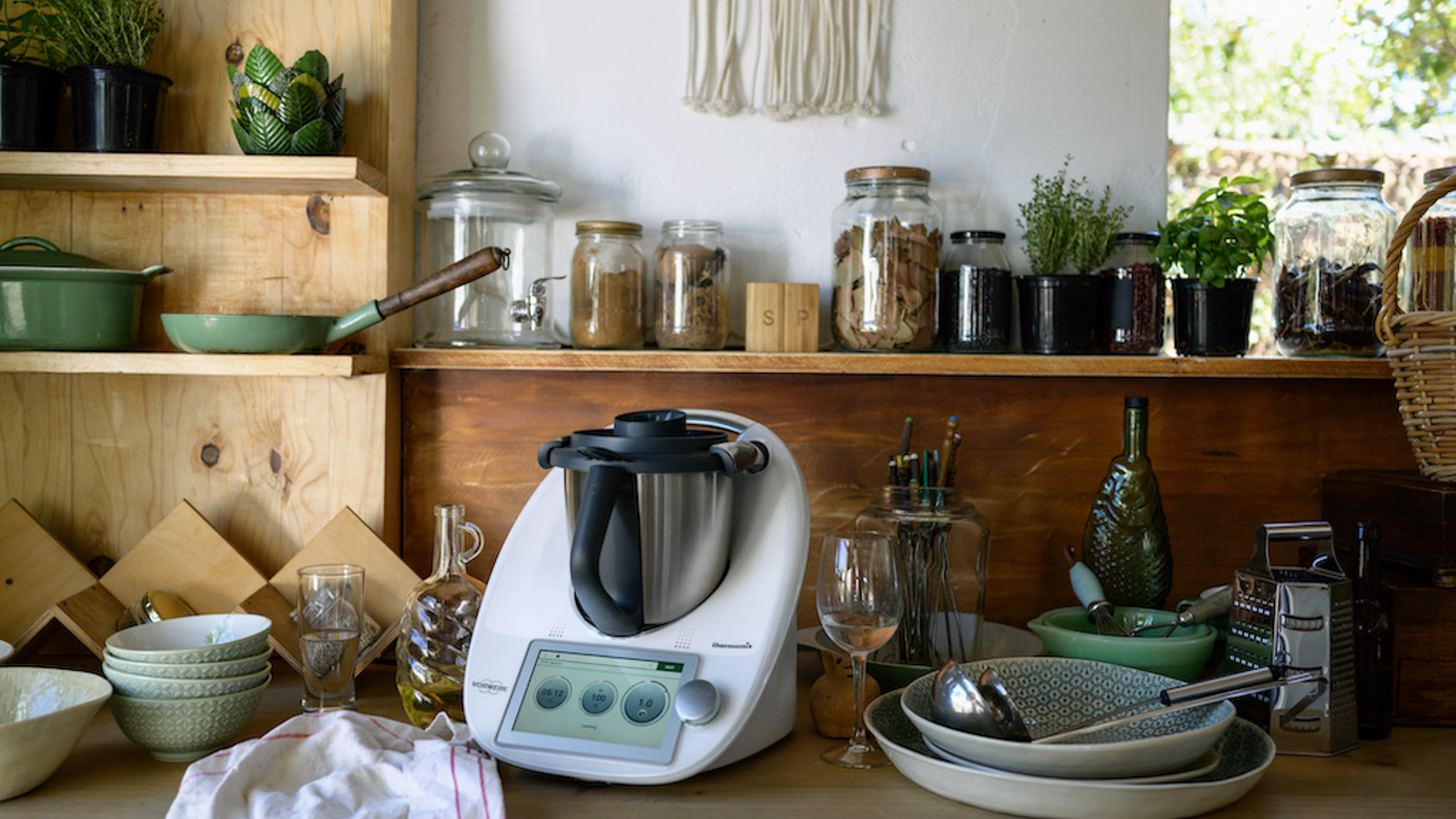 I pull up a recipe on Cookidoo. The steps are broken down and appear one-by-one on the touch screen. I fill the blender base with cold water, attach the steamer tray, fill it with cauliflower, and turn the dial to the level prompted. The Thermomix does the rest: the water boils, the cauliflower is steamed. Fine. Next the cheese sauce. In go the butter, milk, and flour, and I turn the dial. A few minutes later, I have a béchamel ready. No lumps, flour cooked out—no stirring and watching. Okay, that was easy.

Next up is risotto (no stirring) and soup. All good, but I am still looking for the key to why this gadget deserves a permanent home. As I describe it to friends—many of them not enthusiastic or accomplished cooks—their eyes brighten and jaws drop. When I explain you can plan your week’s meals, and (if you download the app on your phone), you arrive at the grocery store with your shopping list written for you, there are gasps.

I’m beginning to think I’m looking at this machine from the wrong angle: an experienced home cook wants to enhance their technique; a harassed and exhausted parent just trying to get a decent meal on the table with the minimum of fuss and effort needs something entirely different.

I turn to my sons, aged 22 and 15. The eldest is a neophyte in the kitchen, spurred on mostly (aren’t we all?) by a love of good food. The youngest can put a bagel in the toaster, but he’d probably grab a banana because it’s easier. He has, however, wanted to make a croquembouche for the longest time. Why shouldn’t a pyramid of pastry-cream-filled choux buns stuck together with caramel be his first real foray into cooking?

So I put on my apron and switch on the Thermomix. Then I stand back and watch as the boys start making choux pastry, the machine telling them what to do, weighing everything as it is added to the bowl. They follow it to the letter, lid on, turn the dial to the designated number, walk away for 10 minutes, and return to fully mixed and ready dough. Next is the pastry cream: in go the milk, eggs, sugar, vanilla. When the lid is lifted, the penny drops: “A whole bowl of hot custard. Just like that?” My youngest’s mind is blown. “It’s like the iPad of cooking utensils.” 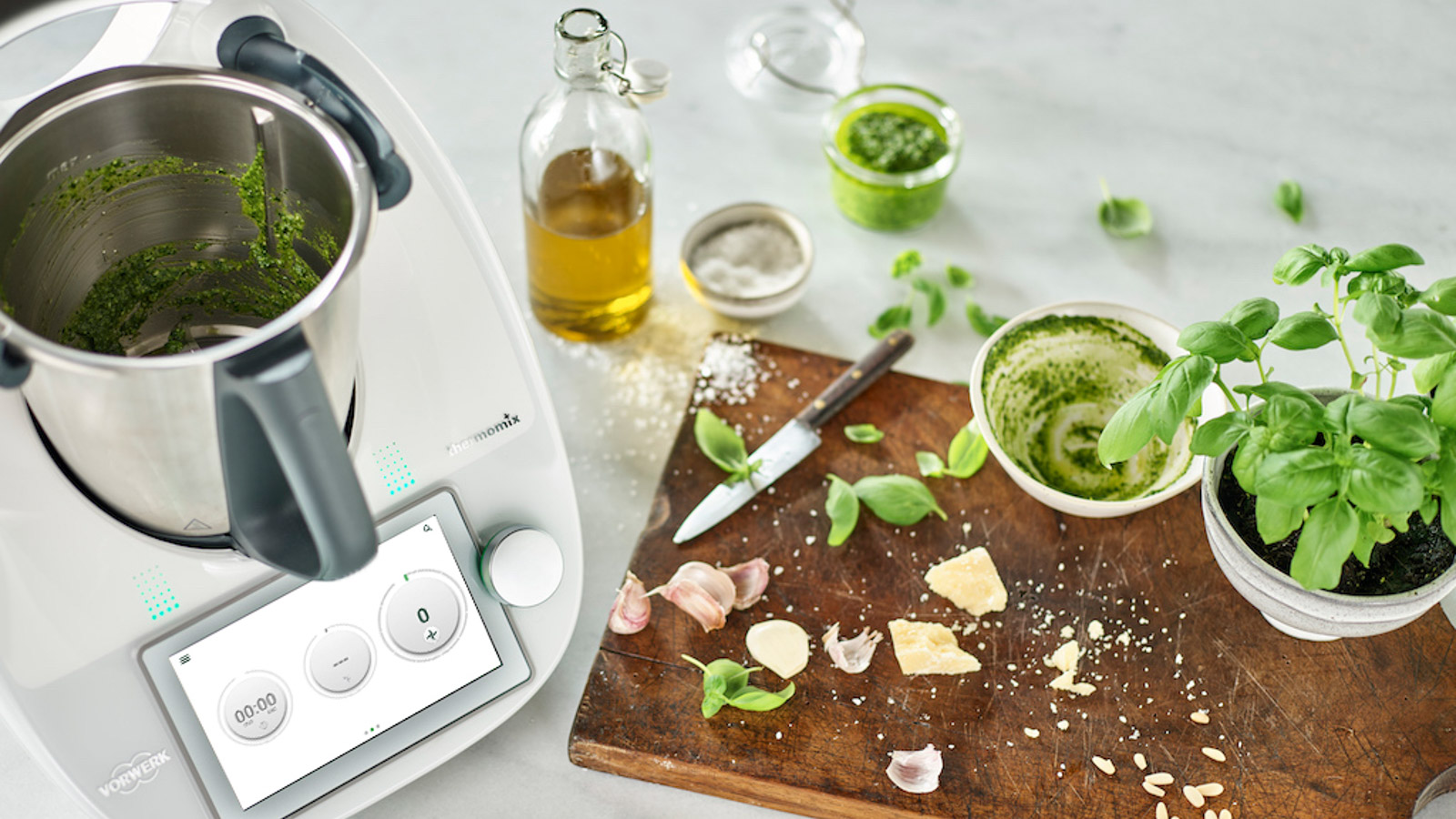 What for me is slightly disassociating about the machine—everything done for you, no watching, no tasting, no getting your hands dirty—my sons approach as they do all technology. Now there is a way to expand their repertoire beyond boiling pasta and whatever you can put between slices of bread. They don’t have to know anything about cooking, just how to swipe a screen and follow instructions. And it goes in the dishwasher. Win-win.

It’s not a cheap purchase, but it does cover most of the bases (the rice cooker and Vitamix become redundant, and perhaps the already semi-retired Instant Pot, too). The functions can be used without the predesigned recipes (of which there are thousands from all over the world), and that’s where I will be heading next. I’m also keen to get hold of the sous vide attachment.

Perhaps I will fall in love with this machine for myself, but I think it will be the boys who will benefit most. Whereas I learned to cook through trial and error and reading books, they are of a generation where the only knowledge you really need is at your fingertips 24/7. Yes, they required my help and advice with the shaping and filling of the profiteroles, but because the basics were simple and induced no stress, the fiddly bits were fun. And the results, delicious. Now, what’s for dinner?

Read more from our Wishlist.