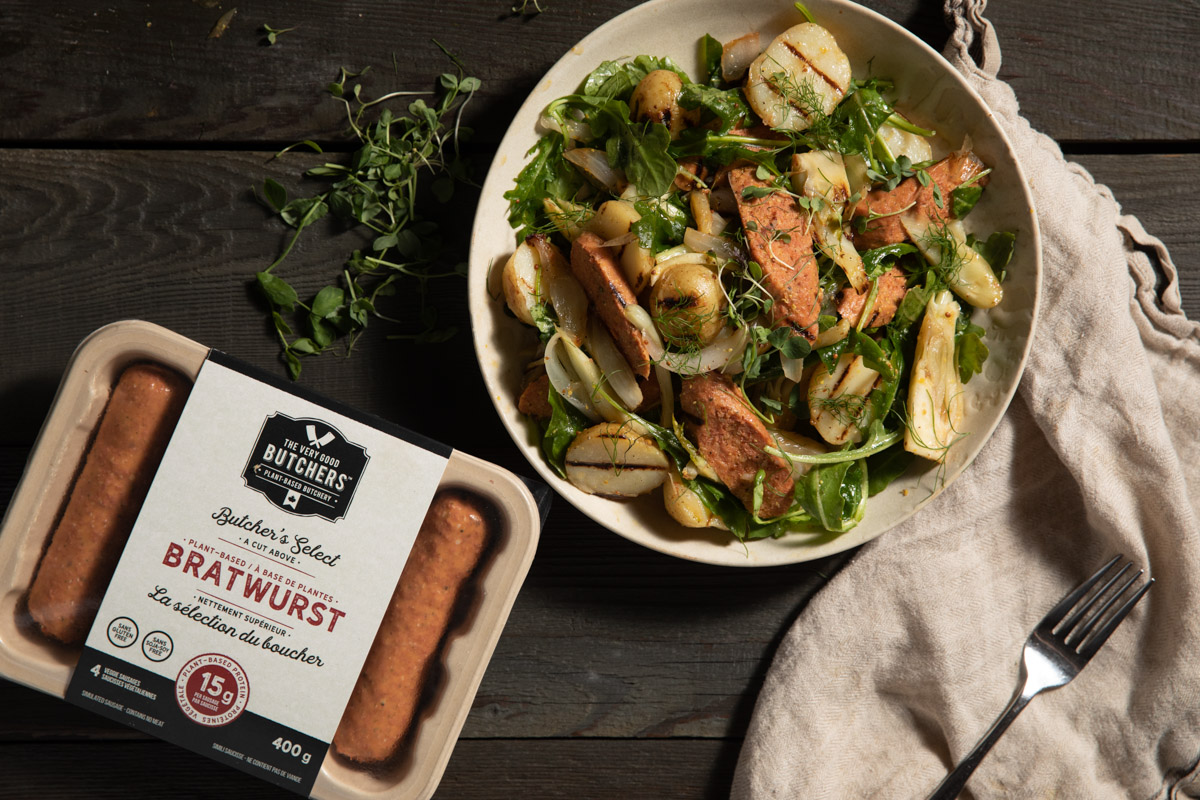 Here is how the sausage gets made, or at least how chef James Davison and his business partner Mitchell Scott make it:.

Pepperoni begins with organic adzuki beans, cooked in a large skillet with onion, garlic, and spices. Next, they grind up the mixture and add cooked barley. Once the mixture cools, wheat gluten is added to form a dough, which is stuffed into casings and finally steamed into firm sausages.

“Because there’s not much flavour from the beans, you really have to spend a lot of time perfecting that taste and getting it to something good,” Scott says. Herbs, nutritional yeast, and liquid smoke amp up the neutral beans, which become vegan burgers, breakfast sausages, and bratwurst. A new line features meatballs, and they’re working on filling smokies with cheese, scaling up their popular ribs, and perfecting bacon.

Davison and Scott’s company the Very Good Butchers began when Davison, a newly minted vegan, looked with disappointment at the grocery store shelves on Denman Island where he had moved with his young family in 2016. He had learned about plant-based cooking at Vancouver’s Heirloom vegetarian restaurant but still missed the taste of sausages he used to eat back home in England. The vegan meats he found at the store were, he thought, overly processed and full of ingredients he couldn’t pronounce. He began to experiment.

After a month of tinkering, Davison landed on two meats made from beans and vegetables: breakfast sausages and a classic veggie burger. At the local farmers market, his first batches sold out in 10 minutes. 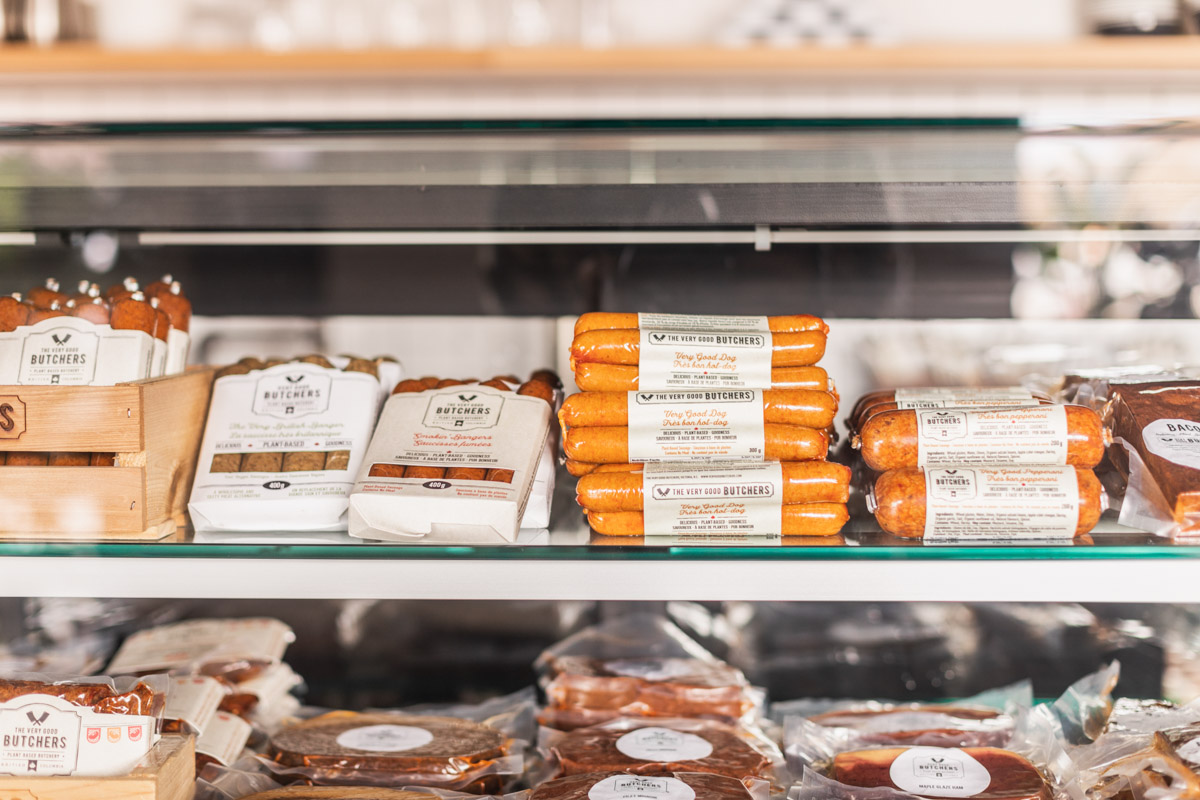 Scott, whose sister is married to Davison’s brother-in-law, quickly realized Davison was onto something big and joined forces. “I’d grown up vegetarian and had a lot of not so great veggie burgers over the years,” Scott says. “I tried his products at a family barbecue and was just blown away. He had really nailed it in terms of taste and texture.”

The duo mobilized. A Christmas pop-up stand at the Victoria Public Market laid the groundwork for a vegan butcher shop that launched there in early 2017. About a thousand people showed up on their opening day, Scott says, and the shop had to shut for a week to restock. From there, the business kept on expanding, with a pitch session on Dragons’ Den, a large production facility in Burnaby, and the recent acquisition of the Cultured Nut, a vegan cheese business rebranded as the Very Good Cheese Co.

Despite the growth of the business, Scott insists the products stay true to Davison’s initial ethos. While some vegan meats get a bad rap for overprocessing, Scott says processed needn’t mean artificial. “We’re putting real whole foods into it, so real beans, real veggies, like carrots, onions, beets, barley, herbs, and spices,” Scott says. Most produce is sourced locally, while the primary ingredient, beans, is from the Prairies. 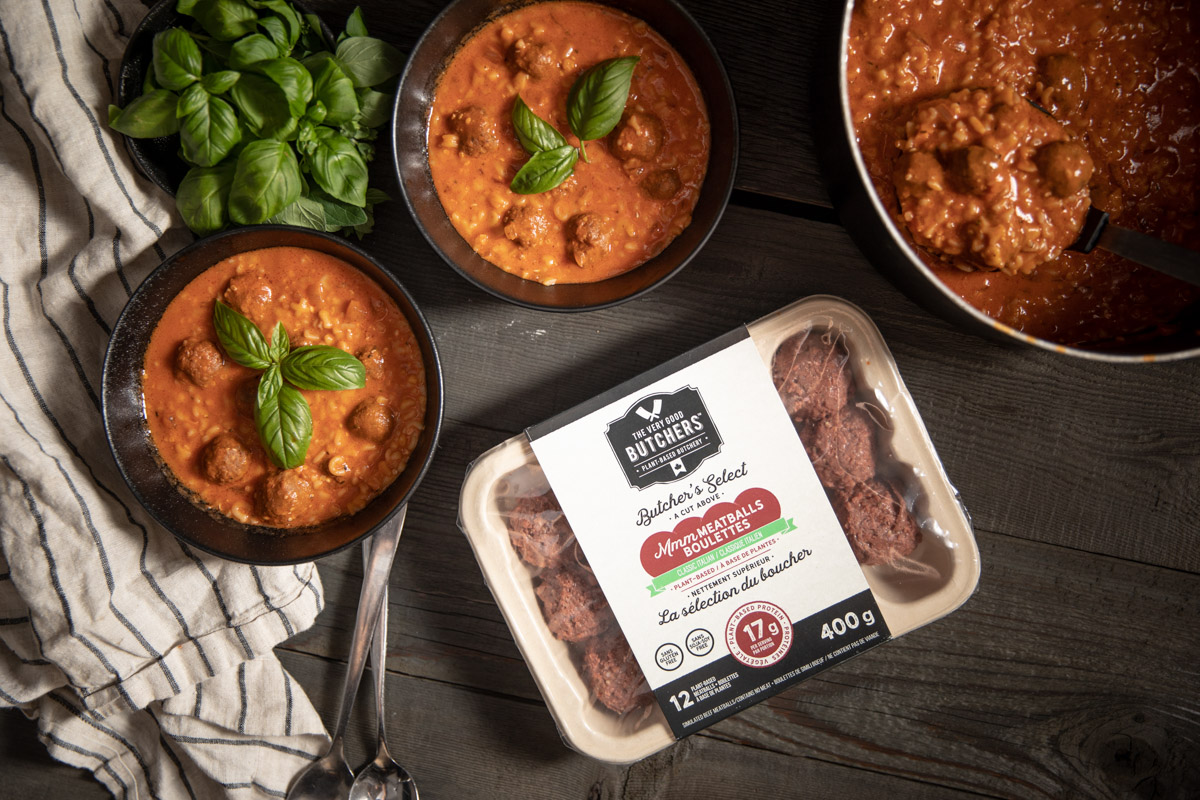 “For us, it’s that artisan approach. We took what started in James’ kitchen and figured out how to scale it,” Scott says. Creating consistent texture is tricky, especially when the water content of vegetables, such as beets, can vary. The research and development team tests the bounce of individual patties to check if they mimic chomping into a beef burger. “People are always going to compare it to a real burger at the end of the day, so we try to get something that’s close and tastes great but still has real food in it,” Scott says.

The Very Good Butchers is part of a boom in meat alternatives, partly driven, Scott says, by new interest in plant-based food from outside the small vegetarian and vegan communities. Increasingly, customers buy from the Very Good Butchers for environmental, health, and ethical reasons. Many older clientele, especially men, switch because their doctors have instructed them to cut out red meat, but they still want to have a burger instead of a salad. 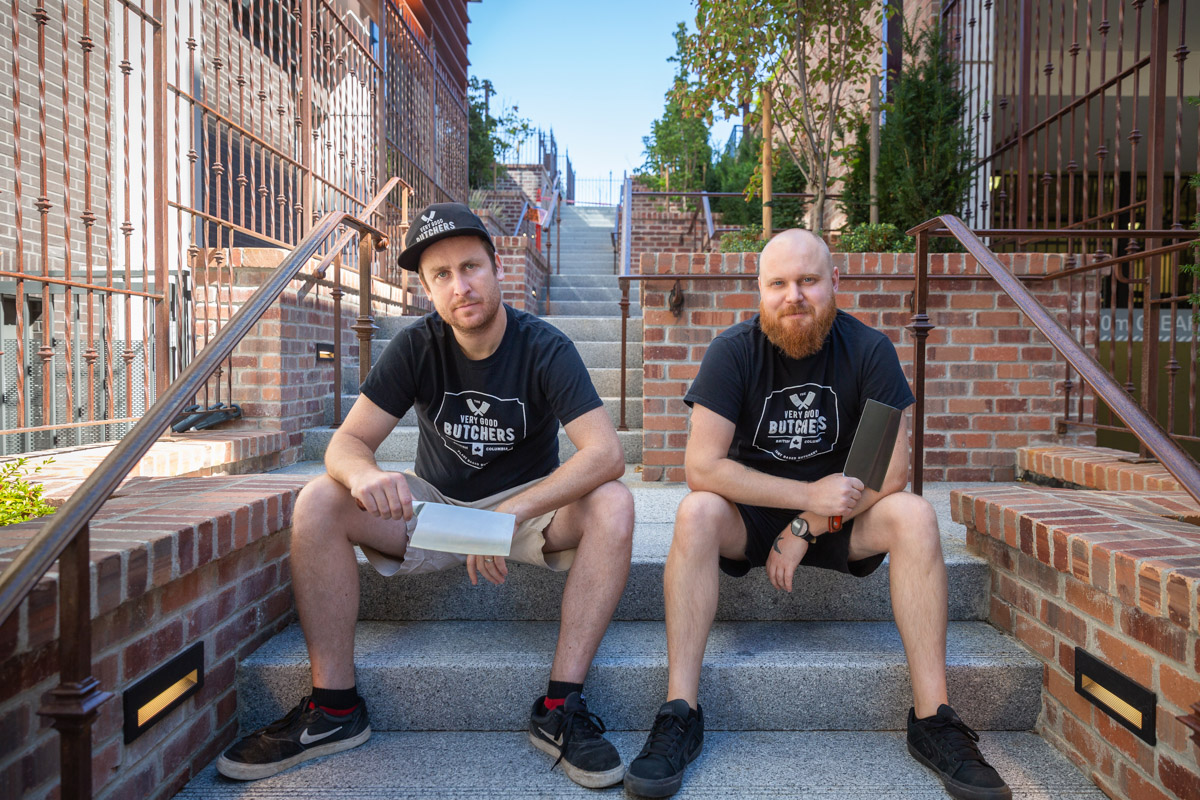 Even though the company sells online, Scott and Davison continue to offer a butcher shop experience so customers can see the products and ask questions. A second retail location is slated to open this spring in Mount Pleasant. The 10,000-square-foot space will include a butcher shop with deli cases stocked with meat and cheese, a production facility with a glass wall for full viewing, and an innovation hub on the mezzanine level. Similar to the Victoria store, a vegan restaurant will serve comfort food such as chili bowls and wings. “It’s showing people that plant-based eating is approachable and delicious. You can have a juicy burger and not have to sacrifice anything,” Scott says.

For those still skeptical about vegan meat, Scott urges them to give it another shot. “I think they’ll be pleasantly surprised,” he says. “Products have come a long, long way, and they’re as good or better than their meat counterparts—better tasting, better texture, but also better for the environment, health, and animals. So eat more plants!”