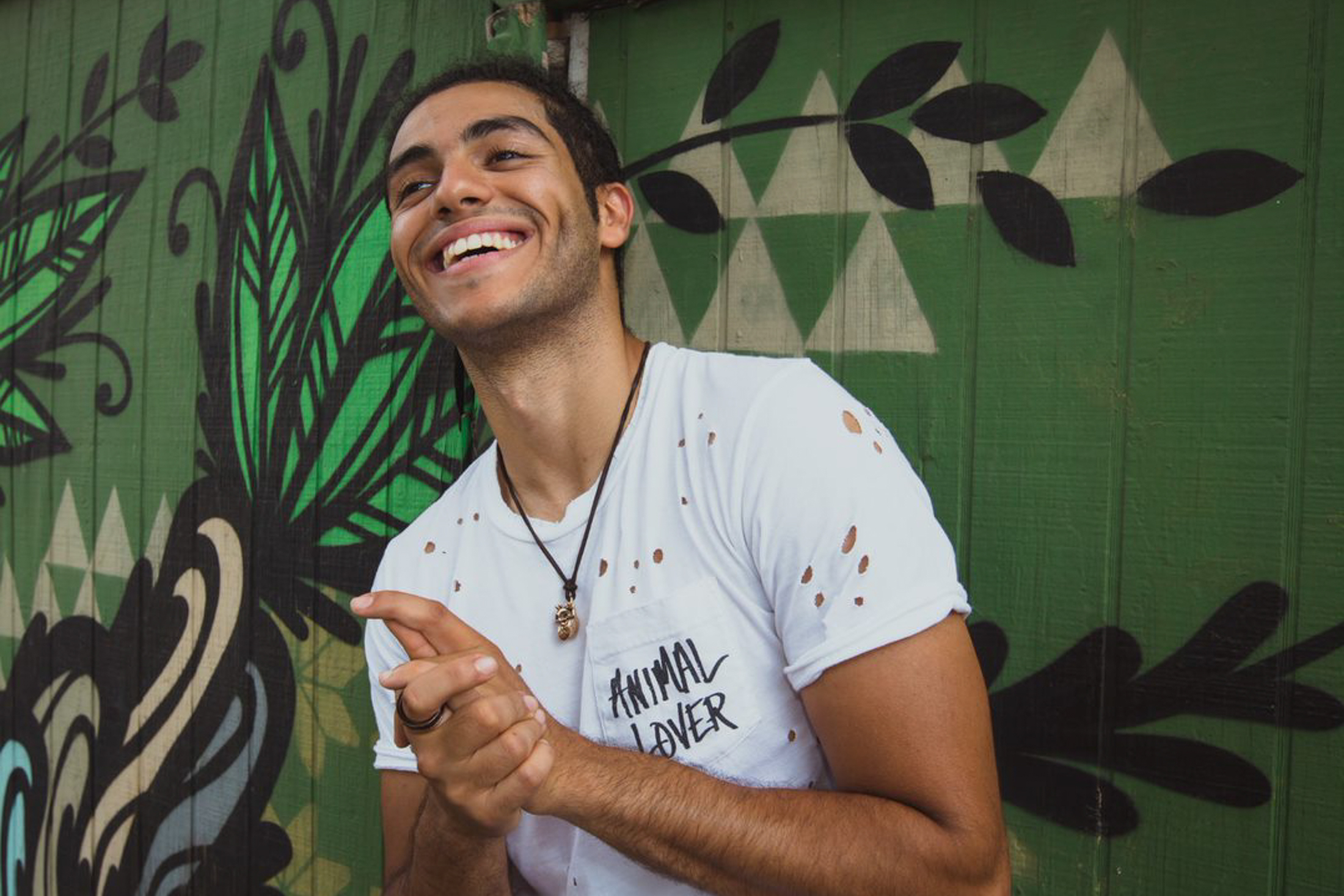 When Mena Massoud set out to write his first cookbook, it was, in part, to create a culinary legacy for his mother.

The Egyptian Canadian actor, who portrayed the titular character in 2019’s Aladdin, moved from Cairo, Egypt, to Ontario with his family at age three and settled in Markham, just outside Toronto. His parents did everything they could to support Massoud and his two older sisters—his mother worked at a coffee shop for a while; his father, a satellite engineer by trade, picked up odd jobs including delivering pizza and working at a VHS factory. No matter what, though, Massoud’s mother cooked for the family every night.

“I think it just ingrained in me a sense of, not only culture, but what it means to come together over a meal,” Massoud tells MONTECRISTO, speaking over the telephone from his home in Los Angeles, California.

Even before the family moved to Canada, his mother was known as one of the best cooks in their community in Egypt, he says. So it was food, in addition to speaking only Arabic at home, that helped retain a strong connection to his roots as he grew up in Markham.

Meat was often the star of those home-cooked meals, from cow intestine stuffed with Mediterranean rice, to kidney, liver, and heart pan-fried with butter, onion, and garlic. Being Coptic Orthodox, the family annually gave up animal products for about 100 days between Christmas and Easter. They didn’t call it vegan and it never occurred to Massoud at the time that it was vegan—still, for those months, he enjoyed his mother’s vast repertoire of plant-based recipes.

Massoud’s journey to veganism really took off in 2015 when he began researching how animal products impact our health and the environment. He gradually made adjustments to his diet, first cutting out red meat, then eggs, and finally fish. He quickly felt better overall, stronger and more energetic. Those benefits and that incremental approach is what inspired him to found Evolving Vegan—a company whose mission is to encourage others to integrate more plant-based foods and products into their lifestyle. For one person, that might mean giving up meat once a week. For another, it might be forgoing wearing leather. Or it might mean just adding a nut milk to tea or coffee instead of cow’s milk. Regardless, the Evolving Vegan way is judgement-free and “evolving” is the operative word. 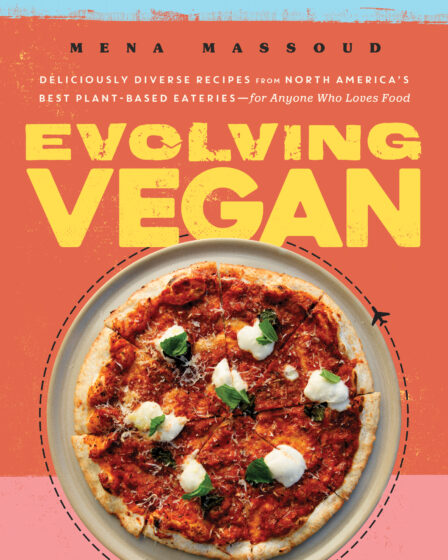 “I don’t want to convert people to veganism,” Massoud explains. It’s more about trying our best on an individual basis, whatever that might look like, to reduce our intake of animal products and, in turn, reduce our carbon footprint. “I think that’s the way that we’re going to save our planet, save our health.”

Evolving Vegan’s first order of business was a cookbook-meets-travel guide of the same name. Lovingly assembled, it features original recipes from vegan restaurants in 10 different cities across North America, as well as a number of dishes from Massoud’s mother (such as her bamya, an okra-based stew) and some of his own creations, too (tofu pad Thai is one he’s perfected over years).

“One of the biggest things that people say about veganism is that it’s not accessible or, ‘Where am I going to eat? What am I going to eat?’” Massoud says. “And I wanted to show people that no matter where you travel in North America, you could find incredible vegan options.”

He was also curious to ask restaurateurs where they source their protein, and why they decided to go vegan themselves. So, on a modest budget, Massoud embarked on a road trip/eating tour. It was split into two expeditions with a couple of weeks on each coast, and the cities were carefully chosen to include both well-known vegan hubs, such as Portland and Vancouver, and perhaps unexpected gems such as Washington, DC. 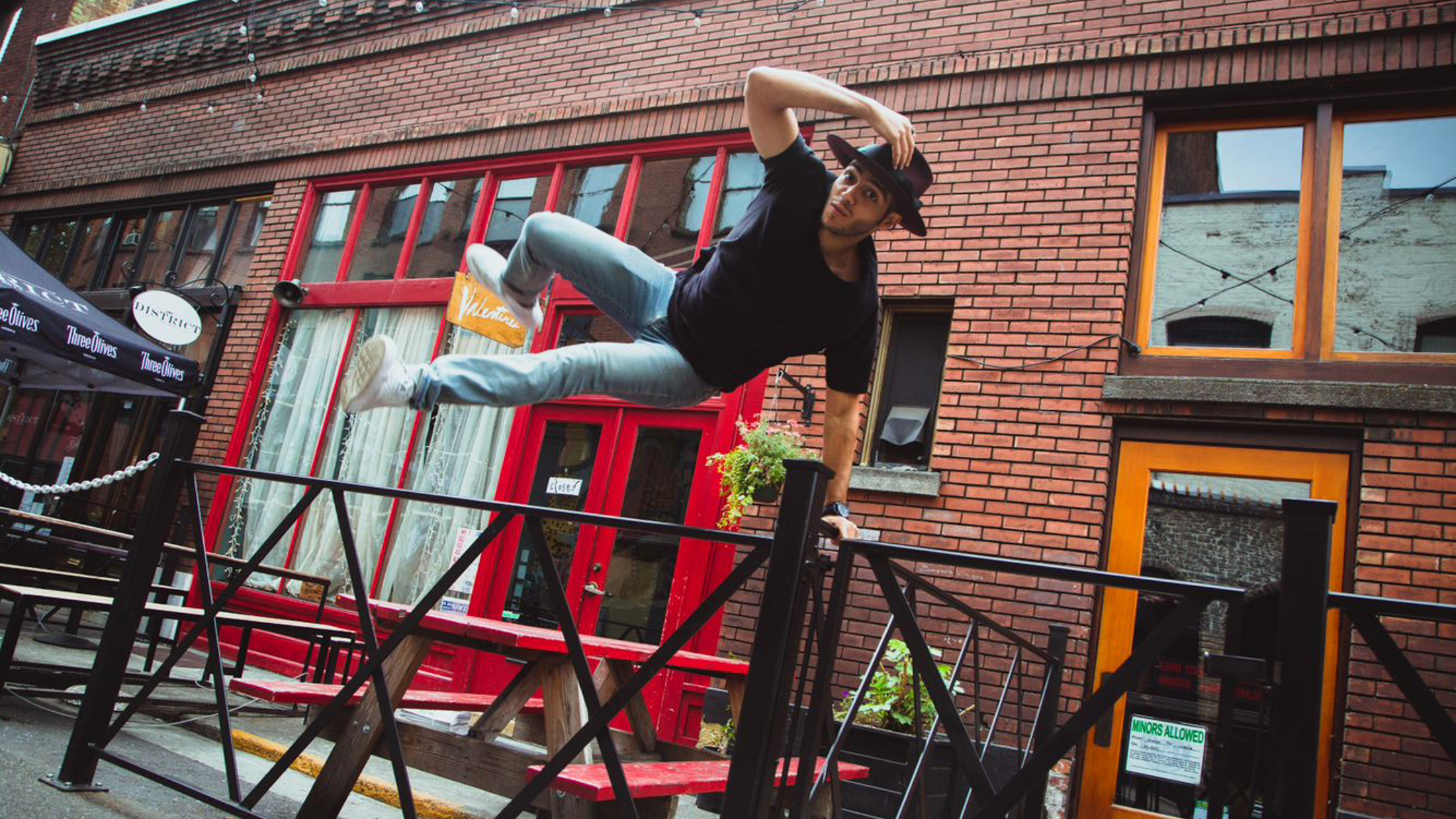 “Washington actually surprised me with how good the vegan food was and how much of a vegan community they had,” Massoud says. “That city was really a turning point for me. It really reinforced what I thought—which was you can find good plant-based food anywhere you go.”

“Chickpea was amazing,” he says. “The guys were lovely. And you also have Virtuous Pie, which started in Vancouver and now they have locations in Portland and Toronto. Vancouver definitely has a plethora of options, for sure.”

San Diego’s Trilogy Sanctuary, a yoga studio with its own organic café, also stuck with him. In Evolving Vegan, it’s filed under one of a handful of “hero spotlights” for its menu items such as chorizo and gluten-free brownies, all made in-house by owner Leila Dora.

“It’s just an incredible place,” Massoud continues. “[Leila] let us in, she taught me some aerial yoga, and then we sat down, ate her food, and talked.” 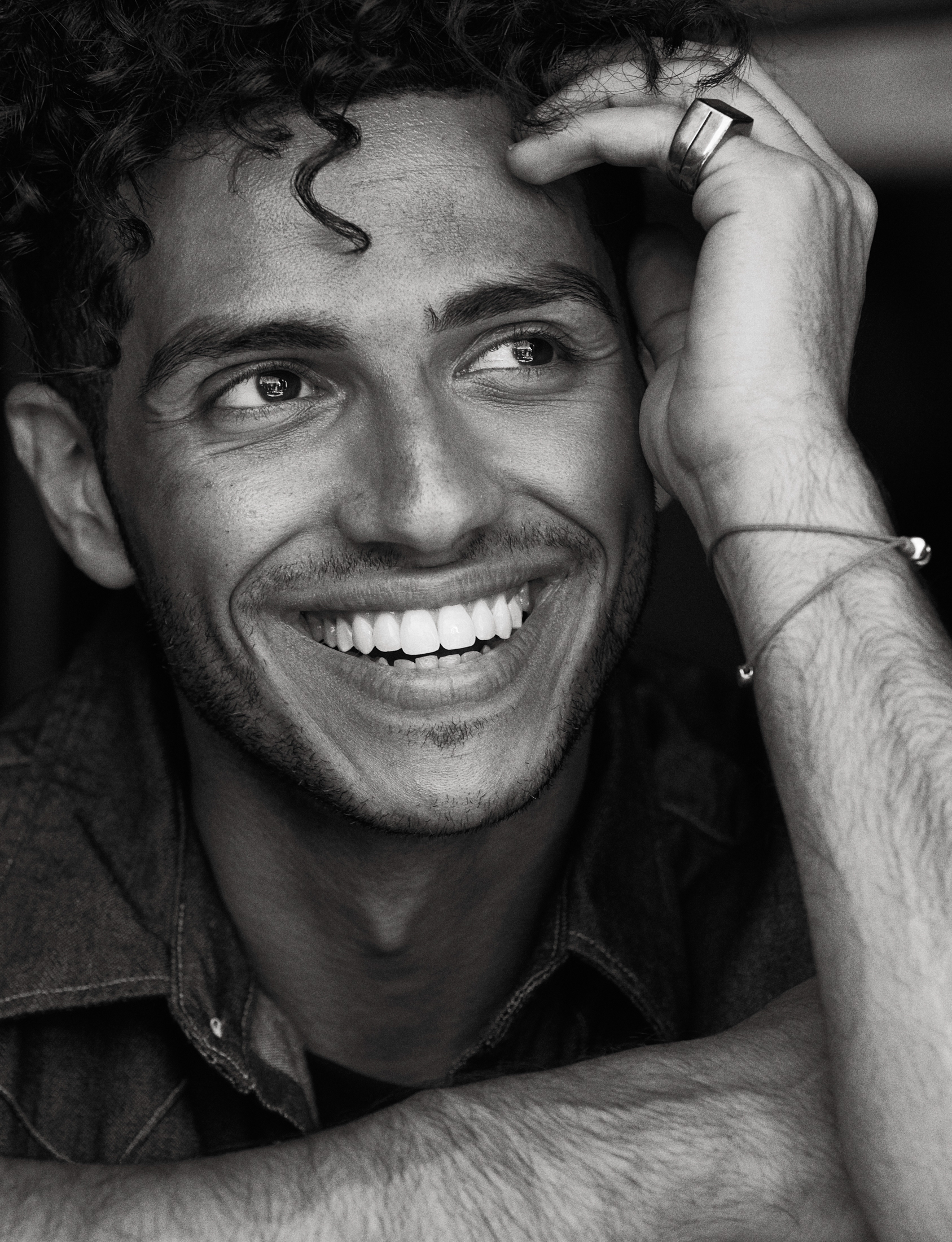 For Massoud, the places he discovered along the way deepened his appreciation for restaurateurs willing to take a chance on vegan eateries and reinforced his commitment to plant-based alternatives.

Perhaps one of the most impressive things about Evolving Vegan is its breadth of culturally diverse cuisines, featuring every type of meal imaginable from breakfast to dessert. There’s Mame noodle soup (a take on a traditional Taiwanese chicken noodle bowl), and this Ethiopian dinner from New York, with detailed instructions on how to create its critical ginger-garlic paste, as well as basbousa, a coconut crumble cake that’s a longtime Massoud family favourite.

Having toured North America in search of plant-based inspiration, Massoud will now turn to the  travel series he’s developing to showcase vegan dishes from around the world.

And his mother’s thoughts on his new book? “I think she’ll be very happy with the outcome,” he says. 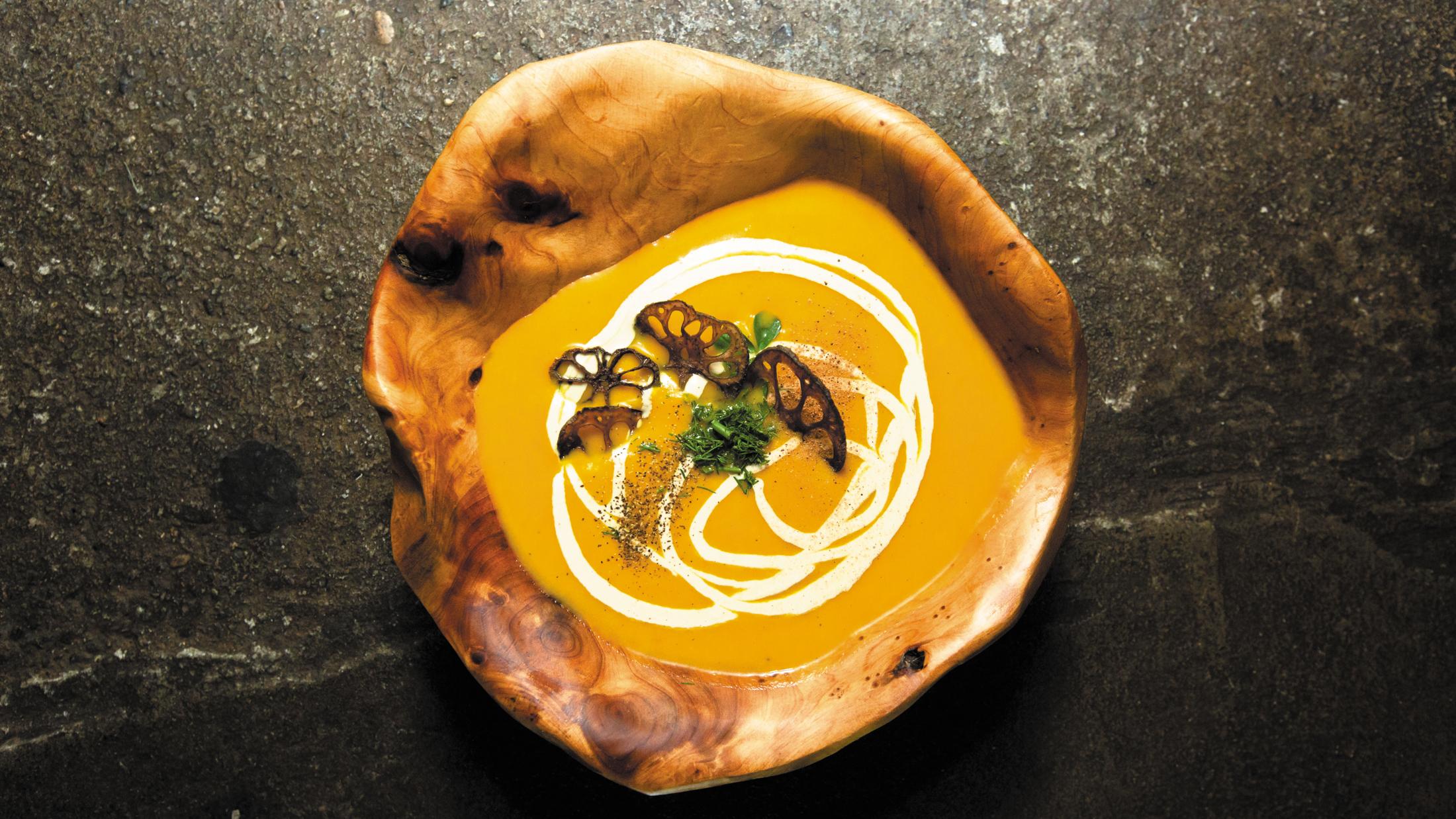 The following recipe from Evolving Vegan by Mena Massoud is reprinted with permission from the publisher, Tiller Press, an imprint of Simon & Schuster. Copyright © 2020 by Evolving Vegan, Inc. All rights reserved.

I visited Indigo Age Café during the autumn season when they had beautiful squashes, root vegetables, and cranberries in-house, so naturally I was drawn to some of their recipes that were appropriate for Thanksgiving.

Nothing says “plant-based Thanksgiving” more than this recipe right here. It’s warm, comforting, creamy, and pretty simple to make, which means you don’t have to slave away preparing a Thanksgiving dinner for your guests. Who needs turkey?! It just takes away hours of time you could be spending with your friends and family.

For the butternut squash soup:

For the creamy cashew drizzle:

1 cup raw cashews, soaked in water to cover for 2 hours and drained

In a heavy-bottomed medium pot, heat the oil over medium heat. Add the shallot and garlic. Cook, stirring occasionally, until the shallot is softened, about 3 minutes.

Add the squash, celery, carrot, parsley, cinnamon, nutmeg, and cloves; season with salt and pepper. Add 2 cups water and bring to a boil, then reduce the heat to medium-low and simmer until the squash is very tender, 15 to 20 minutes. Remove from the heat and let cool for 5 minutes.

Rinse the blender jar. Working in batches, carefully ladle the soup (broth and vegetables) into the blender. Cover the blender jar, place a towel over the lid, and blend until smooth (be careful of splatter,  as soup will still be hot).

Pour the puréed soup into four deep serving bowls; repeat to purée the remaining soup. Swirl some of the creamy cashew drizzle in each bowl. Sprinkle with pepper, garnish with the dill, and serve.

Tip: For an extra-special treat, dehydrate your own lotus root for garnish. Cut the lotus root crosswise into very thin slices and place them on a baking sheet. Coat with oil and season with freshly ground black pepper, sea salt, and paprika. Bake at 325ºF for 45 minutes until crisp, flipping the slices once halfway through.