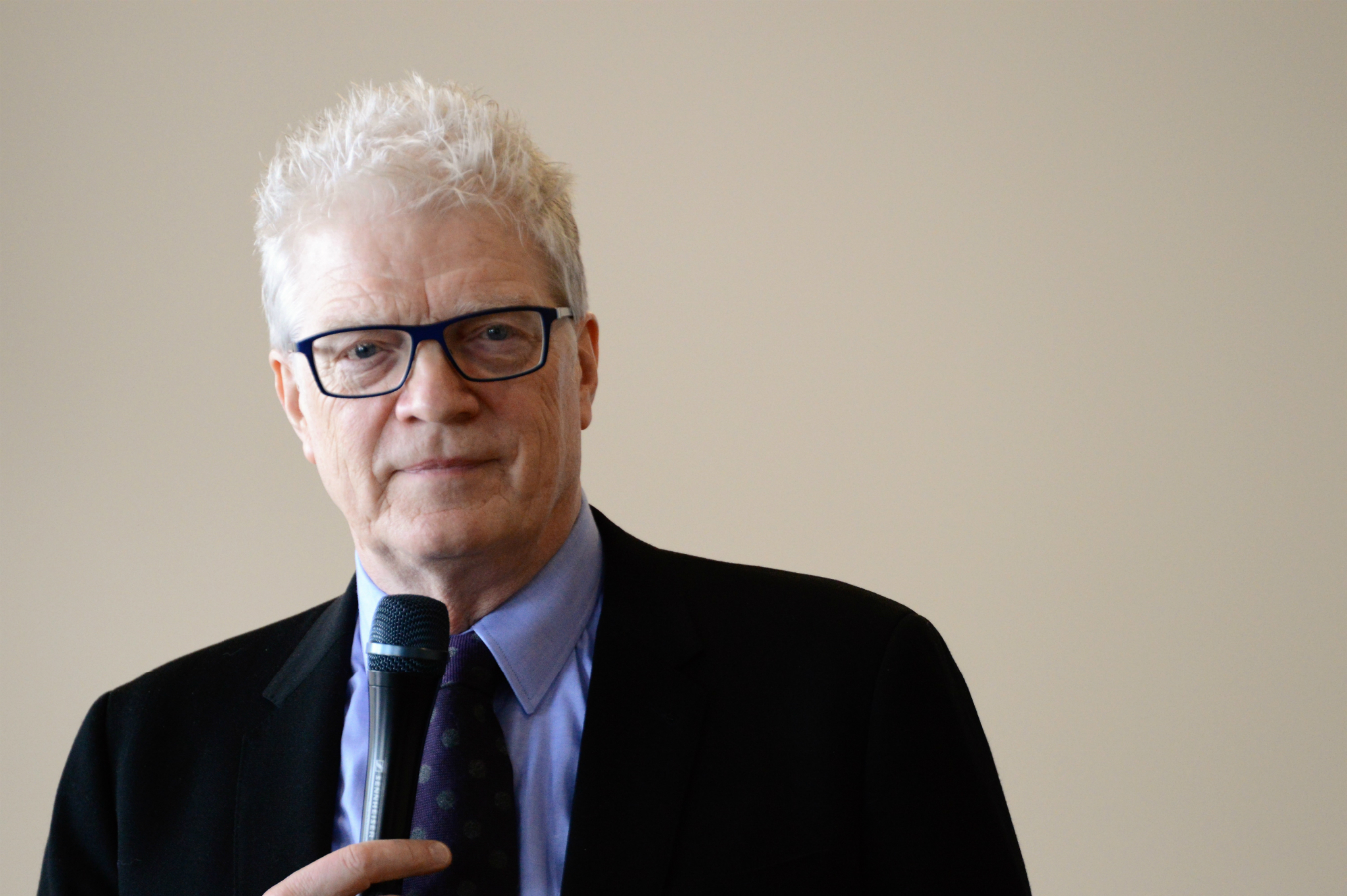 Sir Ken Robinson has made a high-profile career out of following his passion for pedagogy—specifically for advocating new models, new structures for educating our children. He has written numerous articles and co-authored several books, and has four books to his own credit exclusively. Fair to say, he is a significant figure in education reform. And then there are his TED Talks.

“Do Schools Kill Creativity?” (2006) has been watched over 40 million times, making it one of the most popular TED Talks ever. A follow-up lecture, “Bring on the Learning Revolution!” (2010), is soon to top seven million views. So when Robinson accepted the Abbotsford Christian School’s invitation to speak to a group of educators as part of Learning Revolution Abbotsford, it was a full house at the Gateway Community Church, and at the end of the evening, a charmed house, too. His speaking style is engaging, witty, at times verging on a high-level, admittedly cerebral stand-up comedy routine. But he pulls his weightier observations into view effortlessly, seamlessly, and continually draws his audience to his central points. “All kids are gifted,” he says during his appearance, delighting every single parent in the room. “But I do believe we must not only adjust, but completely re-invent, our school systems. We are now more aware than ever about the conditions under which students learn best.”

He is fully mindful of the controversial nature of his advocacy: “These days, when you have a discussion at a dinner party about education, it often gets quickly contentious, the way religion and money do.” But he has a way of making his points appealing with some grounding and sobering facts. “The way our world is changing so rapidly, it is important to realize we have young people entering the education system this year who will retire in 2065,” he says. “There’s no way to predict how that future will look, but we need to take steps to make our education system serve these students well, to make what they learn, how they learn, interesting and useful.”

One of Robinson’s central tenets is that “we get educated out of creativity. The pressure is to deliver the highest amount of correct answers on examinations. But the truth is, if you are afraid of getting it wrong, you will not be creative.” He believes examinations should be diagnostic, not the end achievement, and wants to dismantle the current universal hierarchy of subjects in which mathematics and languages are at the top, humanities in the middle, and the arts at the bottom. He sees the entire tradition of education as “predicated on the idea of academic ability, begun near the start of the industrialized era, a protracted process of university admission. The value of university degrees has never been lower, yet the system pushes students into bachelor’s degrees, then master’s degrees, and on to doctoral programs.” Bringing this all back to grade school, Robinson asserts that children are most likely to flourish with a broad curriculum that celebrates their several talents, not just a small sampling of them.

“Think of it: Shakespeare was once in someone’s English class, after all.”

For him, “education is not a mechanical system, but a human one. Think of it: Shakespeare was once in someone’s English class, after all.” Robinson asserts that human intelligence is “diverse, dynamic, and distinct.” This means a healthy education system should encourage and nurture these qualities, leading to a scheme of learning in which each individual can thrive according to their unique interests and abilities.

Robinson uses dance choreographer Gillian Lynne as a prime example. She choreographed, among other works, the original productions of Cats and Phantom of the Opera. But as a schoolgirl, she was deemed to have a learning disability, and as Robinson describes it, was perhaps “suffering from ADHD before there was even a diagnosis for such a thing.” Lynne’s mother took her to a specialist, who interviewed both mother and daughter, then quietly turned on his desk radio, and took the mother with him outside the office. There, they witnessed the young girl jump out of her chair and begin to dance to the music on the radio. The specialist turned to Lynne’s mother and said, “Your daughter does not have any learning disability. She is a dancer. Take her to dancing classes.” Of course, we all know how that story ends. Robinson says the same principles that were applied to the young Lynne should be used for each and every student: rather than forcing compliance as a standard cookie-cutter process, we should endeavour to provide children with the right tools and opportunities to grow, through education, into their best selves.

He is optimistic about how things can improve. And it is not only changing how students learn, but how they are taught; transformation is symbiotic. “Teachers are highly under-valued in our culture, I believe,” Robinson says. “Teaching is a creative profession, not a delivery system.” While his books draw out his ideas in much more detail, the talks he gives are agents of change, small steps along a path to, if not outright revolution, then at the very least profound reform.

This is all a very big ask, but Robinson sees it as absolutely necessary. “Our hope for the future is our children,” he declares. “We have to get this right.”