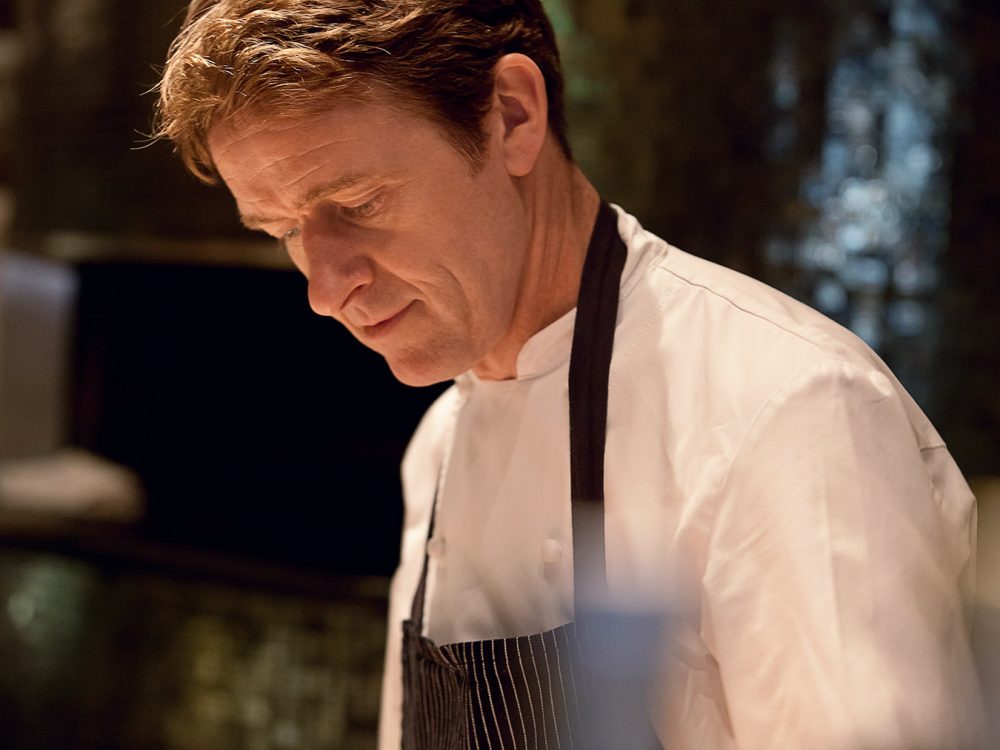 The new counter space in front of the kitchen is almost a foot lower than before, boasts several warming stations, makes for an easier pass from kitchen to server, but most importantly reveals the workings of the kitchen and its cooks in an at once more expansive yet intimate way, with the stoked fire deep in the belly of the giant wood-burning oven radiating warmth, to the tune of 800 degrees Fahrenheit should the need arise, making the implicit promise of a great evening out become a reality, table by table, as Andrew Richardson, world traveller, thoughtful chef, makes his mark at CinCin.

The early days were at Whistler’s Araxi, and over the intervening years, chef Richardson worked at various restaurants in various places, but “I always remained friends with Jack.” That is, owner Jack Evrensel. He also remains good friends with former colleague Thierry Busset, “A perfectionist if there ever was one”, says Richardson. He looks around the room, still empty at this early hour, except for the bustle in the kitchen, and says “It was a great time for me to come back to Vancouver, and to come to CinCin, a challenge I felt ready for. Volume, in particular: can you do great food in a high volume situation? Yes, but you have to figure it out, the structure of staffing, to reinforce the day to day practises of the restaurant. I had eaten here many times over the years, so I had some ideas, many based on my Italian experiences.” Those Italian experiences were preceded, though, by a stint at the French Laundry. “I went for two weeks, and stayed for six weeks. I wanted to learn, to see the underneath of it all. They rewrite their menu every day, actually the previous night after closing, and still put their hallmark on it. I learned how important leadership is,” Richardson says. He also spent time at Sooke Harbor House, “where Sinclair Philip and Edward Tucson put their garden, and the local fishing, to good use every day.” Now, about those Italians: “the mantras, of local and seasonal, of course. But the simplicity of the food on a plate, strip away the excess, that was the big thing for me. I had CinCin in mind all through my travels in Italy.” He smiles, perhaps remembering a house-made agnolotti stuffed with squash and truffle in Rome, but then goes on. “The point is we’d love to do a ‘local’ cuisine here. Is there really such a thing a Italian food outside of Italy? Does there need to be? And we are closer to that truly local food than ever before. Even the wood we use in the oven; it’s alder, unique to this region.”

A good chef knows a thing or two about running the entire restaurant, not just the kitchen. “Leadership, in the kitchen and on the floor, is extremely important. I spent some time with Francis Mallman from Argentina, we were in New York at the same time, and I understood how a great experience is about a time, a place. Technique, yes, but I like the idea of keeping it simple as possible, though that can mean many different things.” Richardson acknowledges, happily, that food knowledge in Vancouver is much greater than it was a decade ago. “Appreciation is greater, and the expectations are higher.” This all sits well with Richardson. After his stints in California, at a Michelin-starred restaurant in Newcastle, U.K, where “people were very open to new things”, and at Blink in Calgary, this all seems like a homecoming for him. The bistecca alla fiorentina, the wood-fired pizzas, a specially-raised rabbit, “They just get it right, the meat is amazing” says the chef. The halibut and the pasta, make their appearances, all graced with Pemberton potatoes and Fraser Valley produce, and locally foraged mushrooms. The main room at CinCin has always been inviting, the ambiance bespeaking its Mediterranean orientation. The influences are there, but Andrew Richardson is constantly, quietly reinventing, and pleasing people every night as he does so.