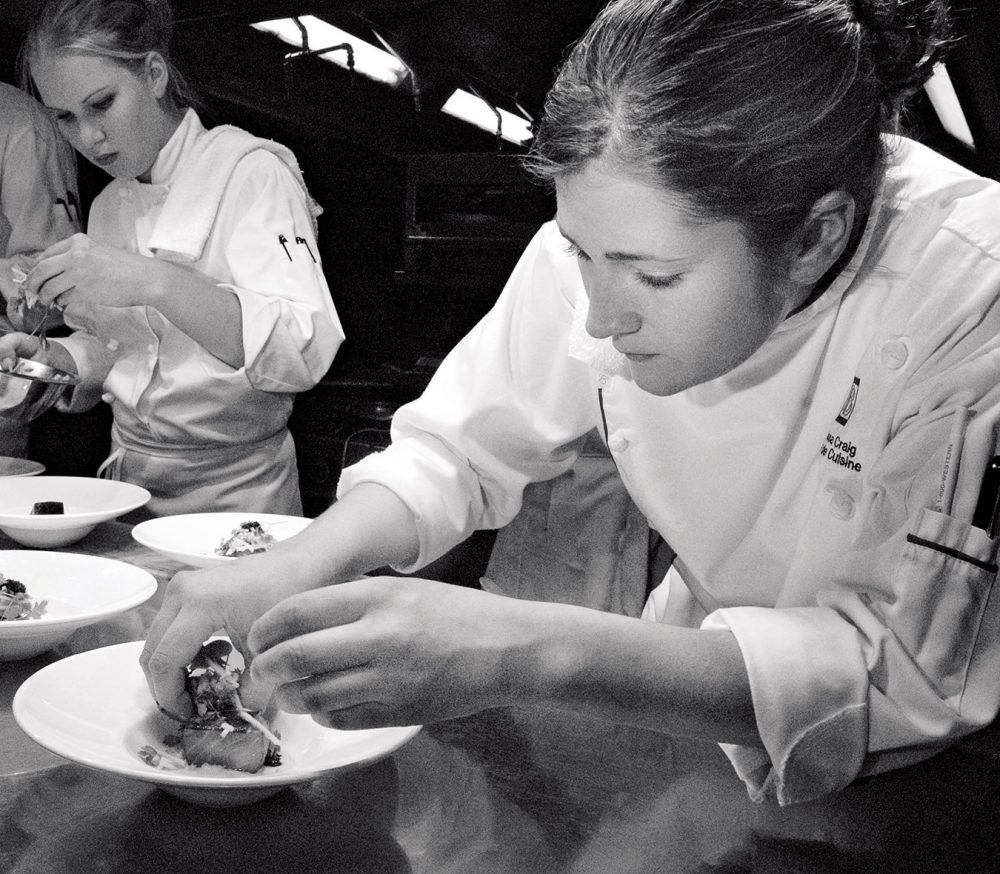 A row of order slips flutters gently overhead. Plates slide onto the counter beneath a cluster of gleaming copper lamps. There’s a steady flurry of activity in Bearfoot Bistro’s open kitchen as line cooks scurry to and fro. Yet at the centre of this whirlwind, executive chef Melissa Craig runs the pass with a definite sense of ease and a quiet strength.

She’s come a long way from her first childhood forays into cooking. “I’ve always loved it,” she reflects. “When I was a kid, I’d stand on a chair in the kitchen making Caesar salad and experimenting with hollandaise sauce.” Upon graduating from the culinary arts program at Malaspina University-College (now Vancouver Island University), she became the first woman to win the Canadian National Apprentice Competition—no small feat for the 20-year-old and a foreshadowing of future success.

Craig finished her apprenticeship at Sooke Harbour House and spent a season as the sous-chef at King Pacific Lodge, a luxury B.C. fishing resort, before travelling and working her way through Australia for the better part of a year. Her return to Vancouver brought with it the prospect of a position at Lumière; however, she eschewed city life in favour of Whistler’s slopes and an executive sous-chef spot at Bearfoot Bistro. Since then, it’s been full speed ahead. She quickly rose through the ranks, becoming chef de cuisine within a scant six months and executive chef just a year later at the tender age of 25. And in 2008, Craig prevailed at the Canadian Culinary Championships, the nation’s most prestigious culinary event, despite her last-minute entry into the arduous three-day competition. “Pino [Posteraro] actually won [the qualification at] Gold Medal Plates and I came in second,” she says. “But he couldn’t make it [to the championships], so I ended up going with only a month’s notice.  I had absolutely no idea that I had a shot at winning.” She took top honours, and her victory vaulted her into the spotlight.

The ensuing gauntlet of media appearances, judging duties and travel distanced Craig from her kitchen, and she was eager to close that gap and regain culinary focus. Just in time, as the 2010 Olympic Winter Games were right around the corner, and things were about to kick into high gear. “The Olympics were 17 straight days of three full turns: breakfast, lunch and dinner. I put up the extra staff at my house and slept maybe two hours a night. It was madness.”

“I hold everything in,” she remarks. “People say I’m super calm and I run a quiet kitchen. The guys are busy and I’m cooking with them, not on the other side of the pass, so I don’t let it out. I can’t lose it because then my staff will lose it.” Her well-controlled equilibrium translates directly to the plate; she has an exquisite sense of flavour and textural balance. And Craig deftly walks the line between local and luxe. “I do order the best of the best from around the world. I still serve caviar, foie gras and white Alba truffles,” she says. “But I won’t use tomatoes in the winter even though they’re available.” As always, the unflappable Melissa Craig.